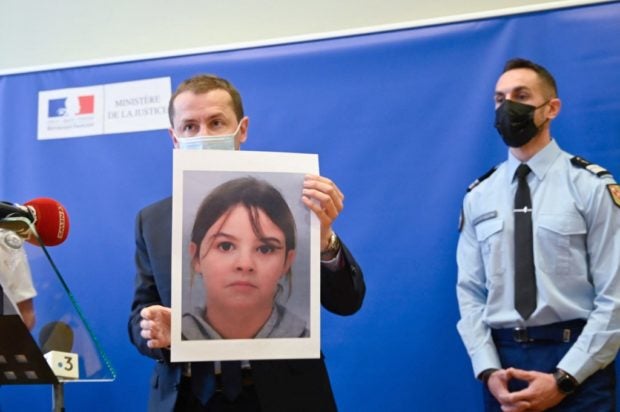 French public prosecutor Nicolas Heitz (C) holds a portrait of missing child Mia Montemaggi during a press conference at The Epinal Courthouse in Epinal, eastern France on April 14, 2021, following a kidnapping alert which was triggered for the eight year-old girl on April 13. Photo by SEBASTIEN BOZON / AFP

NANCY, France — An eight-year-old girl was rescued in Switzerland on Sunday, five days after being kidnapped from her grandmother’s French home in a “military” style operation with the alleged involvement of her mother.

After a massive search, investigators found the girl, Mia, and her mother Lola Montemaggi in a squat inside an abandoned factory in the Swiss municipality of Sainte-Croix, French prosecutors said.

The 28-year-old mother was arrested along with five men accused of helping her.

All five have been charged for the abduction of a minor, and four of them are being held in custody, said the prosecutor’s office in Nancy, northeastern France.

Three of the men posed as child welfare officials — even using forged identifications — to convince Mia’s maternal grandmother to hand her over at their home in the village of Poulieres near France’s border with Switzerland on Tuesday.

No violence was used in the abduction, but the public prosecutor of Nancy, Francois Perain, said it was like a “military operation,” with the “extremely well-prepared” kidnappers even giving it a code name: “Operation Lima.”

They had walkie-talkies, camping gear, fake license plates, and a budget of 3,000 euros to cover expenses, the prosecutor said.

The kidnappers were not known to police but were described as part of the same “community of ideas”.

“They are against the state and mobilized against what they call a health dictatorship,” the prosecutor said, adding that for them “children in care are unfairly taken from their parents”.

After the kidnapping, three of the men and her mother walked over the French-Swiss border, taking turns with the child.

Then a man nicknamed Romeo picked up Mia and her mother in a Porsche and drove them to a Swiss hotel.

They then spent a night with a woman who was a “sympathizer of the movement” before arriving in Sainte-Croix.

Five people linked to the kidnapping, aged 23 to 60, were arrested in France from Wednesday to Friday.

Mia is safe and in good health, and a psychologist and social worker would take care of her before she is handed back to her grandmother, the prosecutor said.

But with the story becoming big news in France, intense media pressure meant they would not immediately be reunited in Poulieres, investigators said.

The mother Lola Montemaggi did not resist arrest when Swiss investigators arrived at the abandoned factory in two vans, though Mia screamed, witnesses told an AFP photographer.

Montemaggi was taken into Swiss police custody and was expected to soon be the subject of a European arrest warrant for her extradition to France.

Nearly 200 police officers were mobilized in the search effort.

For her paternal grandparents, her rescue “is a huge relief”, they said through their lawyer.

“It is the end of nights of anguish and fear for the life of our little girl, in particular because of the extremist commitments of the kidnappers,” they added.