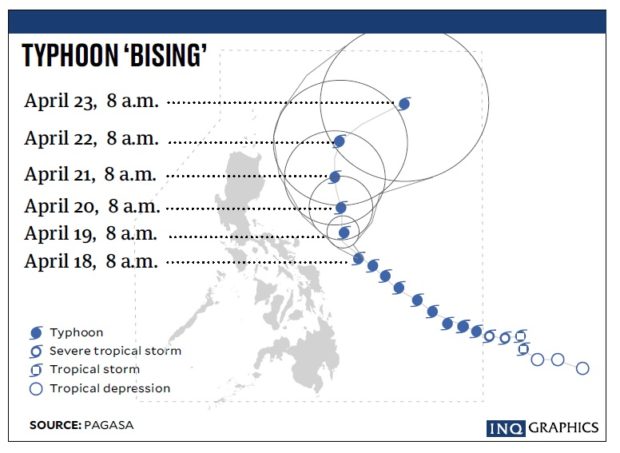 MANILA, Philippines — Typhoon Bising (international name: Surigae), the first storm to hit the country this year, has slightly weakened and slowed down, but continued to threaten the eastern portion of the country, according to the Philippine Atmospheric, Geophysical and Astronomical Services Administration (Pagasa).

The storm is expected to largely spare the Philippines, forecasters say. Still, heavy rains are expected over the Bicol region and Northern Samar as the typhoon makes its way over the Philippine Sea on the eastern side of the archipelago.

As of 4 p.m. on Sunday, its eye was seen 290 kilometers east of Virac town, capital of the island province of Catanduanes, where tropical cyclone wind signal No. 2 was already hoisted.

Bising on Sunday afternoon packed sustained winds of up to 205 km per hour near the center from a more destructive 215 kph earlier in the day. Its gusts also slightly weakened to 250 kph.

While landfall is still unlikely, Pagasa said a westward shift in the typhoon’s current forecast track may still result in significant impacts over the eastern portion of Southern Luzon and the Visayas.

Pagasa senior weather specialist Chris Perez said Bising will move generally northward until Tuesday, where it is expected to be around 500 km east of Aurora province.

By Wednesday, it is expected to turn toward the northeast and away from the Luzon landmass.

While it is forecast to gradually weaken throughout the forecast period, the storm is expected to stay within the Philippine area of responsibility for the rest of the week.

On Saturday, the Japan Meteorological Agency said Bising’s central barometric pressure had fallen to 895 hectopascals, making it the most intense typhoon to emerge in the month of April since satellite data began in 1960.

Local officials in the Bicol region have evacuated hundreds of residents in areas prone to flooding and landslides as Bising started to pour moderate to heavy rains over the region on Sunday.

At least 5,120 individuals or 1,389 families were evacuated in seven of the 14 towns in Catanduanes, including those in the capital Virac, said Roberto Monterola, chief of the provincial emergency operations center.

Evacuation was still ongoing in the remaining towns as of Sunday afternoon, Monterola said.

He said a storm surge has affected the eastern seaboard of the province as some towns began experiencing moderate to heavy rains early on Sunday.Power was shut down in the whole province early on Sunday and the water supply in Virac was also cut to protect intake pipes, Monterola said.

Catanduanes Gov. Joseph Cua said residents hoped to get through the typhoon with minimal damage, as they were still reeling from the effects of Supertyphoon “Rolly” (Goni) which hit Bicol in October last year.

“We are still in the recovery stage, particularly the abaca plantations (here). [We] hope Catanduanes and the Bicol region will be spared from Bising,” Cua said.

In Sorsogon province, about a hundred have been evacuated from coastal areas in Santa Magdalena and Irosin towns.

In Albay, 131 families were evacuated from coastal villages in the province. Residents near Mayon Volcano, Mount Masaraga and Mount Malinao were also urged to evacuate.

More than 2,500 passengers have been stranded in various ports in the country due to rains and rough sea conditions, the Philippine Coast Guard (PCG) reported on Sunday.

As of 12 noon on Sunday, the PCG said a total of 2,554 passengers, drivers and cargo helpers were stranded in Bicol, Eastern Visayas, Central Visayas and northeastern Mindanao.

In Bicol, 840 travelers, drivers and helpers, as well as five vessels and 285 rolling cargoes were stranded in the region’s ports.

In Central Visayas, the PCG said 166 passengers, 37 vessels and 85 rolling cargoes were stranded while four vessels and 19 motorboats were forced to take shelter.

In northeastern Mindanao, 365 passengers, drivers and helpers, as well as two vessels and 203 rolling cargoes were stranded.

The PCG suspended shipping operations on Friday until Tuesday.

The Land Transportation Office reported that 173 trucks bound for the Visayas and Mindanao have formed long queues along the Maharlika Highway in Camarines Sur and Sorsogon.

At least 10 vessels and eight motorboats also took shelter in the region due to strong winds and rough seas.

He said the Department of Social Welfare and Development has standby funds worth P556.4 million as well as stockpiles consisting of 370,058 family food packs amounting to P188.6 million as of 6 p.m. on Saturday.

Roque said the Department of Health has dedicated teams looking into the impact of the typhoon, especially in evacuation centers, amid the continuing threat of the COVID-19 pandemic.