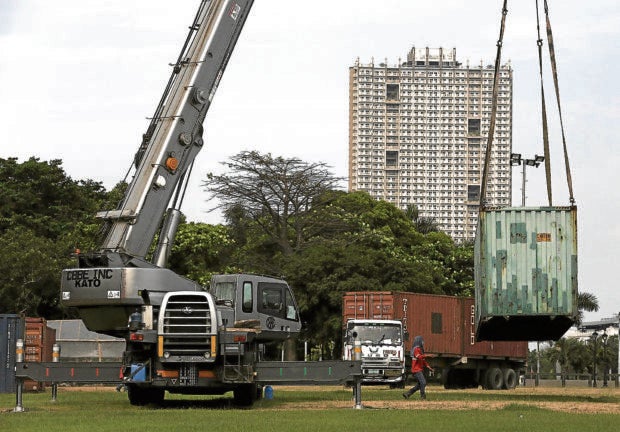 TEMPORARY HOSPITAL Workers lower container vans on the grounds of Rizal Park in Manila, where the city government is putting up a temporary mobile hospital to cope with the surge of COVID-19 cases. —RICHARD A. REYES

MANILA, Philippines — Highly infectious variants of SARS-CoV-2, the virus that causes COVID-19, were predominant among sample cases of the disease taken from around the country and recently analyzed by government health experts.

The Department of Health (DOH) also said that nearly half of the detected variant cases were in Metro Manila and the rest were in seven other regions.

Genetic studies showed that 642 out of 752 latest COVID-19 samples, or 80 percent, bore either the contagious B.1.1.7 or B.1.351 variants, which were first detected in the United Kingdom and South Africa, respectively, or the potentially contagious P.3 variant first found in the Philippines.

Forty-seven percent of the variant cases were in Metro Manila. The rest were in the Cordillera Administrative Region, Ilocos, Cagayan Valley, Calabarzon, Northern Mindanao, Soccsksargen and Caraga.

While the DOH confirmed last month that the UK and South Africa COVID-19 variants had been detected in all cities in Metro Manila, results of the latest genetic analysis showed that the so-called Philippine variant was now in the capital region.

The DOH has maintained that the P.3 variant is not yet a cause of concern due to insufficient data about its impact on public health.

The P.1 variant, first detected in Brazil, which is experiencing its worst health crisis, has so far been detected in two returning overseas Filipinos.

Most of them are local cases but there are some cases among Filipinos returning from abroad.

Among the variant cases, 12 have died, 521 recovered and 109 still actively battling the disease, according to the DOH.

Infectious disease experts also encouraged people to open or roll down windows at home, workplaces, or even in vehicles, while following the more common health measures like mask-wearing and physical distancing.

“We should step up on the ventilation system indoors and outdoors. This would need major engineering controls in workplaces,” said Dr. Tony Leachon, a former adviser to the task force overseeing the government’s pandemic response.

“The claim of the experts, if proven and accepted, could have massive implications on [the] counter-COVID-19 strategy across the world. This may require people to wear masks even inside their homes and possibly at all times,” Leachon said.

Dr. Edsel Salvana, who is part of the Department of Health Technical Advisory Group, said the government had already taken account of this for a while now and “we just have to do a better job with ventilation.”

In light of the new findings, infectious disease expert Dr. Rontgene Solante agreed that people should pay more attention to air circulation, especially in poorly ventilated and enclosed areas, although there is no more need to change the current health protocols.

“For me, it’s just a validation … that it is also transmitted airborne,” he said.

Solante said “airborne transmission is only possible in certain conditions and [still] not the major mode of [virus]transmission.”

On April 15, the medical journal The Lancet published “ten scientific reasons in support of airborne transmission,” contradicting predominant views that the virus spreads mainly through respiratory droplets at a short, one-meter distance.

The British medical journal The BMJ on April 14 also published an editorial calling for an improved air quality, as aerosol transmission had been getting “only a cursory mention in some infection control guidelines.”

In the report appearing in The Lancet, six health experts from the United States, the United Kingdom and Canada documented “long-range” transmission in superspreader events, or between individuals in adjacent rooms in quarantine hotels.

It detected “viable” SARS-CoV-2 in air samples from rooms occupied by an infected person; in air filters and building ducts in hospitals that “could be reached only by aerosols”; and during laboratory experiments that found the virus infectious in the air up to three hours.

The report said “a third and perhaps up to 59 percent of all transmissions globally” were traced to asymptomatic or presymptomatic patients, who were not coughing or sneezing. It said it was a “key way” for the virus to spread around the world.

“We propose that it is a scientific error to use lack of direct evidence of SARS-CoV-2 in some air samples to cast doubt on airborne transmission while overlooking the quality and strength of the overall evidence base,” it read.

“There is consistent, strong evidence that SARS-CoV-2 spreads by airborne transmission. Although other routes can contribute, we believe that the airborne route is likely to be dominant. The public health community should act accordingly and without further delay,” it added.

A record 72,607 new recoveries were listed based on the department’s time-based tagging, which considered mild and asymptomatic cases as recovered after 14-day quarantine. This brought total recoveries to 779,084.

It said 141,089 cases were still active, the highest in Southeast Asia.

Out of 34,546 tested on Saturday, 17.2 percent turned out positive for the virus. Seven laboratories, however, did not submit their data.