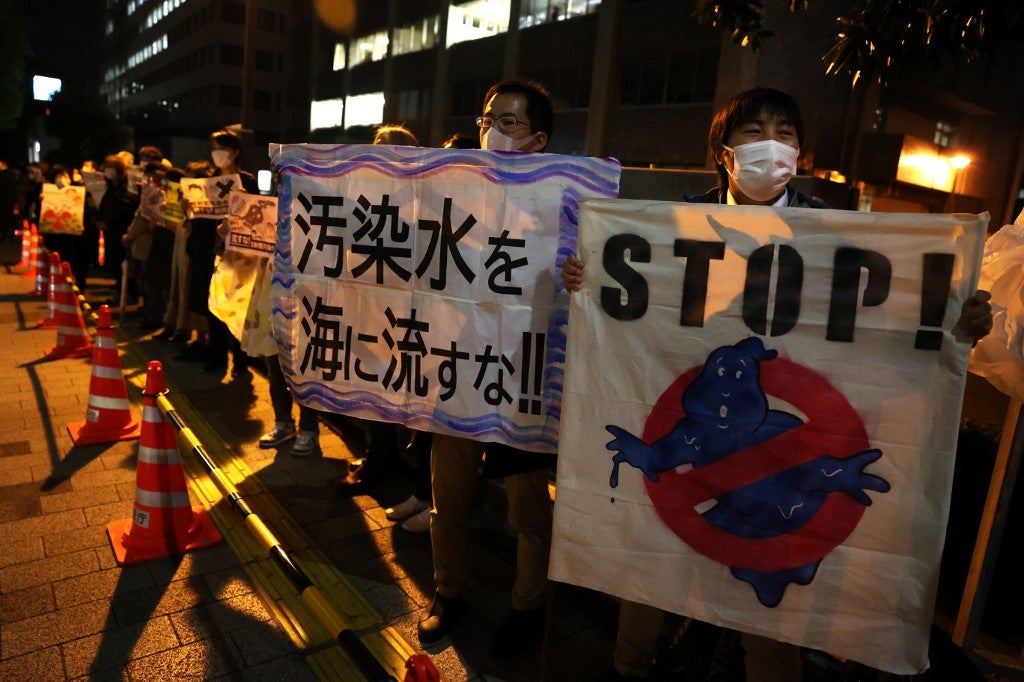 Protestors hold slogans as they take part in a rally against the Japanese government’s decision to release treated water from the stricken Fukushima Daiichi nuclear plant into the sea, outside of the prime minister’s office in Tokyo on April 13, 2021. (Photo by Yuki IWAMURA / AFP)

Kerry arrived in Seoul on Saturday to discuss international efforts to tackle global warming on a trip that included a stop in China ahead of President Joe Biden’s virtual summit with world leaders on climate change on April 22-23.

South Korean Foreign Minister Chung Eui-yong sought to rally support behind the country’s protest against the Fukushima plan at a dinner meeting with Kerry, the ministry said. Under the plan, more than 1 million tonnes of water will be discharged from the plant wrecked by an earthquake and tsunami in 2011 into the nearby sea off Japan’s east coast.

“Minister Chung conveyed our government and people’s serious concerns about Japan’s decision, and asked the U.S. side to take interest and cooperate so that Japan will provide information in a more transparent and speedy manner,” the ministry said in a statement.

But Kerry, at a media roundtable on Sunday, said Tokyo had made the decision in a transparent manner and will continue following due procedures.

“The United States is confident that the government of Japan is in very full consultations with the IAEA,” he said, referring to the International Atomic Energy Agency.

“The IAEA has set up a very rigorous process and I know that Japan has weighed all the options and the effects and they’ve been very transparent about the decision and the process.”

The former U.S. secretary of state added that Washington would closely monitor Japan’s implementation “like every country, to make certain there is no public health threat.”

The South Korean foreign ministry said Chung and Kerry also agreed to work together to boost international cooperation to achieve carbon neutrality by 2050, a goal pledged by South Korea, Europe and others.

Kerry told the roundtable that Biden aims to urge countries to commit to more ambitious greenhouse gas emissions targets, including China, such as by revamping their power initiatives or speeding up transitions to renewable energy.

The United States is expected to announce its own new emissions target for 2030 this week.

“I think Korea has set an ambitious target and Korea is trying to do a lot, it’s not easy for any country,” Kerry said. “We need to be smarter, so do I think it’s possible for additional steps? I do think there are some things that could happen.”