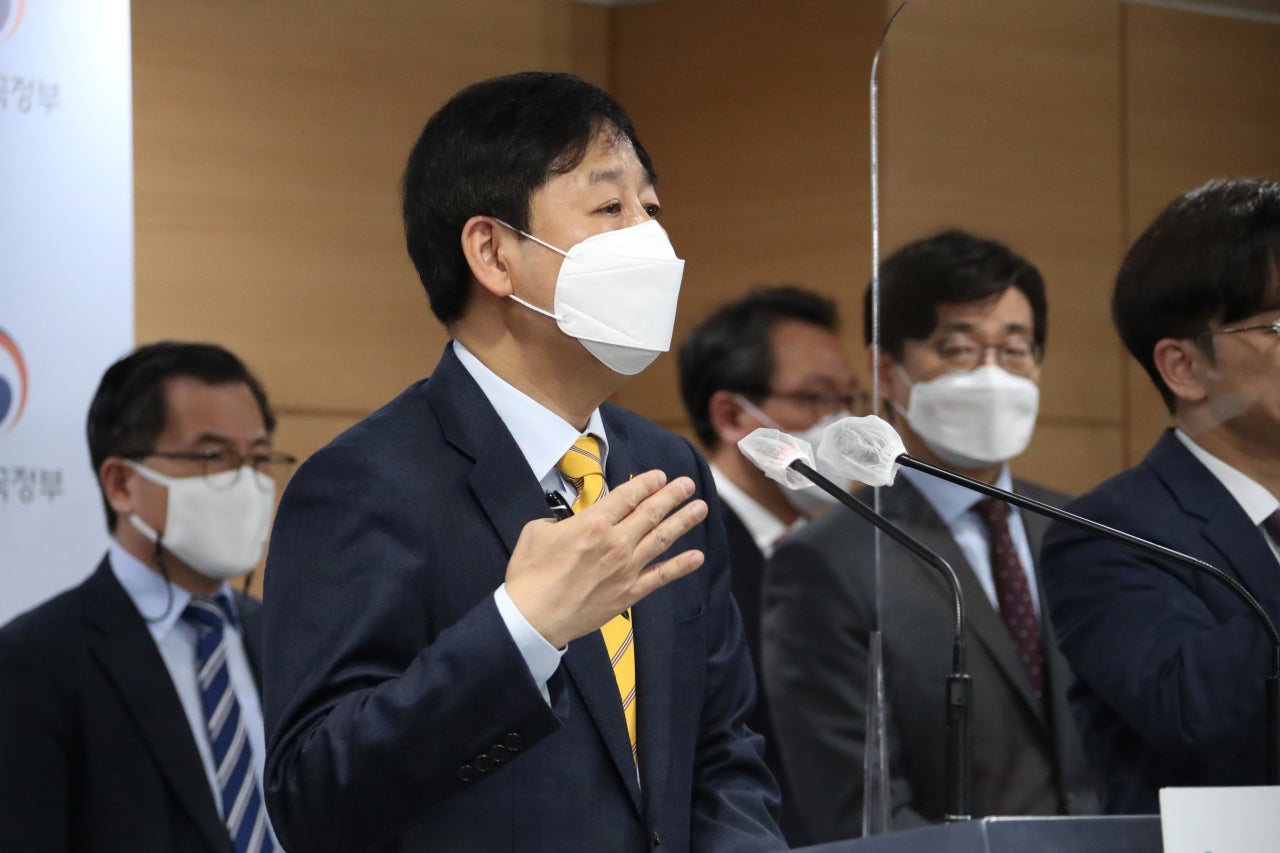 Koo Yoon-cheol, head of the Office for Government Policy Coordination, announces the South Korean government‘s official response to the Japanese government’s decision to release wastewater from the Fukushima nuclear station after finishing a vice ministerial meeting on the issue Tuesday. Japanese Prime Minister Yoshihide Suga announced hours earlier that Japan will start releasing wastewater from Fukushima in the next two years, as the move is “unavoidable in order to achieve Fukushima’s recovery.” (Yonhap)

The government expressed strong regret over the Japanese government’s “unilateral” choice to release the radioactive water, saying the decision was made without discussions or negotiations with Korea.

“This decision from the Japanese government is outright unacceptable,” said Koo Yoon-cheol, head of the Office for Government Policy Coordination, in a press briefing Tuesday.

“The National Assembly, civic groups, local government and councils are all against the decision, and fisheries workers, experts and public opinion within Japan have also been against the move.”

Hours earlier, Japanese Prime Minister Yoshihide Suga announced that Japan would start releasing wastewater from Fukushima in the next two years, saying the move was “unavoidable in order to achieve Fukushima’s recovery.”

A huge earthquake and tsunami in March 2011 ripped through northeastern Japan and caused the meltdown of three nuclear reactors at the Fukushima nuclear station. It was the world’s worst nuclear disaster since Chernobyl.

The Japanese government plans to dilute the contaminated water before releasing it so that some harmful substances can be reduced to allowable levels. The dilution process won’t remove tritium from the water but could reduce other radionuclides to safe levels, it said.

Releasing all of the contaminated water is expected to take decades once the process starts in 2023. Around 1.25 million tons of radioactive water has accumulated so far, and around 170 additional tons build up every day.

In response to the announcement, the Korean government held an emergency vice-ministerial meeting at the Seoul Government Complex to discuss the country’s response.

While briefing reporters on the results of the meeting, Koo said the government would officially deliver its concerns to the Japanese government and express Koreans’ opposition to the plan, adding that the government would take the necessary measures to keep Koreans from radioactive water from the Fukushima plant.

The Korean government is responding by referring to the United Nations Convention on the Law of the Sea, under which countries are obligated to refrain from inflicting environmental damage on neighboring countries and must share details on how to minimize the damage if they do.

Koo said the government had continuously pushed for cooperation within the international community while strengthening safety management for fisheries imports and radioactive water.

The government has also made official comments in discussions with the International Atomic Energy Agency and the World Trade Organization on the danger of radioactive water from the Fukushima plant, and on the need to demand transparency and thorough checks on how Japan plans to dispose of the contaminated water.

“We will continue to thoroughly monitor the influx of radioactive materials into our oceans in preparation of the release,” Koo added. “The government will also strengthen inspection of all fisheries imports, including those from Japan.”

Yet seeking international cooperation could be difficult for Korea, as the United States has expressed support for Japan’s decision on the Fukushima wastewater.

“The United States is aware that the GOJ examined several options related to the management of the treated water currently being stored onsite at the Fukushima Daiichi site,” the US Department of State said in a press release Tuesday, referring to the government of Japan.

“In this unique and challenging situation, Japan has weighed the options and effects, has been transparent about its decision, and appears to have adopted an approach in accordance with globally accepted nuclear safety standards.”

But environmental groups condemned the Japanese government’s decision, saying the country had effectively announced its plans to commit an act of terrorism by threatening the global marine environment and the livelihoods of neighboring countries and their people.

Greenpeace criticized the Japanese government for infringing on the human rights of those living in the Asia-Pacific region and inflicting “irrecoverable damage” on Korea and other nearby nations.

“Rather than using the best available technology to minimize radiation hazards by storing and processing the water over the long term, they have opted for the cheapest option, dumping the water into the Pacific Ocean,” said Kazue Suzuki, a climate and energy campaigner at Greenpeace Japan, in a press release Tuesday.

“The Cabinet’s decision failed to protect the environment and neglected the large-scale opposition and concerns of the local Fukushima residents, as well as the neighboring citizens around Japan.”

The United Nations had warned the Japanese government in June 2020 and again this past March to delay any decision on discharging the radioactive water into the sea until the COVID-19 pandemic is over and appropriate international discussions are held.

Local activist groups asked the Korean government to seriously consider its legal options in response to the “unjustified decision,” saying the process would harm the interests of Korea and its people.

“What Japan announced this morning is nothing less than an act of international terrorism,” said Im Sung-hee, a director with the local civic group Green Korea, in a phone interview with The Korea Herald.

“The South Korean government has repeatedly released statements and ‘expressed deep regrets,’ and that’s not enough. The government must be more active in seeking international cooperation and should review further legal options to prevent the crisis from happening two years from now.”