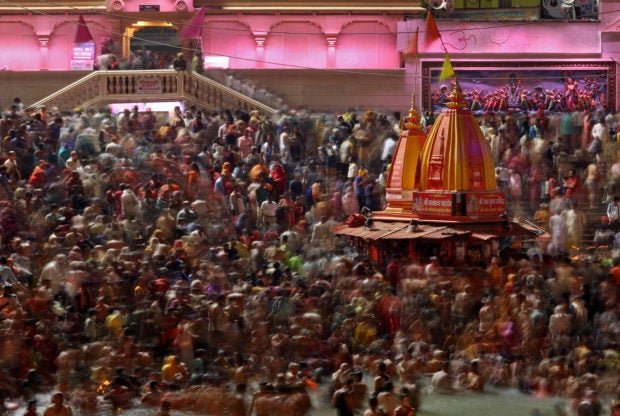 Hindu devotees take a holy dip in the Ganges river during Shahi Snan at “Kumbh Mela”, or the Pitcher Festival, amidst the spread of the coronavirus disease (COVID-19), in Haridwar, India, April 14, 2021. Picture taken with slow shutter speed. REUTERS/Anushree Fadnavis

NEW DELHI/BENGALURU  – India battled a record surge in COVID-19 cases on Friday as hospitals ran out of oxygen and beds, while politicians held election rallies and hundreds of thousands of Hindu devotees attended a weeks-long festival, infuriating health officials.

A massive second wave of infections, second only to the United States in total, forced authorities to restrict movement of people in Mumbai, New Delhi and other cities amid growing calls for faster vaccination rollouts.

The 217,353 new cases reported by the health ministry on Friday marked the eighth record daily increase in the last nine days and took the total number of cases to nearly 14.3 million.

The United States has reported more than 31 million infections.

Experts have raised concerns about the spread of more contagious variants of the disease, particularly given widespread participation in religious festivals and political rallies. A Lancet study this month estimated that daily deaths in India could double by June.

Hundreds of thousands of ascetics and devout Hindus were gathered along the banks of the Ganges in the northern state of Uttarakhand after a mass dip during a religious festival on Wednesday, hoping to wash away their sins. Hundreds have tested positive.

In the capital Delhi, cases hit a record 16,699 overnight.

“It appears that more younger people have severe illness,” said Giridhara Babu, an epidemiology professor at the Indian Institute of Public Health.

Health Minister Harsh Vardhan again blamed a “casual approach” for the unprecedented rise in cases, though his colleagues in Prime Minister Narendra Modi’s ruling party were still addressing election rallies attended by tens of thousands with little evidence of masks or social distancing.

Home Minister Amit Shah, whose department oversees lockdown and other COVID rules, held a roadshow on an open-top vehicle through a crowded street seeking votes in the state of West Bengal.

Thousands of farmers protesting in the capital against new agricultural laws for months have vowed to continue with their around-the-clock sit-ins.

“The speed with which the virus is spreading in our region (South Asia) is truly frightening,” said Udaya Regmi, of the International Federation of Red Cross and Red Crescent Societies.

The government said it would supply an estimated 17,000 tonnes of oxygen to a dozen states where the virus is surging, including western Maharashtra and Delhi.

Supplies of anti-viral drug Remdesivir are also being stepped up after reports of a widespread shortage.

India has so far injected 117 million vaccine doses, the highest globally after the United States and China, but that covers only a small fraction of its 1.35 billion people.

Vaccinations peaked at 4.5 million doses on April 5 but have since averaged about 3 million a day, according to government data, amid complaints about shortages from states.

India has shifted from being a mass vaccine exporter to an importer, having earlier rebuffed foreign drugmakers like Pfizer. It will import Russia’s Sputnik V vaccine starting this month to cover as many as 125 million people.

India on Thursday also gave approval to the Haffkine Institute in Maharashtra to begin producing homegrown Bharat Biotech’s COVAXIN shot, and said its production capacity would be raised to nearly 100 million doses by September.

The country is currently administering COVAXIN and AstraZeneca’s vaccine, which is manufactured by the Serum Institute of India and branded Covishield.