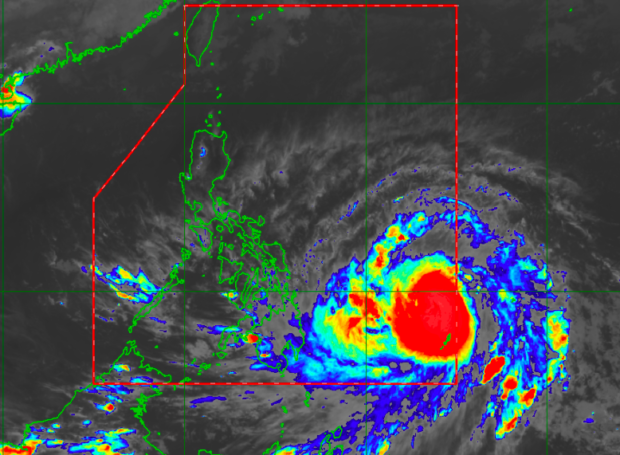 Bising is packing maximum sustained winds of 150 kilometers per hour (kph) near the center and gustiness of up to 180 kph — up from just 130 kph and 160 kph, respectively, on Friday afternoon.

Hence, Pagasa has decided to place the following areas under Signal No. 1. (Wind speed of 30 to 60 kph expected within the next 36 hours)

Moderate, heavy to at times intense rains are expected in Eastern Visayas and Camotes Islands, which Pagasa said may cause flashfloods and landslides in vulnerable areas.

Pagasa said that Bising is moving west northwest at 15 kph, and is forecast to move to within 380 kilometers east of Guiuan, Eastern Samar by Saturday evening.

After 24 hours or by Sunday evening, it would be around 335 kilometers east of Legazpi City in Albay.

Instead of recurving back to the Pacific Ocean, however, Pagasa is now expecting Bising to move north or northeast, over the eastern portion of the Philippine Sea.

On Monday evening, Pagasa said the weather disturbance would be around 285 kilometers northeast of Virac, Catanduanes, or 545 kilometers east of Infanta, Quezon.

Pagasa said Bising is not likely to make landfall, but the northeastern parts of the Bicol region, and even Cordillera Administrative Region and Cagayan Valley are inside the cone of uncertainty — an indicator that there is a chance for Bising to hit these areas.

Likewise, the state weather bureau said that raising TCWS No. 2 remains a possibility especially as Bising’s diameter appears wide, which means that the trough can inflict damage even if the typhoon does not make landfall.