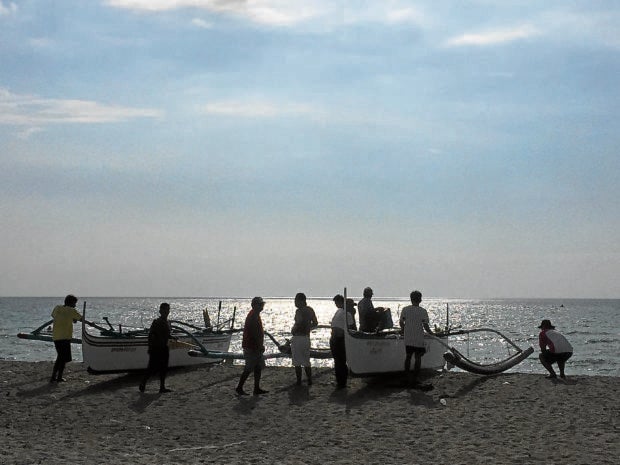 DISTURBING PRESENCE  – Fishermen from San Miguel in San Antonio town are catching fewer and fewer squid for which their village is well-known and they blame the presence of at least 20 Chinese ships in waters off Zambales for this. Defense Secretary Delfin Lorenzana says he will check this new report of a large number of Chinese ships in another part of the country’s exclusive economic zone.

SAN ANTONIO, Zambales—Fishermen on Friday said at least 20 Chinese vessels have been anchored about 111 kilometers off San Antonio town in Zambales province since January and they blamed the mysterious nocturnal activities of the ships for their dwindling catch.

“When we’re fishing at night, we could hear a loud sound underneath the waters near the area where these foreign ships are staying. They are disturbing our fishing ground,” said Jefrey Melchor, one of the fishermen who complained about the diminishing amount of fish and squid they were able to haul in daily.

He said the local fishermen could not tell what the ships were doing because they could only see flashing lights from these vessels at night.

Melchor said they used a GPS (global positioning system) device to determine the location of the Chinese ships.

Joemari Larawan, 49, another fisherman, said they could make out Chinese markings on the vessels from a distance.

“We could no longer catch fish in areas around these ships. It’s going to be a lean season while these ships are here,” Larawan said.

Nathaniel Gamis, commander of the Philippine Coast Guard (PCG) substation in San Antonio, said they could not make the vessels leave because these are situated on the so-called international nautical highway.

“It’s normal for these foreign ships to pass through this area,” Gamis said. But the fishermen said the vessels were stationary and had been lingering there for four months now.

“Many of my fellow fishermen have been complaining about returning home almost empty-handed after venturing out to sea,” Melchor told the Inquirer by phone on Friday.

“We used to get large hauls of fish and squid before these vessels arrived here. We could earn P4,000 on each fishing trip. But now we’re getting almost nothing,” Melchor said.

Squids are especially abundant during summer, and a fisherman could bring home at least 20 kilograms of squid every day between February and May, villagers here said.

The Chinese vessels are moored within the country’s 370-kilometer exclusive economic zone (EEZ) where the Philippines has the sole and sovereign right to fish and exploit the marine resources.

Asked for comment, Defense Secretary Delfin Lorenzana said he would check the situation with the National Task Force for the West Philippine Sea (NTF-WPS).

The waters off Zambales are north of the Kalayaan Island Group where 240 Chinese maritime militia vessels have been moored since early March.

Manila protested the presence of the ships and demanded that China withdraw all its vessels from the West Philippine Sea, waters within the country’s EEZ.

Rear Adm. Ramil Roberto Enriquez, the commander of the military’s Western Command based in Palawan province, admitted it did not have enough planes and ships for sustained patrolling of the West Philippine Sea.

It cited a report by the NTF-WPS that as much as 240,000 kilos of fish were being illegally taken from Philippine waters each day that the 240 Chinese vessels remain at the Kalayaan area.

Villardo Abueme, Hero president, said the country could face a fish shortage because of the Chinese encroachment on the country’s EEZ.

“The Chinese fishermen have been overfishing, depleting our marine resources. They even sell their catch to our fishermen at higher price,” Abueme said in a statement on Thursday.

Fishermen from other towns in Zambales have also stopped fishing at Panatag (Scarborough) Shoal (also known as Bajo de Masinloc), due to the depletion of the fish population in what was once a traditional Filipino fishing ground.

The Chinese Coast Guard had used water canons and sometimes rammed the boats of Filipino fishermen to drive them away from the shoal.

China, which claims nearly all of the South China Sea, seized control of Panatag in 2012, prompting the Philippines to seek UN arbitration. In 2016, the arbitral tribunal invalidated China’s sweeping claims, but Beijing continues to ignore the ruling.

“This is actually worse than invasion,” Abueme said. “Our fishermen have nothing left to eat. They will starve because of these Chinese vessels.”He called on the Bureau of Fisheries and Aquatic Resources (BFAR) to investigate China’s overfishing in the West Philippine Sea.

Willy Cruz, Central Luzon BFAR director, told the Inquirer in a phone interview that he has yet to receive an official report on the presence of the ships in the waters off San Antonio.

“We, of course, are condemning the presence of any foreign entity in our waters,” he said.

Once the BFAR confirms that foreign ships are disrupting the country’s fishing grounds, it could report to the PCG and urge the filing of a diplomatic protest through the Department of Foreign Affairs, Cruz said.

—WITH REPORTS FROM DEXTER CABALZA AND KARL R. OCAMPO INQ