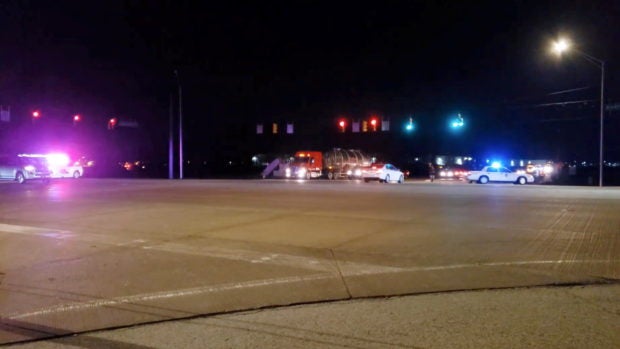 Police is seen at a street following a shooting incident at a FedEx facility in Indianapolis, Indiana, U.S. April 16, 2021, in this still image taken from a video. Kevin Powell/Indy First Alert/via REUTERS

The 19-year-old gunman who opened fire at a FedEx site in Indianapolis, killing eight workers before taking his own life, was a former employee of the facility, but his motive for the rampage remained unknown, police said on Friday.

The incident – the latest in a spate of at least seven deadly mass shootings in the United States over the past month – unfolded at a FedEx operations center near Indianapolis International Airport in Indiana after 11 p.m. local time on Thursday night, police said.

It lasted only a couple of minutes and was already over by the time police responded to the scene, Craig McCartt, the Indianapolis police department’s deputy chief, told a news briefing on Friday.

Witnesses described a chaotic attack, as the gunman opened fire in the parking lot before entering the facility and continuing to shoot, leaving victims both inside and outside the building. Officers found the suspect dead of an apparent self-inflicted gunshot wound.

A FedEx spokeswoman and police confirmed on Friday that the suspect, identified by authorities as Brandon Hole, was a former employee at the facility. Craig McCartt, deputy chief of the Indianapolis Metropolitan Police Department, told reporters at a news briefing that the suspect was believed to have last worked at the plant in the fall of 2020.

Asked what brought him back to the facility on Thursday night, McCartt replied: “I wish I could answer that.”

FBI Indianapolis Special Agent in Charge Paul Keenan said it would be “premature to speculate” on the gunman’s motive.

The massacre is the most recent in a series of U.S. mass shootings that has again pushed the issue of gun violence to the political foreground.

Indianapolis – the capital of the Midwestern state of Indiana – alone has seen two mass shootings this year. In January, police say a teenager shot and killed four family members and a pregnant woman.