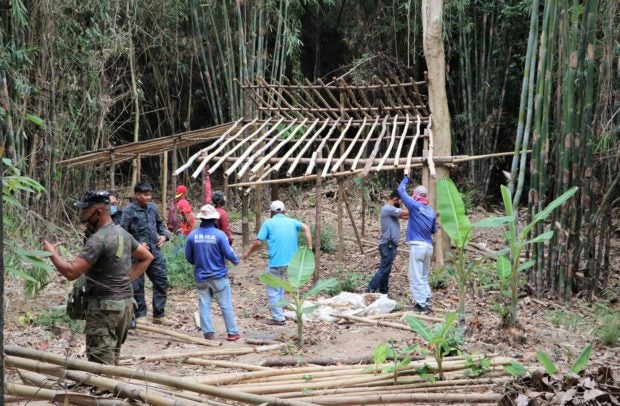 A demolition team from the Subic Bay Metropolitan Authority (SBMA) tears down some of the structures built by illegal settlers at Lot 2 near Mt. Sta. Rita in the Subic Bay Freeport. PHOTO FROM SBMA

SUBIC BAY FREEPORT—Some farmers and Aeta tribesmen were asked to stop encroaching on government-administered land and clearing forests to build illegal settlements inside this free port.

In a statement on Friday (April 16) Subic Bay Metropolitan Authority (SBMA) Administrator Wilma Eisma said the intrusion and illegal settlements violate the law and an agreement between the agency and the Aeta tribe on the use and disposition of ancestral lands here.

“Your efforts in clearing land and building shacks will simply be wasted if you’re activities are illegal. The authorities will simply dismantle what you build,” Eisma said.

“There has long been an agreement on the ancestral domain here in the Subic Freeport, and we hope you would honor it to avoid any problem,” she said.

Eisma said the agency could sue the illegal settlers “to protect government interest over the properties.”

Two new illegal settlements were discovered at the Tipo area of the freeport near the Mt. Sta. Rita Naval Link Station and the Subic Bay Expressway (SFEx), Eisma said.

Tipo, which is the location of the eight-kilometer SFEx and some industrial park projects, is a village in the town of Hermosa, Bataan province and adjoins Dinalupihan town and the village of Cabalan in Olongapo City.

Eisma cited a report from the SBMA Ecology Center that showed an undeveloped settlement near the SFEx tunnel with huts built on a newly-cleared 500-square meter area.

Dela Llana said the illegal clearing was carried out by a group of tribesmen from the Iram Resettlement area in Olongapo City.

Eisma said the SBMA demolished these structures on Tuesday (April 13) with the help of the SBMA Legal Department and the SBMA Law Enforcement Department.

She said the SBMA also served a notice to vacate to farmers who have started a new settlement at Lot 2 near Mt. Sta. Rita. The notice was received on Monday (April 12) by Wilson Villas, vice chair of the group Filipino Farmers Center Internazionale (FFCI).

Eisma said that while the Lot 2 settlement was still uninhabited, some semi-concrete structures put up by the illegal settlers there point to an intent for permanent occupancy.

The SBMA chief pointed out that the SBMA has already filed in court a case against illegal settlers consisting of about 30 families affiliated with FFCI who have occupied Lot 12, an area on the boundary of the Subic Freeport and the Roosevelt National Park in Dinalupihan town, Bataan province.

She said the SBMA gave the FFCI five days to remove their belongings at Lot 2 and leave the area.