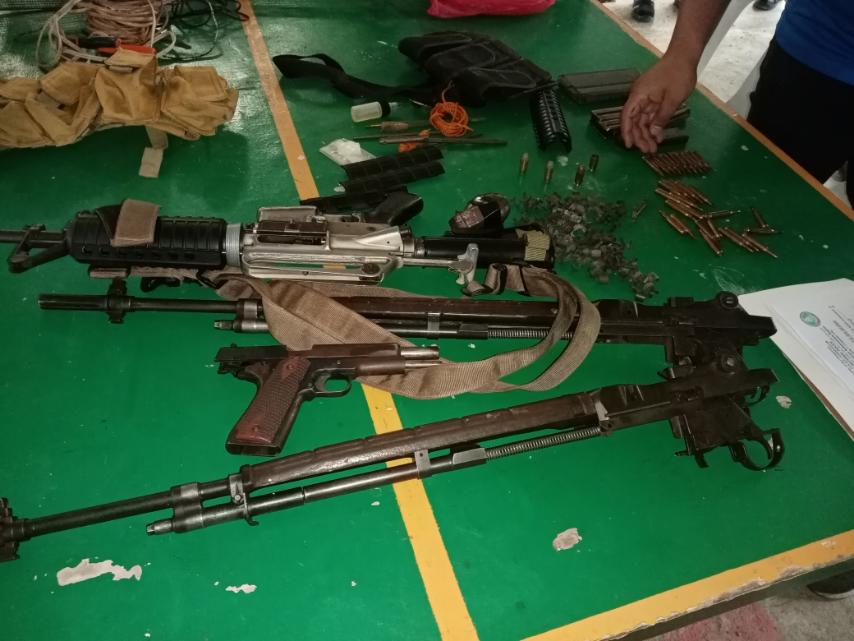 Police present some of the firearms seized from the house of Marcos Manunggal, former chief of Tee village in Datu Salibo, Maguindanao, who allegedly headed an armed group allied with local terrorists before he was slain in a law enforcement operation on Wednesday (April 14). PHOTO FROM CIDG MAGUINDANAO

COTABATO CITY—A former village chief of Datu Salibo town, Maguindanao province, who allegedly turned into a crime gang leader, was killed and four of his followers were arrested in a police operation on Wednesday (April 14).

Manunggal allegedly heads an armed crime group with at least 20 followers operating in the towns of Datu Salibo, Shariff Aguak and Mamasapano towns.

Operatives of the CIDG, Maguindanao police, the Army’s 6th Infantry Battalion and Philippine Drug Enforcement Agency were to serve search warrants on Manunggal and two other suspects—Datumanot Manunggal and Jaybee Mastura—past 3 a.m. when they were met by gunfire from Manunggal and his men.

According to Madin, Datumanot Manunggal and Jaybee Mastura managed to escape.

Mastura is allegedly one of the BIFF’s bomb makers.

Seized from Manunggal’s home were an M-16 rifle, a Browning automatic rifle, a shotgun, a .45 caliber pistol, gun parts and ammunition.

The arrested suspects are now detained at the CIDG office in Cotabato City.