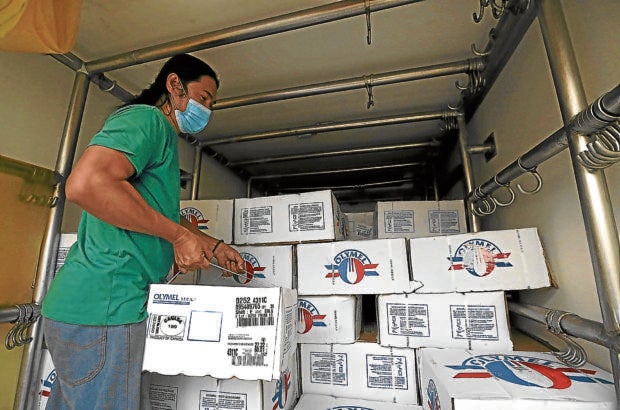 FROZEN MEAT An employee of a meat dealer in Tondo, Manila, readies pork cuts from Canada for delivery. —LYN RILLON

MANILA, Philippines — Three senators are pushing for the passage of a joint resolution of Congress that seeks to revoke Executive Order (EO) No. 128 ,which reduces the tariff on pork importation and increases the cap on pork imports by 650 percent.

Senate Minority Leader Franklin Drilon said EO 128 might be assailed because it was issued by President Rodrigo Duterte while Congress was on break.

“By law, the authority of the President to fix tariff rates while Congress is not in session can be withdrawn or revoked by virtue of a joint resolution,” he added.

Drilon said he would file a joint resolution with Senators Cynthia Villar and Francis Pangilinan for the EO’s revocation amid an ongoing Senate investigation of allegations of corruption in the importation of pork and other agricultural products.

Senators were not convinced that the Department of Agriculture had sufficient basis for recommending to the President a hike in the minimum access volume (MAV) for imported pork for one year, supposedly to augment the country’s dwindling hog meat supply.

Drilon, a former justice secretary, said Republic Act No. 10863, or the Customs Modernization and Tariff Act—the basis for EO 128—allows the President to increase, reduce or remove existing rates of import duty “while Congress is not in session.”

But the law also says that the power to modify tariff rates “may be withdrawn or terminated by Congress through a joint resolution.”

Drilon echoed other senators’ sentiments that EO 128, not the African swine fever outbreak, would kill the local hog industry.

“The irrational and drastic decision to increase the MAV serves as a final ‘nail in the coffin …,’” he said.

Sen. Panfilo Lacson earlier expressed his suspicions over Malacañang’s move to submit EO 128 while Congress was on recess.

“Did the President even attempt to call for a special session of Congress so we can act on this recommendation increase or adjust the MAV? Isn’t it suspicious that the recommendation was submitted to the Senate on March 26, the last session day before the Lenten break, and there will be no session until May 16?” he asked during a Senate hearing on Monday.

Lacson doubted presidential spokesperson Harry Roque’s suggestion that the President might listen to the senators if they lodge a unified appeal.

“Unfortunately, that’s Secretary Roque speaking, not the President himself. His (Mr. Duterte’s) track record in giving importance to the collective sense of the Senate speaks for itself,” Lacson said.

He was referring to the twin resolutions passed by the Senate and submitted to Malacañang, which called on the President to declare a state of national emergency over the swine fever outbreak, and to reconsider the proposal to increase the MAV and lower the import tariffs.

“… He did not only ignore them; he didn’t even take the time to discuss the issues with at least the senior officials of the Senate,” Lacson said.

He expressed hope that Mr. Duterte would “consider the plight of the dying backyard hog raisers and the foregone revenues that the government [would] deal with, especially at this time of the pandemic.”