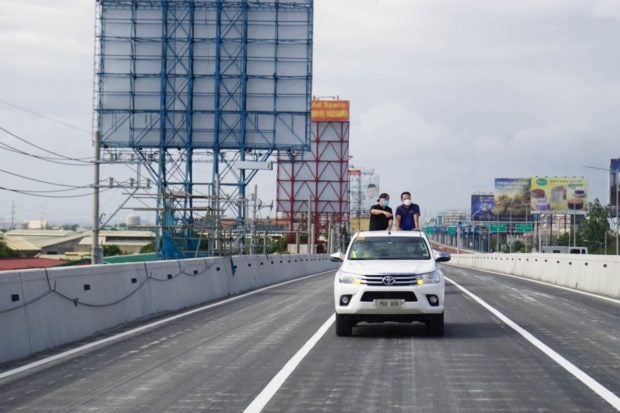 San Miguel Corporation (SMC) president and COO Ramon S. Ang and Department of Public Works and Highways (DPWH) Secretary Mark Villar conduct a final inspection of the four-kilometer Skyway Extension northbound project from Susana Heights to Sucat before its opening to the public on Sunday, April 11, 2021. The opening of the initial two lanes of the Skyway Extension northbound allows motorists from Laguna, Cavite, and Batangas to bypass the Alabang viaduct to directly access the Skyway System, reduce congestion along EDSA, and significantly reduce travel times. Photo from SMC Media Affairs

MANILA, Philippines — San Miguel Corp. (SMC) has opened two of three lanes of the Skyway Extension’s northbound section and announced that access on this road is free until further notice.

This section of the Skyway Extension can be used by Class 1 vehicles with RFID, he added.

“I am proud to announce to motorists from the south that finally, our long-awaited Skyway Extension northbound section is finally open. Our long-term solution to addressing traffic particularly on SLEX heading to the Alabang area has finally been realized,” he said in a statement.

The Skyway Extension’s northbound section will allow an additional capacity of 4,500 vehicles per hour and is seen to expedite travel time to the North Luzon Expressway (NLEX) to 25 to 30 minutes from the usual two to three hours, according to Ang.

“I’d like to thank too, the local government of Muntinlupa and our private sector stakeholders, without whom we could not have gotten this done. Most of all, thank you to our motorists, for bearing with us. We are excited for you to finally be able to feel the benefits of this new project,” he said.

For his part, Public Works and Highways Secretary Mark Villar said that they are confident that by 2022, Duterte’s promise of decongesting EDSA will “come into fruition” with the help of this SMC project.

Villar also said the completion of the Skyway Extension’s northbound section is a testament to what the government and the private sector can achieve together.