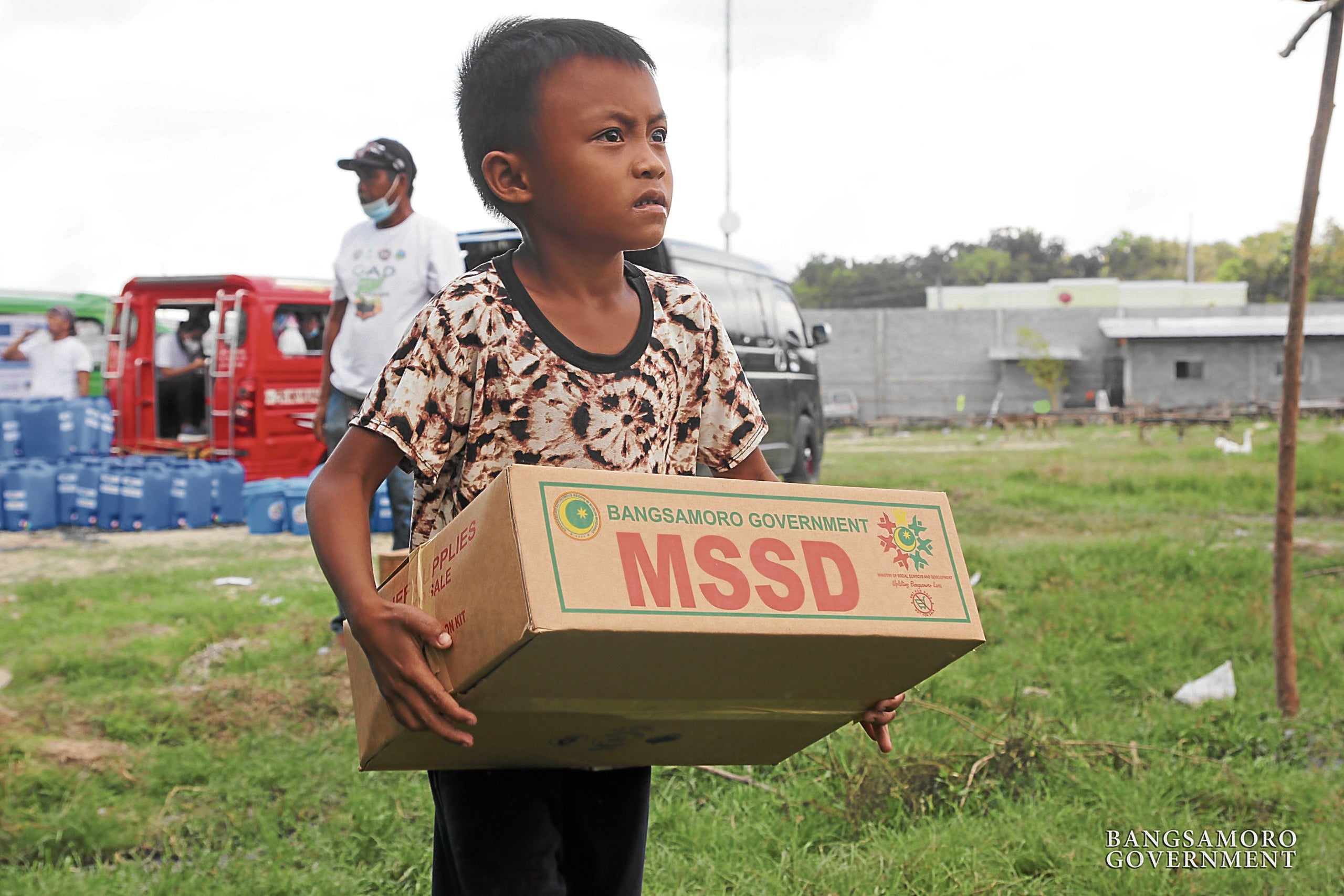 ASSISTANCE Evacuees from Datu Saudi Ampatuan town in Maguindanao receive food and other assistance from the Ministry of Social Services and Development of the Bangsamoro Autonomous Region in Muslim Mindanao. Thousands in five Maguindanao towns have been displaced by clashes between government forces and Islamic State-linked gunmen. —FAISAL CAMSA/BANGSAMORO INFORMATION OFFICE

COTABATO CITY—Four local governments in Maguindanao have declared their respective towns under a state of calamity after clashes between government troops and an Islamic State-linked group and a clan war displaced thousands of residents.

The Datu Saudi Ampatuan resolution authorized the use of the local government’s Quick Response Fund amounting to P483,000 for 2021 for relief aid to displaced families.

The Bangsamoro regional government is also assisting the evacuees in their daily needs.Armed skirmishes erupted on March 18 between government forces and gunmen belonging to the Bangsamoro Islamic Freedom Fighters (BIFF) in Barangay Kitango, Datu Saudi Ampatuan.

The BIFF gunmen were said to have planned an attack on the outpost of the Joint Peace and Security Team (JPST), which is composed of contingents from the Moro Islamic Liberation Front, Armed Forces of the Philippines and Philippine National Police. The JPST is tasked with maintaining peace and order in former rebel strongholds.

Prior to the March 18 clashes, residents of Kitango and its nearby villages had started fleeing their homes after sensing the presence of BIFF gunmen.

According to a March 30 situationer of the United Nations World Food Programme (WFP), the March 18 clashes and succeeding firefights have displaced 66,019 people (13,570 families) who are currently staying in 55 evacuation camps across 10 towns.

The International Organization for Migration (IOM) said around $2 million was required to respond to the evacuees’ most urgent needs.

“This displacement exacerbates already vulnerable and conflict-affected communities in the BARMM (Bangsamoro Autonomous Region in Muslim Mindanao). Our heart is with all these families during this extremely challenging time,” said Kristin Dadey, the IOM chief of mission in the Philippines.

WFP said it would “bolster the movement of food and nonfood items from the (government’s emergency operation center) to evacuation camps.”

The United Nations Department for Safety and Security expects prolonged fighting and further displacements given the scale of the military operation, the WFP situationer said.

Lt. Col. John Paul Baldomar, 6th Infantry Division spokesperson, said the clashes in Talitay on March 22 stemmed from a clan war and displaced some 700 families, or 3,500 people, from the villages of Pageda and Gadingan.

Baldomar identified the warring clans as followers of Mayor Sabal and the Watamama-Amiril families.

On Wednesday, Baldomar told the Inquirer it was already safe for evacuees to return as their villages had been cleared of BIFF presence by the military.

“Residents can now go home but it will be the call of local officials,” he said. —WITH A REPORT FROM JEOFFREY MAITEM