The peacemakers: Like a phoenix rising from the ashes | Inquirer News
Close
menu
search

The peacemakers: Like a phoenix rising from the ashes 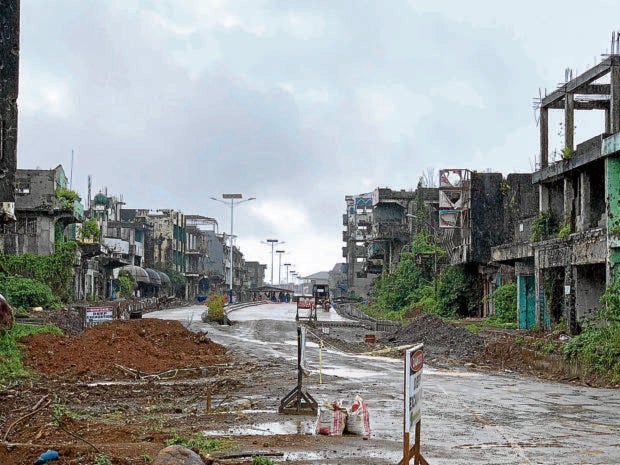 STILL REBUILDING According to a survey by Task Force Bangon Marawi, at least 232,221 people from 49,785 households were displaced by the fighting from May to October 2017. Residents of 72 barangays outside ground zero—or 130,476 people in 28,280 households—have since returned. Of the 18 major projects related to the rehabilitation of the Islamic city, 13 are now 70- to 100-percent complete. —PHOTO CONTRIBUTED BY RIZ SUNIO

MARAWI CITY, Lanao del Sur, Philippines — Driving around “ground zero” three-and-a-half years after the siege of Marawi, Farida Mangcaan felt both sad at seeing houses of friends and relatives still in ruins and hopeful at signs of a modern city rising from the rubble.

What was once a narrow, traffic-choked Banggolo bridge had been widened in the government’s drive to rebuild the Philippines’ largest Islamic city that was destroyed in five months of fighting in 2017.

Roads and sewerage systems in the flood-prone city center had been expanded.

Traffic lights had even been installed in major intersections.

“It’s like a dream,” said Mangcaan, a project coordinator of the humanitarian agency Community and Family Services International (CFSI), one of a number of nongovernment organizations involved in caring for the displaced.

Still, there was a tinge of loneliness driving past the devastated house she had lived in for five years, and those of her family and friends who could not go home anytime soon.

On May 23, 2017, government forces attempted to arrest a leader of the Islamic State of Iraq and Syria (Isis) that was seeking to establish a caliphate in the Philippines, sparking a major battle with local Isis groups—the Abu Sayyaf and the Maute — that reduced central Marawi to ashes.

Assistant Secretary Felix J. Castro Jr., manager of Task Force Bangon Marawi, has expressed optimism he would be able to complete Marawi’s rehabilitation during the term of President Duterte.

“We set December 2021 as our target date of completion to have room for unforeseen circumstances,” Castro said.

Of 18 major projects, 13 were 70- to 100-percent complete, including the 18.97-kilometer stretch of the transcentral roads, the Maul Lumbaca Ingud-Ranaranao road, two Agus bridges, a four-story school building, the school of living tradition, the Kurmatan bridge, and the two-lane Pantar-Marawi city road, barangay complexes with madrassah and health center, the peace memorial park, and museum.

The Grand Mosque is undergoing repair, along with five other mosques. The task force is building a new Dansalan Bato Mosque, and possibly three more to be financed by private donors.

Funds for the rehabilitation were released yearly, totaling P22.3 billion from 2017 to 2020; P5 billion was programmed this year.

“The contractors were instructed to work double time, make up for lost work due to Covid-19 and the bad weather,” Castro said.

“The rehabilitation of Marawi is not designed for the city to become a replica of Dubai,” he said. “It will highlight and restore institutions of the old Marawi while building better, modern infrastructures and facilities.”

A task force survey showed that the battle had displaced at least 232,221 people in 49,785 households.

Residents of 72 barangays outside ground zero—130,476 individuals in 28,280 households—were able to return months after the fighting ended, Castro said in an email.

He said all evacuation centers had been closed and 3,805 families who used to live in the “most affected area,” or MAA, comprising 24 barangays, had been moved to transitory shelters.

A total of 113 families have returned to their houses inside the MAA. “Many have applied for permit to rebuild or repair their house. Some can no longer return because they lived in no-build zones, like on the banks of the Agus river, and those who occupied the reclaimed areas near Lake Lanao. The government is building 4,000 permanent houses for them,” he said.

Property disputes will be submitted to a land dispute arbitration council, to avoid what otherwise could turn into a “rido,” or feuding between families and clans that often leads to bloodletting.

Fatana Monib Sarip, 33, a community volunteer worker, is among those who wish to return to ground zero. But ownership problems have prevented him from going back to four houses his family owned.

“If there is that chance to go back, I will wait for it,” he said.

Sarip and his two children are staying at the Lake View Transitory Shelter at Boganga, occupied by 772 families.

“There is nothing like home,” said Faida Abbas Indul, 65, a widowed mother of seven also staying at Boganga. The former high school principal could not go back to her damaged house at the edge of the lake in the no-build zone.

Indul received P73,000 in recovery assistance from the government and used it to turn a part of her cramped space into a “sari-sari” store. UN Habitat is building a house in a nearby barangay for her and 48 of her neighbors in the no-build zone.

But she has no immediate plans of relocating after the harrowing experience in the past three years of moving from one evacuation center to another that, at one time, led her to Cebu City to peddle fried bananas on the street.

Indul is also getting food rations from the CFSI’s Marawi Recovery Project, which is backed by a P220-million grant from Australia’s Department of Foreign Affairs and Trade (DFAT).

Mangcaan said 6,169 households had received livelihood assistance under the program. Some 30,000 displaced were assisted in securing lost birth certificates and other documents required to have access to education, health and government services.

Last month, the CFSI secured an additional P110-million grant from the DFAT for a Covid-19 recovery project to complement livelihood initiatives for the displaced.

Mangcaan was amazed at the pace of rebuilding during a visit to the area on a rainy Friday afternoon last week, her first since go-and-see visits were organized two years ago.

“What I saw was contrary to what people say. The people of Lanao del Sur and the Maranao community should know that there is progress at ground zero, and the future looks bright,” she said.

Editor’s Note: Fernando del Mundo was a Pulitzer Prize nominee and was cited for excellence in international reporting by the Overseas Press Club of America. As a reporter and humanitarian worker, he has covered conflict zones in Africa, Asia, the Balkans, and the Middle East.