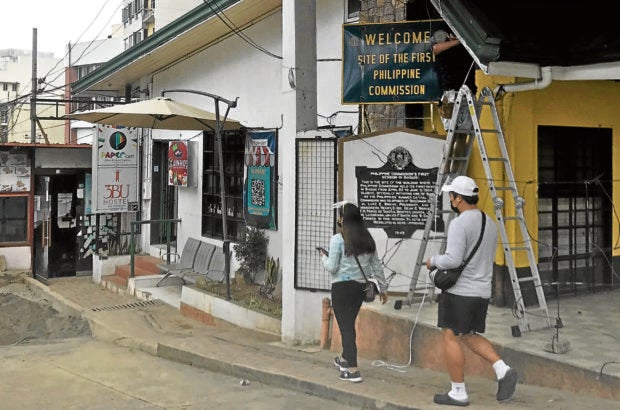 HISTORIC SESSION The marker honoring the first session of the Philippine Commission during the American colonial era is now surrounded by food stalls near Baguio City’s bus terminals. The city council wants the marker to be improved and properly managed. —VINCENT CABREZA

BAGUIO CITY, Benguet, Philippines — The marker recognizing the historic significance of Session Road here will be improved after being relegated for decades at a corner surrounded by food stalls near the city’s bus terminals.

The most traversed road in Baguio once hosted a building “where the Second Philippine Commission (under the American colonial government) held its first session from April 22 to June 11, 1904,” according to the marker’s inscription.

The marker is a testament to the first time Baguio became an official venue for the country’s American colonial government’s official proceedings. The city was designed and built by the Americans to serve as the seat of government during summer.

The Commission, also known as the Taft Commission that was named after William Howard Taft, the first civilian governor of the Philippines, organized the country’s government, its judiciary and its body of laws.

Session Road continues to serve as the main route through Baguio’s commercial center.

Each day almost every vehicle drives through its 1.7-kilometer stretch, prompting longtime residents to advocate for its conversion into a pedestrian mall.

But the Session Road marker, installed in 1940, has been wedged between small buildings at a spot near the intersection of Session Road and Governor Pack Road.

A city council resolution, which is scheduled to be passed next week, requires government workers to improve the marker’s surroundings according to prescriptions set by the National Historical Commission of the Philippines, Councilor Vladimir Cayabas told the Inquirer on Wednesday.

The Boy Scouts of the Philippines, which administers some of the marker’s neighboring buildings and property, has been cooperating, said Cayabas, who chairs the council committee on education, culture, creativity and historical research.

Some of these buildings have been torn down by the city government last year, citing issues related to safety, sanitation and road encroachment.

Due to the initial lockdown caused by the pandemic, the food stalls surrounding the Session Road marker had been removed.

The marker may need additional space and must not be obstructed by dangling wires, Cayabas said.

When required, the committee will file resolutions protecting other historical markers and heritage sites in the city, he added.

Also recognized for their historic relevance are the City Hall; Baguio’s oldest hotel, Casa Vallejo; the Teachers’ Camp, where the country’s first public school teachers were trained; Fort del Pilar, which hosts the Philippine Military Academy; and the presidential Mansion, the Philippine president’s official residence in the city.

These historic structures are featured in an electronic map drawn up by the Baguio Heritage Mapping Project. —VINCENT CABREZA