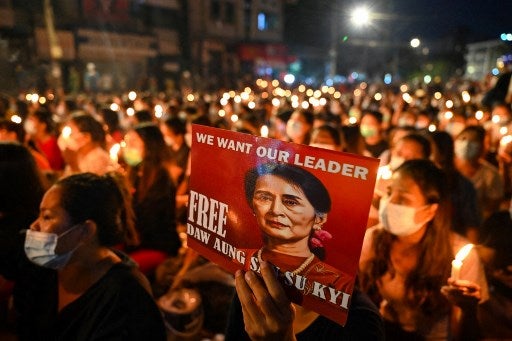 A protester holds a poster with an image of detained civilian leader Aung San Suu Kyi during a candlelight vigil to honor those who have died during demonstrations against the military coup in Yangon on March 13, 2021. (Photo by STR / AFP)

More than 535 people have died in daily demonstrations since the military overthrew Suu Kyi on February 1, halting Myanmar’s decade-old experiment in democracy.

The UN Security Council held an urgent closed-door session on the escalating crisis on Wednesday, and special envoy Christine Schraner Burgener urged them to act.

“I appeal to this Council to consider all available tools to take collective action and do what is right, what the people of Myanmar deserve and prevent a multi-dimensional catastrophe,” she said, in remarks obtained by AFP.

She said she remained open for dialogue with the junta but added: “If we wait only for when they are ready to talk, the ground situation will only worsen. A bloodbath is imminent.”

The emergency UN session came on the eve of Suu Kyi’s latest court hearing — she faces a raft of criminal charges that could see her barred from office for life.

Her legal team on Wednesday held their first meeting with her — by video link in a police station — since she was ousted and detained in the early hours of February 1.

The 75-year-old has not been seen in public, but her lawyers said she appeared to be in good health despite two months in detention.

The hearing on Thursday is expected to be brief, and to deal only with administrative aspects of the case.

The junta is also probing the Nobel laureate over allegations she took payments of gold and more than $1 million in cash, but Khin Maung Zaw, one of her lawyers, said these were not likely to translate into formal charges at this stage.

A group of ousted MPs from Suu Kyi’s National League for Democracy (NLD), who have been working underground against the junta, have announced plans for “a new civilian government” in the first week of April, without giving further details.

They announced that Myanmar’s military-drafted 2008 Constitution was “canceled”, and on Thursday a group of protesters burned a pile of copies in the street in Yangon.

The coup and the junta’s subsequent actions have triggered international condemnation and even sanctions.

Britain — Myanmar’s former colonial ruler — called for the emergency Security Council meeting after the military dramatically ramped up its use of lethal force against protesters over the weekend.

Britain’s UN envoy Barbara Woodward, said the Security Council was “united in its condemnation” and was discussing “a range of measures at our disposal.”

But China, considered an important ally of Myanmar, ruled out sanctions or other “coercive measures.”

China’s UN ambassador Zhang Jun also called for the protection of foreign businesses — a key concern for China, which has seen dozens of its factories torched amid anger against Beijing.

The US State Department has ordered the departure of non-essential diplomatic staff and their families from Myanmar, and Japan — a top donor to the country — has halted new aid payments.

Linda Thomas Greenfield, the US ambassador to the United Nations, raised the possibility of action if the military does not step down.

If “they continue the attacks that they were making on civilian populations, then we have to look at how we might do more”, she told reporters.

But so far the generals have shown no signs of being swayed by the diplomatic pressure.

Fears are growing that a broader conflict could erupt in a country plagued for decades by on-off fighting between the military and rebel ethnic armies.

Several of Myanmar’s 20 or so armed ethnic groups, who control large areas of territory mostly in border regions, have voiced their opposition to the coup and crackdown.

Three of them — the Ta’ang National Liberation Army, the Myanmar Nationalities Democratic Alliance Army, and the Arakan Army — on Wednesday threatened to join the protesters’ fight against the military.

Two other outfits — the Karen National Union (KNU) and the Kachin Independence Army (KIA) — have already stepped up attacks on military and police in recent days.

In another escalation, since Saturday the military has launched regular airstrikes targeting the KNU in eastern Karen state.

Local media outlet Karen News reported that 11 people were killed in an airstrike in a gold mining area of the state on Tuesday. AFP has yet to independently confirm these details.

“The military’s cruelty is too severe and many (armed ethnic fighters) are taking clear stances of opposition, increasing the possibility of civil war at an unprecedented scale,” UN envoy Burgener said.