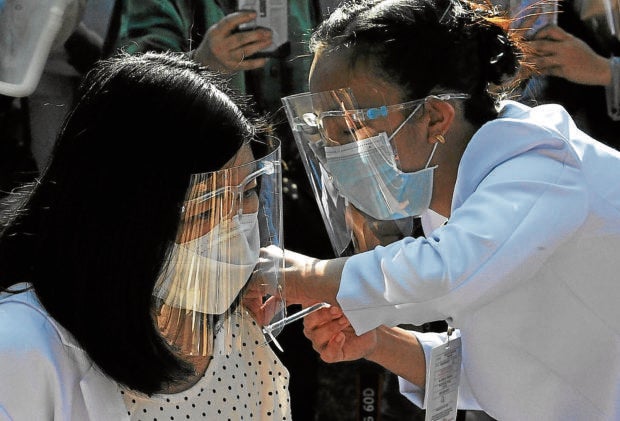 FIRST JAB A doctor in Baguio City gets her first dose of the COVID-19 vaccine produced by the Chinese company Sinovac Biotech during the vaccination drive launch in the Cordillera region on March 5. —EV ESPIRITU

“As it stands, the Philippines has a limited number of vaccines allocated for medical frontliners. Individuals excluded from the priority list that jump the vaccination queue selfishly deprive health care workers of much-need vaccines,” CHR Spokesperson Jacqueline Ann de Guia said in a statement.

Further, she said these reports of individuals who are not the government’s prioritized sector for vaccination “jeopardizes succeeding, agreed upon, free vaccine allocations from the COVAX facility, which calls for the priority inoculation of agreed-upon groups.”

According to the country’s vaccination priority groups, frontline healthcare workers are the first to be immunized against COVID-19, followed by senior citizens and people with comorbidities.

The Department of Interior and Local Government (DILG) recently said five mayors were issued show-cause orders by the agency for getting vaccinated against COVID-19 ahead of the prioritized sector.

The Department of Health (DOH) also said it received reports that non-frontliners are already getting vaccinated. The agency urged the public to report to them any individual they see jumping the priority line.

The DOH had reported the matter to the DILG, which said that it would look into the reports.

The CHR welcomed the move to investigate the matter in order “to hold alleged violators to account.”

“We continue to stress that an effective national vaccination strategy is a vital component of an efficient national health care program, and is an important component of the equitable distribution of vaccines,” De Guia said.

“In the continuing effort to address the severity of the current health situation, CHR urges the government to sustain its efforts on vaccine utilization to prevent spoilage and to refrain from misleading comments that renege on previously agreed upon indemnity fund for vaccine side effects,” she added.

The CHR also called on the government to “better clarify and coordinate” with the private sector the necessary requirements and expenses, should private companies wish to import their own dosages, to prevent bottlenecks in the procurement and distribution of vaccines in the country.

At the same time, the CHR reiterated to the government that the pandemic is a health crisis and “not a peace and order agenda” amid new restrictions imposed in Metro Manila and nearby provinces.

“The ongoing pandemic is best addressed with effective practices anchored on public health. Measures meant to curb virus transmission should ultimately be mindful of human rights standards and acceptable limits of restrictions during a health crisis,” the CHR spokesperson went on.

“Protecting the right to health, which supports a life of dignity and quality, is part of the obligations of the state to its citizens. There are other challenges too that need government attention, such as social welfare of the poorest of the poor in this critical time,” she added.

The CHR also urged the public to continue following health precautions to protect themselves and their families, to limit travel for essential purposes.