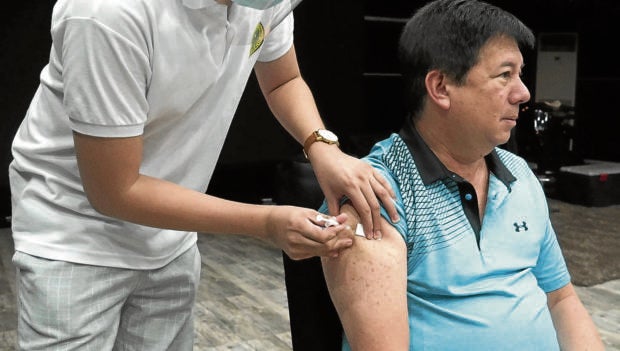 READY FOR INVESTIGATION Tacloban Mayor Alfred Romualdez gets aCOVID-19 shot on Monday. He says he is willing to face the consequences. “I have said it before that I am willing to be vaccinated first just to encourage our people to have themselves vaccinated,” he says. —PHOTO FROM MAYOR ROMUALDEZ’S FACEBOOK PAGE

MANILA, Philippines — The Department of Health (DOH) urged the public on Wednesday to watch closely the vaccination process to make sure that only people on the government’s priority list get shots against COVID-19 as the home affairs office ordered five mayors to explain why they were inoculated ahead of their turn to be vaccinated.

Due to limited supplies of vaccines, the government gives top priority to health professionals for vaccination to prevent staff shortages in the health system. Included in this group are medical students, nursing aides, hospital janitors and barangay health workers.

The World Health Organization (WHO) has set this priority as requirement for vaccine donations from the global vaccine-sharing scheme COVAX.

Breach of the requirement could jeopardize countries’ requests for vaccine donations.

Speaking at a news briefing on Wednesday, Health Undersecretary Maria Rosario Vergeire urged Filipinos to report anyone cutting the line.

“I hope we all guard our vaccines so that we can appropriately give [them] to those people who [need them most]. Let’s not take the vaccines meant for the people who are supposed to safeguard our lives,” Vergeire said.

There have been reports in recent days of local officials getting inoculated during vaccine rollouts.

The DOH had reported the matter to the Department of the Interior and Local Government (DILG), which in turn looked into the reports and on Wednesday ordered five mayors to explain why they got themselves vaccinated when they were not health workers.

Vergeire also said the DOH had no “plus one” policy that allowed family members of health workers to be vaccinated ahead of other people on the priority list.

She said those who would be proven to have cut the line would be penalized. The DOH, she said, is working with the Department of Justice to determine what penalties can be imposed on queue-jumpers.

Interior Undersecretary Epimaco Densing III said the DILG would investigate only the local officials who jumped the line and leave the investigation of the health workers who inoculated them to the DOH.

According to Densing, local officials who skip the line can be prosecuted for violating the graft and corrupt practices law.

He said the DILG had ordered five mayors to explain why they had themselves vaccinated when they were not on the top priority list.

Densing said there were other local officials who would be investigated for getting themselves vaccinated ahead of their turn.

“We have received reports of other local officials who got vaccinated this early, but we are still verifying [the reports],” Densing said.

If the officials are found guilty of breaking the priority rule, the DILG will file a complaint against them in the Office of the Ombudsman, which will impose penalties on them, Densing said.

He said the DILG would also ask Parañaque Mayor Edwin Olivarez to explain why movie actor Mark Anthony Fernandez was vaccinated on Monday despite not being a health worker.

“That made me angry, a movie actor who’s not on the priority list getting vaccinated,” Densing said, adding it was Olivarez’s responsibility to ensure that only people from the top priority group get inoculated.

In Tacloban, Romualdez, 58, said he was ready to face the DILG investigation.

“If I have violated any guidelines, I am willing to face the consequences,” Romualdez said. “I am only for the protection of our people. I have said it before that I am willing to be vaccinated first just to encourage our people to have themselves vaccinated,” he added.

Romualdez said he made his vaccination public to boost the acceptability of the vaccine, as only 50 percent of health workers in Tacloban were willing to be inoculated.

He cited the case of city health officer Gloria Fabregas, who earlier said she did not want to be vaccinated for “health reasons.”

But after seeing him vaccinated, Romualdez said Fabregas changed her mind and had herself inoculated on Monday.

City administrator Aldrin Quebec said the vaccine that was given to Romualdez was an “excess” shot from the supply given to health workers in the city.

In Bataraza, Ibba said he was a front-line worker and he wanted to convince health workers in the town that the vaccine was safe.

“That’s my only purpose. If I had not taken the vaccine, many would still be having second thoughts about getting [it],” Ibba said.

In Legazpi, Rosal said he did not volunteer to be vaccinated. The DOH and the city health office listed him for vaccination to boost the confidence of health workers in the villages who were unwilling to be inoculated, especially with the China-made CoronaVac vaccine, he said.

Rosal said his vaccination was approved by DOH Regional Director Ernie Vera, who informed him about it ahead of the vaccine rollout.

Mayors Tuan of T’boli and Villalobos of Santo Niño, South Cotabato, could not be reached for comment on Wednesday.

In the Visayas, Mayors Elanito Peña of Minglanilla, Cebu; Arturo Piollo II of Lila, Bohol, and Virgilio Mendez of San Miguel, Bohol, were also vaccinated although they were not on the priority list.

Peña said there was nothing wrong if he had himself vaccinated because he considered himself a front-line worker. “I meet our COVID-19 team a lot,” he said.

Piollo and Mendez said they agreed to be inoculated to serve as an example to their people.

“I am a municipal mayor, a senior citizen, and I believe in vaccination,” Mendez said.

The government’s vaccination drive is using 1.1 million doses of CoronaVac donated by China and the vaccine made by the British-Swedish drugmaker AstraZeneca to inoculate the country’s 1.7 million health workers.

The League of Cities of the Philippines said the Inter-Agency Task Force for the Management of Emerging Infectious Diseases, the temporary government body overseeing the government’s coronavirus response, had approved a request by the mayors to reclassify them as essential workers.

The task force, however, has not yet released a resolution for the reclassification, the league said.

In a radio interview on Wednesday, Dr. Olga Virtusio, the Parañaque City health officer, said movie actor Fernandez was vaccinated on Monday as part of the third-priority group, which includes people with disabilities and illnesses. Fernandez, she said, has hypertension and has been taking medication for a year.

Virtusio said the city government had finished vaccinating health workers that’s why it proceeded with inoculating people from the second and third priority groups, both of which, according to her, are parts of the top priority or A Category for vaccination.