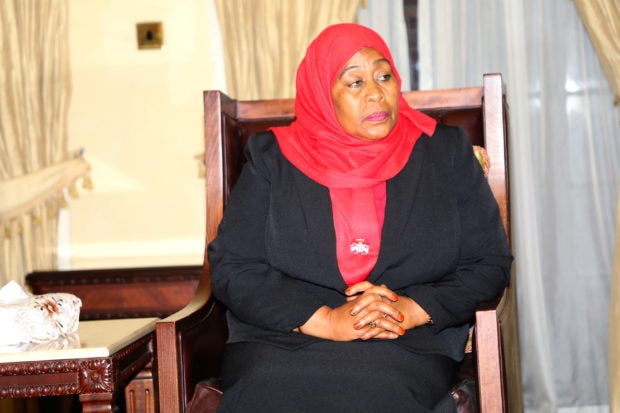 NAIROBI — Tanzania’s first woman president, the calm, measured Samia Suluhu Hassan, brings a striking change of leadership style as a successor to John Magufuli, a brash populist who drew global attention by playing down the threat of the COVID-19 pandemic.

Hassan, sworn in on Friday, is regarded as a consensus-builder, a trait that may prove an asset in dealing with the various factions within the ruling Chama Cha Mapinduzi (CCM) party and security agencies following the announcement of Magufuli’s death.

“I don’t speak in a forceful voice, like others,” she told a BBC Swahili interview last year.

“But to speak with someone in a way that they understand you, it’s not necessary to shout. I can speak to you, in a soft tone, but make it clear that you understand what I mean.”

She is the first Tanzanian president born on the occasionally restive autonomous Zanzibar archipelago, rather than the African mainland which has dominated Tanzania since the state was formed as a union of the two territories in 1964.

At her inauguration she urged Tanzanians to look forward with hope, a remark apparently aimed at dispelling a mood of uncertainty arising from Magufuli’s disappearance from public view for 18 days before his death was announced.

As a softly spoken woman and a Muslim from the islands, her personal contrast with the barnstorming Christian from the interior was one of the reasons CCM leaders picked Hassan as Magufuli’s running mate in 2015, a party insider told Reuters.

“We sense her gravitas, appreciate her intellect. We look forward to her calm and competent approach to politics. This is really big for women,” she told Reuters.

“She adopted a conciliatory tone that was not too soft and not too hard. I think she brought a certain calm that we have all been hoping for.”

In her six years serving as Magufuli’s deputy, at times she appeared to publicly embrace the unorthodox and increasingly authoritarian style of a leader nicknamed “the Bulldozer.” She emulated his habit of making surprise visits to government offices to check that civil servants were working.

But although she toed Magufuli’s line publicly, a Tanzanian politician who knows her said that privately she was uneasy about the country’s direction and felt sidelined by the camp that surrounded him.

“I’m sure there will be a lot of changes under her leadership,” the politician said, speaking on condition of anonymity.

There was no immediate reply from her office to a Reuters request for comment.

As head of state and government, Hassan will have to grapple with the health impact of a COVID-19 pandemic that her predecessor long denied, as well as its economic consequences.

She also faces the task of bringing together a country polarised during the Magufuli years. That would require building a political base of her own within the CCM, analysts say.

“She presents herself very diplomatically. We haven’t seen her yelling at people in public or firing people in public. But she is a very shrewd politician,” said Aikande Kwayu, Honorary Research Fellow at the University of Wisconsin-Madison in the United States.

Hassan, 61, rose through the ranks of the CCM after winning a seat in 2000 as a lawmaker in Zanzibar’s regional legislature. She held posts in the archipelago’s autonomous cabinet, before winning a seat in Tanzania’s national assembly in 2010.

Then-president Jakaya Kikwete named her state minister for union affairs, in charge of relations between the central government and Zanzibar. She was appointed vice-chair of an assembly charged with writing a new constitution, an effort that stalled amid tension between Zanzibar and the mainland.

Fatma Karume, a lawyer who has been a critic of Magufuli in the past, said Hassan would be a contrast to her predecessor, regarded by opponents as intolerant.

“She cannot be like him. She is a woman, she is Zanzibari, she is a Muslim. … She projects a more conciliatory tone, a kinder tone,” said Karume. “She comes from a very small island, where if you treat people badly you are going to meet them at funerals. It’s a completely different social upbringing.”