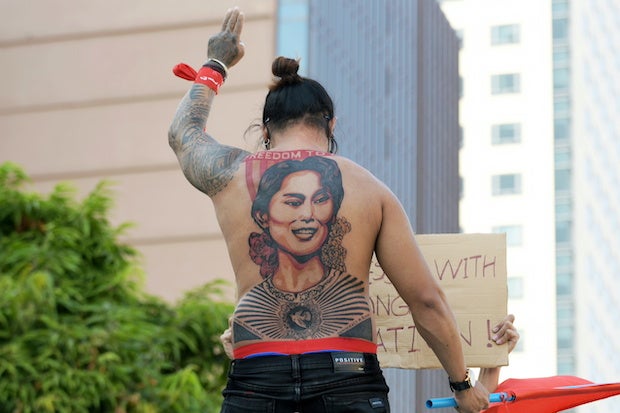 A man with a tattoo of Aung San Suu Kyi takes part in a protest against the military coup and to demand the release of the elected leader in Yangon, Myanmar, on February 8, 2021. (Photo from REUTERS)

YANGON — Myanmar’s ousted civilian leader Aung San Suu Kyi faces fresh corruption charges from the ruling junta that her lawyer said Thursday were “groundless” but could ensure she would never be able to return to politics.

The coup on February 1 that ousted Suu Kyi’s government has brought hundreds of thousands onto the streets to confront the generals, who have responded with a brutal crackdown that has left at least 200 dead.

The new military regime has already issued several criminal charges against the Nobel laureate since she was detained alongside top political allies, including owning unlicensed walkie-talkies and violating coronavirus restrictions.

On Wednesday night, military broadcaster Myawady aired a video of a Myanmar businessman confessing to giving her a total of $550,000 over several years.

Maung Weik said he had donated money to senior government figures for the good of his business.

“Aung San Suu Kyi committed corruption and (authorities) are preparing to charge her according to anti-corruption law,” an announcer said during the broadcast.

This is not the first time corruption allegations have been lodged against her.

Last week a junta spokesman said a now-detained chief minister had admitted to giving her $600,000 and more than 10 kilograms (22 pounds) of gold bars.

“Aung San Suu Kyi may have her defects… but bribery and corruption are not her traits,” he said, adding that most people in Myanmar will not believe the allegations.

However a conviction for bribery in a case against her “personal character” could see Suu Kyi “prohibited from taking part in political activities,” Zaw told AFP.

“Security forces threatened to shoot” residents if they did not remove the barricades that demonstrators have built across the commercial capital as they battle authorities, according to a doctor from the South Okkalapa township.

They also raided homes and arrested at least 10 people, he told AFP.

In neighboring Thingangyun township, one man said he had heard continuous gunfire for 30 minutes before midnight, adding he had put cotton buds in the ears of his two sons so they could fall asleep.

Even going out to buy food has become a terrifying ordeal he said, with residents forced to move quickly through the streets to avoid encountering patrols of trigger-happy security forces.

“It makes me sad and furious as well… it’s like all our dreams (of democracy) have vanished,” he said.

But “our hatred (of a military regime) is much more than our fear.”

Protesters were back on the streets Thursday, with some in Yangon testing a giant slingshot to shoot projectiles.

Sunday was the bloodiest day since the coup, with the Assistance Association for Political Prisoners (AAPP) monitoring group recording more than 70 deaths across the country.

The bulk of the death toll came in Yangon’s Hlaing Tharyar — an impoverished garment-producing township mostly housing Chinese-owned factories — with the junta later imposing martial law on the area.

Five other townships were also placed under martial law by Monday, which effectively shunts nearly 2 million of Yangon’s sprawling population under the direct control of military commanders.

Any arrests made there will be tried in military courts.

Despite mass international condemnation the junta continues to rack up an increasing toll, with AAPP reporting Thursday that more than 210 people have been killed so far.

The junta has justified the coup by claiming electoral fraud in elections last November that were won by Suu Kyi’s party in a landslide.