‘Not the best time for political lineups,’ says Pacquiao after not making 1Sambayan cut 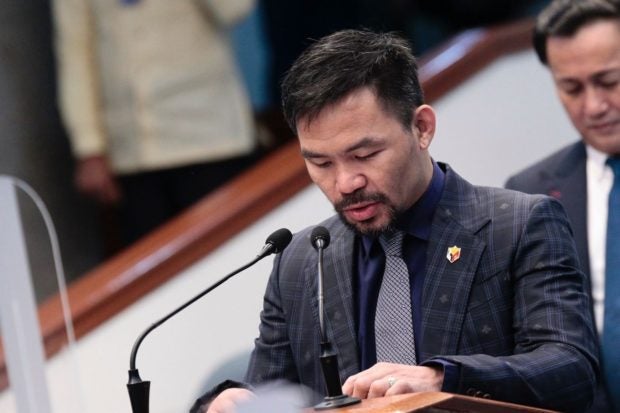 MANILA, Philippines — After failing to make the cut in the pro-democracy coalition formed by retired Supreme Court Justice Antonio Carpio, Senator Manny Pacquiao is not keen on discussing political lineups.

“This is not the best time to talk about these political line-ups,” said Pacquiao in a statement following the launch of 1Sambayan, which seeks to present a single national slate for the 2022 elections.

“I respect the position of former Justice Antonio Carpio. I know him as a person of dignity and intelligence,” Pacquiao further said.

While Pacquiao respected Carpio’s views, the boxing champion-turned-politician said elections are still a long way off.

“I will just focus on my job and continue helping our people the best way I know how. Malayo pa yan [The elections are still far away],” he said.

(We should try our best to think of ways to help our countrymen amid the spike in COVID-19 cases in the country.)

Carpio earlier claimed that it would be “difficult” to consider Pacquiao as one of the coalition’s potential candidates because he is identified with President Rodrigo Duterte whose “anointed one” they sought to challenge.

Pacquiao is currently serving as the national president of ruling party PDP-Laban, where Duterte is sitting as chairman.

“He is identified also with President Duterte. He has supported the war on drugs and he has stated that in the Senate,” the retired magistrate added. “He is also for death penalty although he quotes the Bible. So, it will be difficult for us to consider him.”

Despite his support for the President, the senator recently warned some PDP-Laban members to refrain from politics amid calls for Duterte’s vice presidential bid in 2022 among the party.

“The Filipino people deserve a better government. There are Filipino leaders who can do a much better job in running the government, reviving the economy, creating jobs for our people, and defending our territory and sovereign rights in the West Philippine Sea,” he said.

“This government is really incompetent. They’ve been tested and everybody is saying kulelat sila. So we have to offer a better alternative to our people because we don’t want the same thing to happen again, to continue in the next six years,” he added.