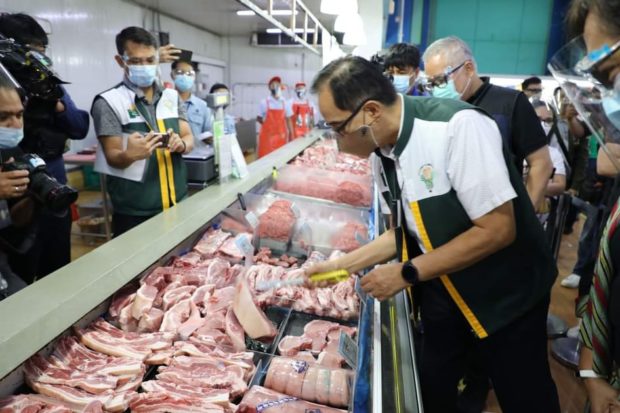 Agriculture Sec. William Dar inspects meat products at a supermarket in Mandaluyong. Image from the Department of Agriculture

MANILA, Philippines – The Department of Agriculture (DA) on Wednesay said it has created a special committee to look into allegations of corruption in the allocation of meat import certificates under the in-quota minimum access volume (MAV) following the exposé of Senator Panfilo “Ping” Lacson of the alleged racket within the agency.

In a statement, Agriculture Secretary William Dar said he “stands firm” that the issuance on the increase of the import quotas, known as the MAV, is “above-board and non-discretionary.”

“While we stand firm that the issuance of MAV in-quota allocation is above-board and non-discretionary, we have created a special committee to look into allegations made by a lawmaker that there is a syndicate in the DA engaged in a payoff scheme,” he said.

Under the MAV scheme, the DA issues MAV Import Certificate to MAV licensees that may avail part of the annual in-quota allocation of 54,000 metric tons (MT) and pay a tariff of 30 percent, Dar explained.

Firms wanting to import beyond the MAV volume, called as out-quota, will have to pay a higher tariff of 40 percent, he added.

“The DA-MAV secretariat imposes penalties on licensees that were not able to utilize 70 percent of their allocation for the year. The unused volume is recalled and deducted from the licensee and will be raffled off to qualified applicants,” Dar said.

The DA secretary also emphasized that it does not allow imports of meat and processed meat products from countries where there are existing major animal diseases.

Lacson previously bared that a syndicate in the DA is bound to have about P6 billion kickbacks from the agency’s proposal to increase the import quotas.

Because of the senator’s exposé, an inquiry of the Senate Committee of the Whole is being eyed to  probe the so-called “tongpats” (patong) scheme.

Palace spokesperson Harry Roque said that while President Rodrigo Duterte still has trust in Dar despite the allegations, he also assured that the chief executive will get to the bottom of it and investigate the alleged anomaly.   – Liezelle Soriano Roy, Trainee