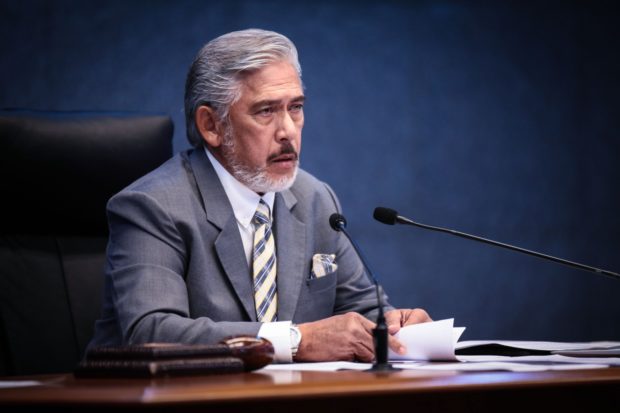 MANILA, Philippines — An inquiry of the Senate Committee of the Whole is being eyed to investigate the alleged “tongpats” (patong) scheme in the importation of pork, where kickbacks can supposedly reach up to P6 billion a year if a bid to lower the tariffs and increase import allocation on such products is approved.

(Today, we will file a resolution, Senate President Sotto and I already talked about it, to have an investigation in the Senate. In that way, we can secure documents that we need.)

(This has been happening for a long time. We are always being duped.)

In a separate Viber message to reporters, Sotto said the investigation could be taken up by the Committee of the Whole.

“The complaints encompass many issues not just confined to one or two [committees],” he said.

“Nevertheless, let’s see where the majority decides to refer [the resolution],” he added.

Sotto shared to reporters a letter sent to him by  Agricultural Sector Alliance of the Philippines (AGAP), who raised concerns over the  proposal of the Department of Agriculture (DA) to expand the minimum access volume (MAV) of pork imports from 54,000 metric tons (MT) to 400,000 MT while imposing a reduced tariff of 5% instead of 30% and 40%.

According to AGAP, the government could lose P13.95 billion in revenues by cutting the tariff rate.

“We are not against importation, and we understand its necessity to augment the shortage of supply. But 400,000 MT is excessive and will surely cause oversupply not only in Luzon, but in Visayas and Mindanao as well, where there is ample supply of pork,” AGAP’s letter to Sotto read.

“Also, losing around P13.95 billion in government revenues to importers by cutting the tariff rate is unnecessary and unacceptable. The current tariff rates already provide sufficient profits for importers to import. There is no need to incentivize them further,” it added.

AGAP also sought an investigation into why the [DA] is supposedly “willing to give away P13.95 Billion to the importers instead of using the tariffs collected to help our embattled hog raisers.”

“The hog industry has lost almost P83 billion due to African Swine Fever (ASF) that has been continuously spreading in the country,” AGAP said.

“The P13.95 billion tariff that would be collected from pork importation can finance the indemnification of all ASF infected hogs,” it added.

‘Get to the bottom’

Lacson underscored the need to investigate the “tongpats” system within the DA to enable the Senate to gather enough documents and data to “get to the bottom” of the alleged scheme.

(As of now, there are people who have submitted Customs and DA documents to my office. We are compiling them, consolidating them but still, we need to know which data we further need in order to get to the bottom of this anomaly.)

Lacson also said the proposed investigation would also cover the “misdeclaration” of pork products being imported into the country.

For instance, Lacson said he studied the export records of pork products from China and compared it to the import records of the same products being brought into the Philippines.

(For example, China declared that they imported one ton of pork to the Philippines. What we recorded here is 100 kilos of pork instead of one ton, that means 900 kilograms are misdeclared or underdeclared.)