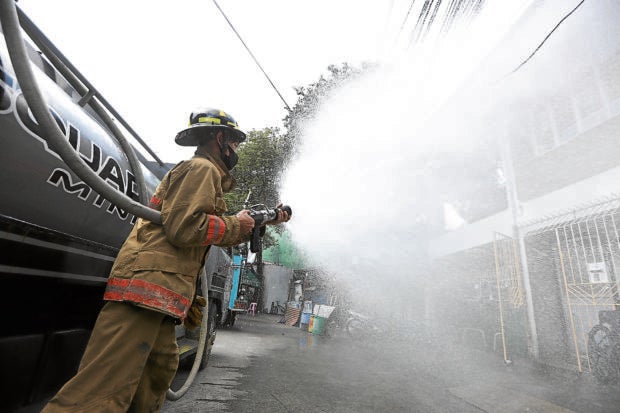 WILL THIS WORK? One of several volunteer firefighters working together with the Quezon City Disaster Risk Reduction and Management Office hoses down a section of Apo Street in Maharlika village. —NIÑO JESUS ORBETA

MANILA, Philipines — A coalition of medical groups, in an online news conference on Tuesday, gave the government a “failing mark” as they assessed its year-long response to the COVID-19 pandemic.

“It’s an F, a 5.00, with no remedial or any means to redeem itself,” said Angel Sison, who represented the Philippine Medical Students’ Association, which forms part of the Coalition for People’s Right to Health (CPRH).

Dr. Joshua San Pedro, a co-convenor of CPRH, criticized Malacañang’s own assessment of having done an “excellent” job.

He said the government failed to “flatten the curve” and reduce to less than a thousand the average number of new cases per two weeks, since the government declared a public health emergency a year ago.

“It’s as if 2020 had not ended yet,” San Pedro said. But the country is still in the first wave of the pandemic and is currently seeing only a “surge” in COVID-19 infections, the physician said.

He also pointed out the country’s positivity rate, or the percentage of COVID-19 testing that yields positive, as having reached 12 percent, surpassing the 10 percent in August last year when infections were at their peak.

Essential measures CPRH also said the government failed to strengthen contact tracing and mass testing, the essential measures to counter the spread of the virus. San Pedro said 35 provinces in the country still had no testing hub, while 99 out of 230 accredited testing laboratories were concentrated in Metro Manila.

He said the government failed to observe its own contact-tracing ratio of 1 infected person: 30-37 contacts, as proposed by Baguio City Mayor Benjamin Magalong. “It’s very small,” San Pedro said of the government’s 1:7 contact ratio so far, in contrast, he said, to contract-tracing efforts in South Korea, Vietnam and Taiwan.

Furthermore, San Pedro said there was no transparent audit of government funds from the legislated Bayanihan Acts 1 and 2 relief programs, while most people spent out of their own pockets for testing and treatment.

“How could we expect the health care workers to carry the burden of the pandemic when the [health] budget was slashed just before the pandemic,” he said. The groups also pointed out that government officials themselves violated quarantine protocols, whereas the government applied a “punitive” response to ordinary people who violated the protocols.

Karen Faurillo of the All UP Workers Union in Manila and the Philippine General Hospital (PGH) said health workers have become “exhausted” in fighting the virus because of labor issues such as the workers’ being understaffed, as well as their lack of tenure, delayed benefits, and insufficient protective gear and supplies.

Robert Mendoza, president of the Alliance of Health Workers, said personal protective equipment were starting to run out again, while one hospital started charging them for a suit. Faurillo also pointed out that “the vaccines the government had provided us were donated…with questionable findings.”

She said this month alone, 82 health workers at PGH became infected with the virus.

According to Mendoza, 27 employees at the Philippine Heart Center, 33 at Amang Rodriguez Memorial Medical Center, and nine at San Lazaro Hospital were themselves admitted as patients this month.

“We have no paid leaves for rest,” she added. ‘Small thing in our lives’ President Duterte addressed the nation on Monday night as the country marked a full year of being quarantined. But his remarks prompted criticism, particularly after he said “I will just say to my countrymen that do not despair. We can beat this COVID. This is a small thing in our lives.”

“We have been through a lot of things that are more serious, more difficult, and made us cry more,” he also said. Gabriela Rep. Arlene Brosas said the remarks showed “how detached President Duterte is from the plight of ordinary people.”

“No wonder we are back to where we are, or even worse, exactly a year after the imposition of the lockdown,” she said in a statement.

Brosas also said “the pandemic is not a peace and order problem but a public health system issue.” ACT Teachers Rep. France Castro said “The whole nation is suffering from the incompetent and militaristic policies of the Duterte administration that does little to nothing in addressing the pandemic.”

Sen. Risa Hontiveros said “We are not ready for 8,000 to 12,000 daily cases which the Octa Research is projecting by the month of April, when only about 0.1 percent of the entire population as had access to the vaccine, a far cry from the [government target of] 70 percent to achieve herd immunity.” She urged the government to set up a vaccine tracker, to allow the public to see in real time the use of vaccines delivered to the country. Hontiveros welcomed Mr. Duterte’s order for the distribution of free face masks, saying it’s “better late than never.”