MANILA, Philippines — Twenty out of 149 hospitals in Metro Manila were placed under critical status in terms of bed capacity solely for COVID-19 patients while 23 were listed under the high-risk status, based on the latest date from the Department of Health (DOH) as of March 14.

The figure increased from the previous 18 hospitals classified as critical last March 13. 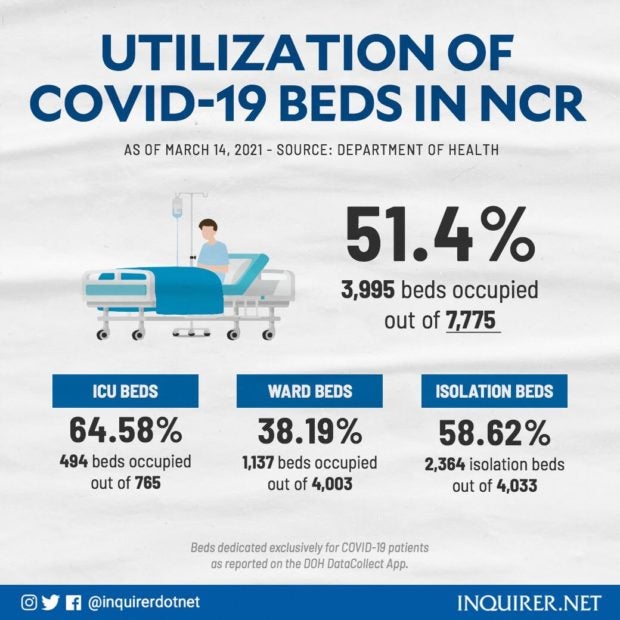 Under the critical level, hospitals have already reached more than 85 percent of its bed occupancy for COVID-19 patients.

Hospitals fall under the safe level if bed utilization rate is less than 60 percent.

The bed occupancy rate for the whole of Metro Manila remains at the safe zone at 51.4 percent, or 3,995 out of the 7,775 total beds occupied.

INQUIRER.net analyzed the most recent available data, which is on March 14, 2021, based on the DOH’s COVID-19 tracker.

This article is aimed at showing how prepared Metro Manila hospitals are, should there be a surge in COVID-19 infections.

Only hospitals in Metro Manila, however, that have data on COVID-19 beds allocated for the treatment of coronavirus patients were included in this article.

The Department of Health (DOH) on Monday reported a record-high COVID-19 infections for this year with a total of 5,404 new cases. This brings the country’s total caseload to 626,893.