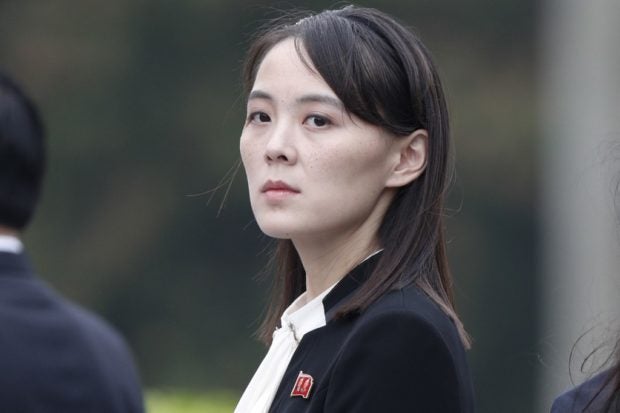 SEOUL — North Korean leader Kim Jong Un’s influential sister slammed the US and South Korea on Tuesday, state media reported, as the new US secretaries of state and defence began a visit to Tokyo and Seoul.

The US and South began joint military exercises last week and Pyongyang’s official Rodong Sinmun newspaper carried a statement from Kim Yo Jong offering “a word of advice to the new administration of the United States that is struggling to spread the smell of gunpowder on our land from across the ocean”.

“If you wish to sleep well for the next four years, it would be better not to create work from the start that will make you lose sleep,” she said.

It is the first explicit reference by the nuclear-armed North to a new president in Washington, more than four months after Joe Biden was elected to replace Donald Trump — although it still did not mention the Democrat by name.

Trump’s unorthodox approach to foreign policy saw him trade insults and threats of war with Kim Jong Un before an extraordinary diplomatic bromance that saw a series of headline-grabbing meetings.

But ultimately the relationship made no progress towards Washington’s declared aim of denuclearizing the North, which is under multiple international sanctions for its banned weapons programs.

It has isolated itself further, imposing a strict border closure to protect itself against the coronavirus pandemic that first emerged in neighboring China.

Shortly before Biden’s January inauguration, leader Kim decried the US as his country’s “foremost principal enemy” and Pyongyang unveiled a new submarine-launched ballistic missile at a military parade.

The talks process was brokered by the South’s President Moon Jae-in but relations between Seoul and Pyongyang have been in the deep freeze since Kim and Trump’s summit in Hanoi collapsed in February 2019.

Kim Yo Jong is a trusted adviser to her brother and was a key voice when inter-Korean tensions mounted last year, culminating in the North blowing up a liaison office on its side of the border.

Seoul and Washington are treaty allies, with the US stationing around 28,500 troops in the South to defend it against its neighbor, and they began computer-simulated joint military exercises last week.

The North always condemns such drills as preparations for invasion, and in her statement, Kim Yo Jong said: “The South Korean government yet again chose the ‘March of War’, the ‘March of Crisis’ rather than a ‘warm March” before all the people.”

“It will not be easy for the warm spring days of three years ago to come back if the South Korean government follows whatever instructions of its master,” she added, threatening to scrap a North-South military agreement if Seoul acts “more provocatively”.

Her statement came after Pentagon chief Lloyd Austin and top US diplomat Antony Blinken arrived in Japan on Monday on their first overseas trip.

They will be consulting with Tokyo and Seoul on the new administration’s review of US policy towards the North and looking to rally key Asian allies as a bulwark against China.

Beijing presents multiple challenges to Washington on trade and diplomatic fronts, and is also the North’s key diplomatic backer and main provider of business and aid.

Washington has attempted to reach out to Pyongyang “through several channels starting in mid-February, including in New York”, state department deputy spokesperson Jalina Porter told reporters on Monday.

“To date, we’ve not received any response from Pyongyang,” she added.

The “New York channel” is a reference to the North’s mission to the United Nations, as Pyongyang and Washington do not maintain diplomatic relations.

Austin and Blinken travelled separately and met in Japan for the first leg of their trip, holding talks with their counterparts as well as Prime Minister Yoshihide Suga.

They will both continue on to Seoul on Wednesday before Austin heads to India while Blinken returns to the US for talks with Chinese officials.

Biden’s team has been deliberately slow to start the usually hectic pace of diplomatic travel that marks a new administration, hoping to set an example discouraging travel during the pandemic.

But the administration has also made clear it wants to reset US relations with the rest of the world, particularly traditional allies, after the tumult of the Donald Trump era.