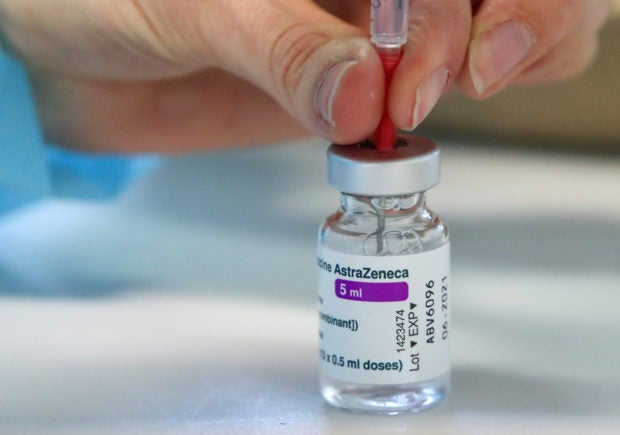 A medical worker prepares a dose of AstraZeneca’s COVID-19 vaccine amid a vaccination campaign in Ronquieres, Belgium March 15, 2021. REUTERS/Yves Herman

MEXICO CITY — Mexico has asked the United States to share doses of AstraZeneca’s COVID-19 vaccine it has in stock, a senior diplomat said, following up on a request made by President Andres Manuel Lopez Obrador to his counterpart Joe Biden.

Deputy foreign minister for multilateral affairs Martha Delgado said that since the United States had not yet approved the AstraZeneca vaccine it would be a good candidate to offer to Mexico, which has started using it already.

“The possibility exists of being able to have access to some AstraZeneca batches they have,” Delgado said in an interview with Reuters late last week, saying Mexico had made the request in diplomatic conversations since Lopez Obrador spoke to Biden on March 1.

“That vaccine is already authorized in Mexico, but doesn’t have authorization at the moment in the United States,” she said. “They could release it.”

Lopez Obrador asked Biden for a vaccine “loan” during the virtual meeting, after Mexico’s vaccine strategy was knocked off course by a delay in deliveries of the vaccine developed by Pfizer Inc and German partner BioNTech SE.

Delgado, who leads Mexico’s diplomatic effort to get vaccine supplies, said the United States had not said whether it would meet the request for AstraZeneca and other vaccines, which she said included those from Moderna Inc and Novavax Inc. The Novavax shot also is not yet authorized in the United States.

A U.S. official, who asked not to be named, said the United States had not agreed to loans or distributions of AstraZeneca vaccines at this time. The person said the United States was not currently in a position to share doses but had already committed to doing so once the supply issue is dealt with domestically.

The U.S. State Department referred inquiries to the Mexican government and vaccine companies. The White House did not immediately respond to requests for comment.

A top U.S. health official told Reuters on Monday that AstraZeneca’s vaccine could be authorized by U.S. regulators in about a month.

The request for AstraZeneca doses is notable because the British-developed drug is the backbone of Mexico’s vaccine strategy, under a shared production deal with Argentina in which Mexico is due to bottle the doses for Latin America.

Delays in the Mexican regulatory process mean the first doses will now not be shipped until the first week of May, Delgado said. Originally, the hope was for production by March, which had already slipped into April.

Delgado said Mexican diplomats also had to overcome delays in delivery of laboratory filters essential for vaccine production from U.S. drugmaker Merck & Co. That situation has not affected the production timeline, she said.

Under the deal with Argentina, the vaccine is produced in bulk in the South American country and shipped to Mexico for bottling. Two shipments of 6 million doses each were sent in January and early February.

Last month, Spanish newspaper El Pais reported that delays at the Mexican laboratory, Liomont, led the Argentine manufacturer to divert the equivalent of 12.8 million doses of vaccine material to a U.S. AstraZeneca bottler.

Delgado said she was not aware of such a diversion, adding that a new shipment from Argentina was due to arrive in Mexico “very soon.”

“There is no plan of sending them to other places. What did happen is that the U.S. was not exporting some goods that the Mexican lab needed to finish the process,” the official said, requesting anonymity to speak freely.

The delays in U.S. and European vaccines have pushed Mexico toward deals with Russia and China.

China offered vaccines quickly, whereas Western countries had prioritized their own populations, leaving developing economies in the lurch, Delgado said.

She said the U.S. situation was understandable given the scale of the pandemic there, adding that the assistance from China would be long remembered.

“Mexico will never forget the countries that helped us,” she said.