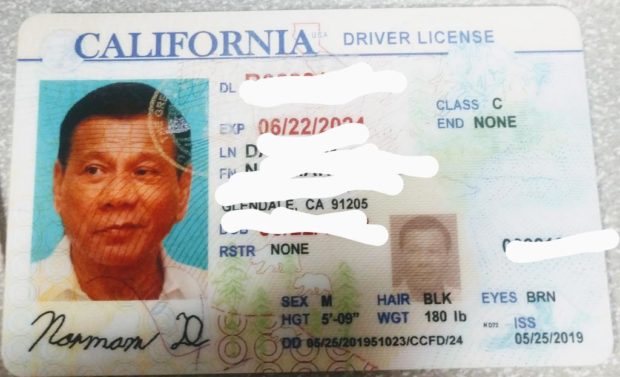 Vice Officers recognized the picture used on a fake ID, to be that of the President of the Philippines. Good thing our Officers patrol Historic Filipino Town and are up to speed. Nice try 😂🥊🇵🇭 💯@LAPDALopez @LabradaAl @LAPDHQ @TFALpodcast pic.twitter.com/YhGkn01BEx

The owner of the fake California driver’s license, who had a Glendale address, used a smirking photo of the Philippine president.

Although police censored some information printed on the ID, including the name, the signature beneath the ID photo seemingly read “Norman D.”

Police did not disclose if they were able to identify the owner of the fake ID or if he or she was Filipino American.

Read Next
NY assembly speaker OKs impeachment probe as calls grow for Cuomo to resign
EDITORS' PICK
Smart celebrates all kinds of ‘#SimplyLove’ for Pride Month
WATCH: INQside Look with Fil-Am actress Aina Dumlao
SWS: Over 12M Filipinos still jobless as of May 2021
SANTIS Delicatessen: The road to survival is sweet and savory
Smart brings KCON:TACT especially 4U to subscribers from June 19 to 27
Dizon: 40 of 119 ‘Build’ projects done by 2022
MOST READ
William Martinez sometimes feels his kids ‘don’t remember’ him anymore
De La Hoya warns Spence: Be careful of Pacquiao
Mayor vs mining ‘guilty of oppression’
DOTr expects SMC’s P735-B airport project to break ground within next 60 days
Don't miss out on the latest news and information.