What you need to know about the Johnson & Johnson vaccine 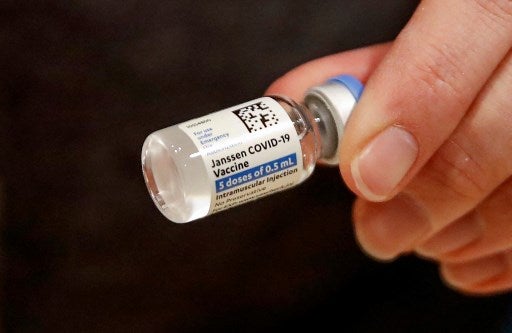 (FILES) In this file photo taken on March 5, 2021, registered nurse Florisa N. Lingad holds a Johnson & Johnson Covid-19 vaccine at a vaccination center established at the Hilton Chicago O’Hare Airport Hotel in Chicago, Illinois. – The European Medicines Agency said on March 9, 2021, that it is set to decide whether to authorize Johnson & Johnson’s Janssen single-shot coronavirus vaccine for the EU on March 11. If approved by the Amsterdam-based regulator, the vaccine would be the fourth to get the green light for the 27-nation bloc, in a boost for its slow-starting vaccination program. (Photo by KAMIL KRZACZYNSKI / AFP)

Washington, United States — Johnson & Johnson’s (J&J) single-dose COVID-19 shot is expected to be authorized by the European Union on Thursday, the bloc’s fourth vaccine in the fight to end its chapter of the pandemic.

Here’s what you need to know.

How safe and effective is it?

Perhaps the most important figure to be aware of is “zero.”

That’s how many people have died from COVID-19 after receiving the shot in a massive global trial of 40,000 people, compared to seven who got the placebo.

Overall, the vaccine prevented moderate to severe COVID-19 by 66.1 percent 28 days after the shot, but this rose to 85.4 percent when considering only severe disease.

What makes it most striking was that the good results against severe disease held up in both South Africa and Brazil, where concerning variants were dominant during the trial period.

In terms of safety, an analysis of 44,000 people showed it was generally well-tolerated, with typical side-effects like injection-site pain, headache, fatigue, and muscle pains.

There has been at least one case of anaphylaxis (severe allergic reaction) reported — and such reactions have also been recorded for other COVID-19 vaccines in rare instances.

Documents shared by the US Food and Drug Administration, which has already given the shot emergency approval, showed a handful of cases where people who took the vaccine had developed hives.

The FDA also said long-term monitoring was needed to determine whether the vaccine was linked to a small number of cases of potentially dangerous clotting, and to tinnitus (ear ringing).

How does it compare to other authorized vaccines?

The Pfizer and Moderna RNA-based vaccines were shown to have efficacies of around 95 percent against all forms of Covid-19 — but it’s still hard to make a direct comparison.

That’s because their clinical trials took place before newer variants, some of which have been shown to be less susceptible to current vaccines, were well established.

The RNA vaccines probably still have an edge, but the J&J vaccine brings important logistical advantages to the table.

It requires only one shot and can be kept long-term in refrigerators, rather than freezers — especially important for developing countries.

Though there’s been one reported case of anaphylaxis, the suspicion is it will cause fewer such reactions because of the way the vaccine is formulated.

What technology does it use?

The J&J vaccine uses a common-cold-causing adenovirus, which has been genetically modified so that it can’t replicate, to carry the gene for a key part of the coronavirus.

The part is known as the “spike protein” and it’s what gives the virus its crown-like appearance.

The vaccine delivers the instructions to make this protein to human cells, and our immune systems then develop antibodies against it, preventing the virus from invading cells.

J&J’s shot is known as an “adenovirus vector vaccine” and the company previously produced a European Union-approved Ebola vaccine using the same technology.

Oxford-AstraZeneca and Sputnik’s shots are both adenovirus vector vaccines, too.

They all use double-stranded DNA molecules to carry genetic instructions, rather than single-stranded RNA used by Pfizer and Moderna.

DNA is more rugged, which allows these vaccines to be stored at warmer temperatures.

What else do I need to know?

J&J is moving ahead meanwhile with clinical testing for children and pregnant women soon.

While the J&J vaccine so far has been single-dose, the company is also testing a two-dose regimen to see if it provokes a better response.

But RNA vaccines might have the edge over adenovirus vaccines when it comes to boosters.

Some scientists have raised concerns that the immune system will recognize and attack adenoviruses it has previously encountered, which in turn reduces the second shot’s efficacy.

This could become particularly important as makers look to develop variant-specific vaccines since the adenovirus vaccine makers might need to find new vectors.