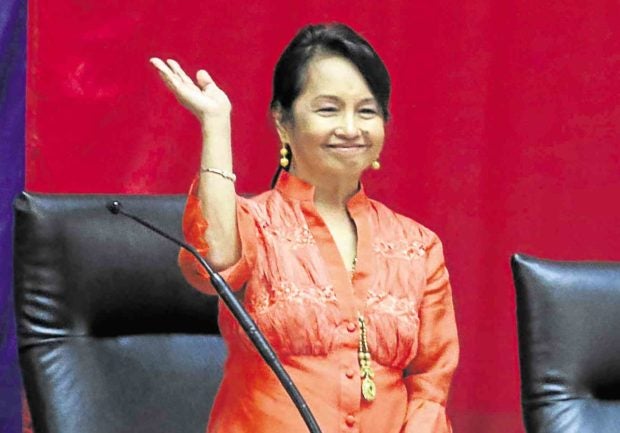 WINNING STREAK. Gloria Macapagal-Arroyo emerges triumphant in a July coup at the House of Representatives. Her winning streak continued with the Supreme Court ruling junking the graft cases against her in connection with the $329 NBN-ZTE deal. INQUIRER PHOTO

In a 13-page resolution dated Feb. 23, 2021 but was made public only recently, the high court’s Third Division dismissed the bid of the Office of the Special Prosecutor to reverse the ruling of the anti-graft court, which had granted Arroyo’s demurrer to evidence in September 2016.

The high court ruled that while a judgment of acquittal may be assailed in a petition for certiorari under Rule 65 of the Rules of Court, it has to be on the grounds of grave abuse of discretion, stating that the anti-graft court acted “in a capricious, whimsical, arbitrary or despotic manner in the exercise of its jurisdiction as to be equivalent to lack of jurisdiction.”

In this case, the SC said the petition was filed under Rule 65, but the Special Prosecutor assailed the supposed “misapprehension of facts and the evidence on record” by the Sandiganbayan.

“A writ of certiorari can only correct errors of jurisdiction or those involving the commission of grave abuse of discretion, not those which call for the evaluation of evidence and factual findings. Accordingly, we cannot condone this specious approach at stretching the allowable limits of questioning a judgment of acquittal,” the high court said.

“While [the Special Prosecutor] want this Court to stray from pivotal reasons given by the Sandiganbayan for the grant of the demurrer to evidence, it bears stressing that nothing therein detracts from the fact that relevant and material evidence was scrutinized, considered and evaluated,” it added.

Arroyo was accused of violating Section 3 (i) of the anti-graft law when she approved the alleged highly anomalous telecommunication project with the Chinese state-owned firm supposedly for personal gain despite knowing the irregularities in the project, according to government prosecutors.

The NBN-ZTE project would have interconnected government offices nationwide through broadband technology.

Likewise, the former President was charged with violation of R.A. 6713 for having lunch and playing golf with ZTE officials while the broadband project proposal was still being assessed by the government.

However, Sandiganbayan held that the prosecution failed to present sufficient evidence to support its claim that the contract was grossly disadvantageous to the government, or Arroyo’s interest for personal gain in the NBN-ZTE project, despite that she was then the chair of the National Economic Development Authority (Neda) board that approved the project.

As to the accusation that Arroyo violated Section 7 (d) of R.A. 6713, the anti-graft court said that it did not have any territorial jurisdiction to rule on the matter because it was committed outside the country.