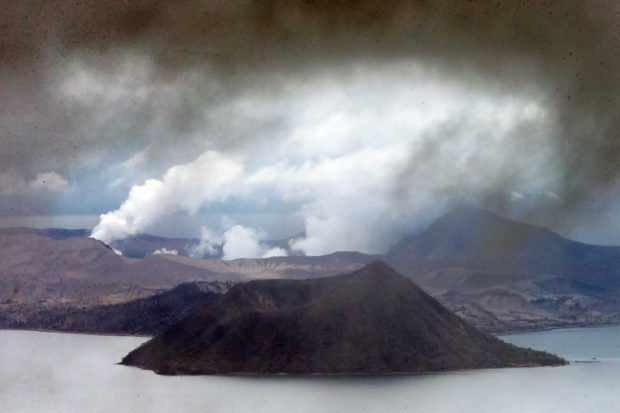 MANILA, Philippines — State volcanologists on Tuesday raised the status of Taal Volcano to Alert Level 2, signaling  “increasing unrest,” over a year since its last phreatic eruption.

In its 8 a.m. bulletin, the Philippine Institute of Volcanology and Seismology (Phivolcs) said that since Feb. 13, the volcano has exhibited increased unrest, or probable magmatic and hydrothermal activity, such as 28 volcanic tremor episodes.

Of the recorded earthquakes, four were low-frequency volcanic earthquakes, and one hybrid earthquake at shallow depths of less than one and a half kilometers beneath Taal Volcano Island or TVI in the past 24 hours, Phivolcs said.

“The total number of volcanic tremor events has risen to 866 since the onset of increased activity on 13 February. In addition to these, a total of 141 low-frequency volcanic earthquakes (LFVQs) have occurred within one kilometer depths beneath TVI and immediate vicinities. Overall, seismic activity in the past month indicates increased magmatic and hydrothermal activity at shallow depths beneath TVI.”

Aside from this, state volcanologists also recorded a 74.6ºC and continuing increase in acidity to pH 1.59 from a pH of 2.79 in January 2020 of the volcano’s Main Crater Lake (MCL)

The changes in the MCL, Phivolcs said, is “caused by sustained volcanic gas input into the shallow hydrothermal system that feeds into the lake, signifying degassing of magma intruded at depth during the January 2020 eruption.”

With Alert Level 2, Phivolcs added that there is “probable magmatic activity that may or may not lead to an eruption.”

However, evacuation of residents living near the volcano is not yet recommended, Phivolcs said.

“However, the public is reminded that Taal Volcano Island is a Permanent Danger Zone (PDZ) and that entry into TVI, especially the vicinities of the Main Crater and the Daang Kastila fissure, must remain strictly prohibited,” Phivolcs said.

“Local government units are advised to continuously assess previously evacuated barangays around Taal Lake for damages and road accessibilities and to strengthen preparedness, contingency, and communication measures in case of renewed unrest. Residents of these barangays are advised to be always prepared, to keep calm and listen to information only from trusted or verified sources.”

In January last year, Taal Volcano spewed tons of ash in a phreatic eruption that forced thousands of residents to evacuate. The ash fall reached Metro Manila and nearby provinces. — with reports from Delfin Mallari