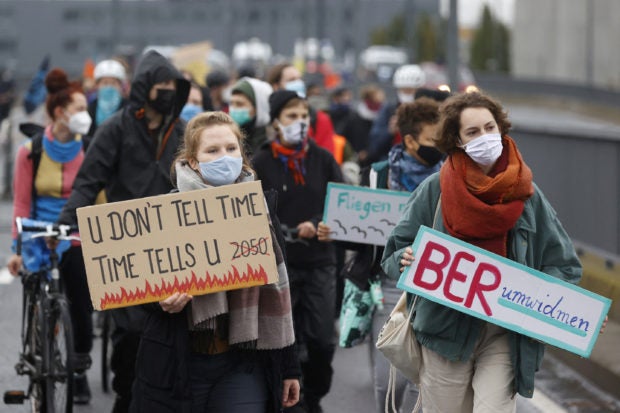 Demonstrators walk with placards in front of Berlin’s airport “Berlin Brandenburg Airport Willy Brandt” (BER) during a protest of climate activists prior its opening in Schoenefeld, southeast of Berlin, on Oct, 31, 2020. Image: AFP/Odd Andersen

Environmental awareness and public support for government action is global and is starting to transcend traditional political divides, research from the United Kingdom’s University of Cambridge suggests. According to the survey, in six out of the seven countries studied, at least nine out of ten participants agreed that governments should do more for the environment.

Some 14,627 adults took part in the survey, carried out in partnership with the polling agency YouGov, or around 2,000 people for each of the seven countries studied (Brazil, China, India, Indonesia, Poland, U.K. and the United States). Participants were asked about the quality of the environmental policies applied by the governments of their countries. The results were conclusive: in six of the countries studied, at least nine out of ten participants agreed that governments should do more for the environment.

In the U.S., this figure reached 79%. According to the survey, 55% of participants who voted for Donald Trump in the November 2020 presidential elections considered that the U.S. government should be more proactive on the environment, compared to 95% of those who voted for the current president, Joe Biden. A difference that may not be surprising, given the former U.S. president’s overt climate skepticism.

In the U.K., the difference between Conservative supporters (87%) and Labour supporters (97%) proved less marked, as was the difference between Brexiteers and Remainers, with 96% of Remain voters and 86% of Leave voters in agreement on the need for more action. Such figures suggest that the need for action on the environment is becoming increasingly self-evident for citizens across the political divide.

“We live in a time of polarization, and environmental issues have long embodied the political divisions in society. However, this may be changing. We can see an overwhelming consensus emerging for greater government-led action to protect the environment in major nations,” explains study co-author Dr. Lee de-Wit, a political psychologist at Cambridge, in a statement.

Participants also “voted” for the pro-environment policies that they would like to see backed by their country’s governments at COP26, due to be held in November in Glasgow, Scotland. The most popular on average was action “to protect and preserve” wildlife, marine life and plants, followed by a policy “to plant more trees to absorb the gases that cause climate change.”

Dr. Sander van der Linden, director of Cambridge’s Social Decision-Making Lab, also involved in the research, added, “These survey results make it clear that irrespective of age, gender and nationality, citizens around the world want governments to do more to protect the environment.” JB

Dutch inventor unveils device to scoop plastic out of rivers