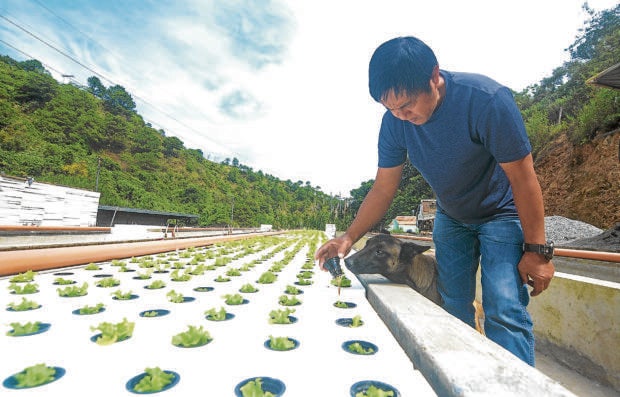 NEW INCOME SOURCE Neri Reynold Fangloy, who used to work in his community’s mining tunnels, monitors the daily growth of vegetables and tilapia in the aquaponics farm that he and fellow small-scale miners started as an alternative income source in Itogon, Benguet. —PHOTOS BY KARLSTON LAPNITEN

BAGUIO CITY, Benguet, Philippines — Water may just be the right pay dirt to give displaced small-scale miners here sustainable livelihood after their tunnels closed due to the government’s crackdown on illegal mines since 2018.

The “green gold” potential of aquaponics has been promising since the Batawil Small-Scale Miners Association (BSSMA) in Atok Trail village took on the venture last year.

An unconventional form of agriculture in the country, aquaponics combines aquaculture and hydroponics, or water-based planting.

Found on the outskirts of Baguio, the 1000-square-meter aquaponics farm was constructed by the BSSMA from a P1.1-million project grant from the Czech Republic’s Ministry of Foreign Affairs.

The pilot phase is expected to be completed soon, before the start of the first cropping season, said Neri Reynold Fangloy, the association president.

“We don’t want to dive in headfirst and make a thousand blunders. We have to be strategic and careful to avoid wasting and losing resources,” Fangloy told the Inquirer during a farm visit on Feb. 15. 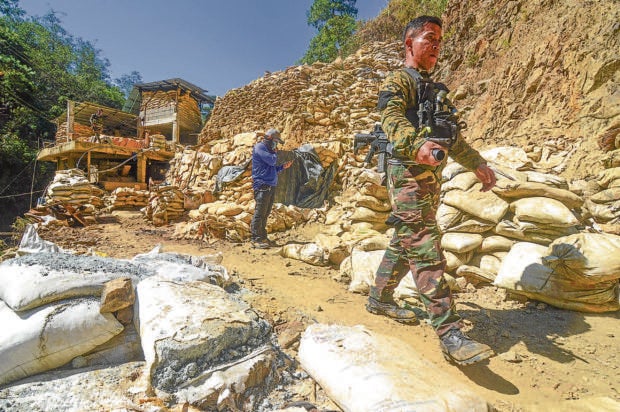 CRACKDOWN In February 2018, a government team led the closure of over a dozen illegal small-scale mines operating within the Philippine Military Academy reservation in Baguio City’s Kias village.

The integral system consists of six long rows of 3-foot-wide vegetable pool beds, which are interconnected to four large water vats and four tanks. Tilapia are raised in three of the vats, which were recycled from tanks previously used in recovering gold u­sing chemicals.

Water is pumped and filtered from a spring and aerated to the pool beds before it is recycled or drained into a nearby creek.

From propagating different leafy vegetables, association members have been successful in growing lettuce and watercress. Their tilapia were also well adapted to the setup, which turns their waste products into natural fertilizers for the plants.

Fangloy said the group was also planning to add crustaceans, such as freshwater shrimps, which command good prices in the market.

The aquaponics farm was borne out of a need for a sustainable livelihood for the small-scale miners after Environment Secretary Roy Cimatu ordered the closure of their tunnels in September 2018.

Like many other miners in Benguet, the association applied several times for the sanctioning of their operations but was denied due to technical and procedural challenges. 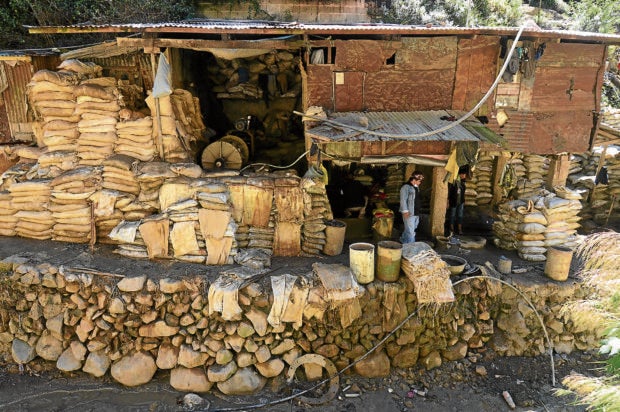 RIPPLE EFFECT Pocket mining operations outside the lone approved Minahang Bayan in the Cordillera region are constantly monitored by the Mines ang Geosciences Bureau, leading to raids and arrests in Baguio City and the neighboring Itogon town in Benguet province.

They finally quit mining after repeated police raids on their mines in 2019.

“It was really difficult because our families relied on that livelihood and we did not have a fallback,” said miner Honorio Chaokas.

Like his fellow miners, Chaokas took a temporary job as a laborer before the aquaponics project received the grant. He now helps manage the farm’s daily operations.

Fangloy said he had to undergo a crash course in aquaponics, and dedicated several months to researching and educating himself on the unique farm production.

“People are now becoming more conscious about the food they eat and aquaponics can provide this demand for natural, chemical-free food,” he said.

The group registered as a rural-based farmers’ association at the Department of Agriculture and underwent training on aquaponics. It pitched the project proposal to various government agencies but was denied due to stringent requirements and technical disqualifications. 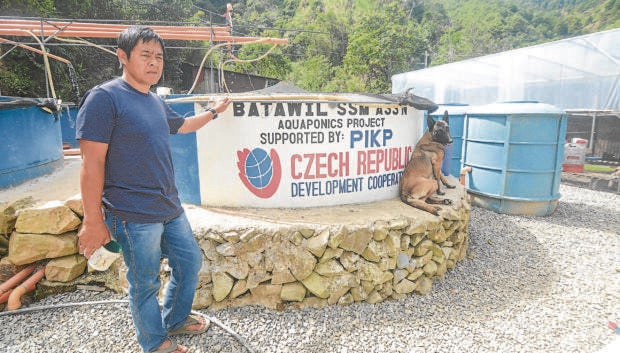 FOOD, JOB SECURITY With ample startup support, turning displaced miners to farmers, like the members of the Batawil Small-Scale Miners Association, may be the key to resolving the issues on food and job security in the Cordillera region.

In 2019, the association sought help from Partners for Indigenous Knowledge Philippines, an organization involved in assisting indigenous peoples, which proposed the project to the Embassy of the Czech Republic.

Construction immediately started after the signing of a memorandum of agreement with the Czech Embassy in March 2020.

From leveling the ground to fitting the pipes, the mi­ners themselves built the farm, Fangloy said.

The construction activities provided the much-needed source of income to the association’s 30 members during the pandemic, when getting alternative jobs became even more difficult.

In October 2020, the main component of the project was completed though it took two more months to refine the facility.

The local police, who escorted the Czech party, were surprised when they learned that the miners whom they previously raided were welcoming the ambassador, Chaokas said.

“It was an amusing encounter but at least they got to see the green gold we are now mining,” he said in jest.

Fangloy said the goal was to develop the aquaponics farm as a demonstration and training site for interested associations and individuals, especially the displaced small-scale miners like them.

It could also be developed as an agritourism destination, he added.

Nestled far from the city bustle, the farm is suited perfectly for that kind of business.

To reach the farm, it takes around 8 kilometers from Baguio’s central business district to reach the concrete dead-end road of Atok Trail village.

It will take another kilometer and a half of off-road track going down the base of the mountain, literally just a few meters from the boundary with Gumatdang village in Itogon town.

Local entrepreneurs have shown interest in partnering with the association, but Fangloy said the market would initially be the consumers in the local community.

“We are currently focused on making the farm sustainable, but our long-term plans never take the backseat. After all, we made it this far,” he said.