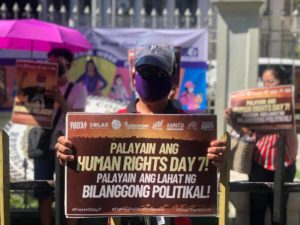 Trade union organizer for Defend Jobs Philippines, Dennise Velasco was arrested on Dec. 10, 2020, after members of the Quezon City Police District found a bag of ammunition and explosives inside his house during the implementation of a search warrant.

Upon his arrest, the police informed his partner Diane Zapata that Velasco will be taken to the FEU Medical Center to undergo an RT-PCR test or Swab test for Covid-19. 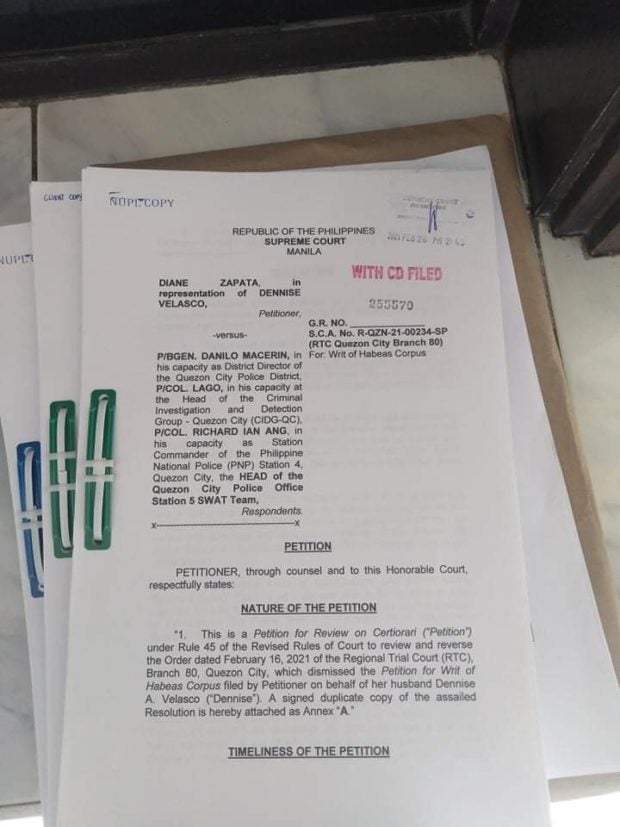 Zapata, however, based on the petition, said that upon checking, Velasco was not brought to the hospital.

Velasco was taken to Camp Tomas Karingal in Quezon City.

Zapata said the police refused their request to wait for their counsel.

Instead, a lawyer from the Public Attorneys’ Office has been provided so that the inquest could proceed immediately.

She added that they have requested a copy of the documents submitted during the inquest proceeding but it was denied.

After more than a week without news on the status of her partner’s case, Zapata filed a Petition for Writ of Habeas Corpus before the Supreme Court on Dec. 18, 2020.

A habeas corpus is a legal action through which a person can seek relief from unlawful detention.

On Dec. 23, 2020, the city prosecutor issued a resolution recommending the filing of a case for violation of Republic Act 10591 or illegal possession of firearms and ammunition. Velasco immediately posted bail and issued a release order.

Then, on Jan. 7, 2021, the high court ordered the Quezon City Regional Trial Court Branch 80 to hear the habeas corpus petition.

After complying with the submission of documents from both parties–a copy of Velasco’s release order and the police’s return of the writ plus filing of a charge for illegal possession of explosives which is non-bailable, the lower court refused to order Velasco’s release by denying the habeas corpus petition.

The lower court said it “is constrained to deny the instant petition since Dennise is now subject to lawful process with the filing of criminal charges against him. The remedies available to Dennise now no longer include the instant special proceedings.”

In taking the case to the Supreme Court through a petition for review, Zapata said the case is not “moot and academic.”

“It must be underscored that the purpose of the writ of habeas corpus is to look into the validity of the detention of the person whose liberty is alleged to be restrained,” read the petition.

“The inquiry should not be limited to the determination of whether or not the detention of a person is the result of a valid legal process. Again, the court’s jurisdiction covers as well the adjudication of questions pertaining to the circumstances of the arrest of the cause of action,” it added.

Petitioner added that the police have informed the lower court that a case for illegal possession of explosives has been filed in court which is non-bailable.

However, no information was provided if a warrant of arrest has been issued against Velasco.

“An information (charge sheet) is not a warrant of arrest or a commitment order. Without making an inquiry into the facts that led to and are intrinsic to such information, i.e. the circumstances of the warrant of arrest, there is no way for the habeas corpus court to know whether it is proper and lawful to order the continuing detention of the person deprived of liberty,”  the petition further stated.

Zapata maintained that Velasco’s right has been violated after he was arrested without a warrant.

Velasco was among the seven individuals arrested on Human Rights Day.

Aside from Velasco, five other union organizers were arrested as well as journalist Lady Ann Salem.

The case against Salem and unionist Rodrigo Esparado has been dismissed by the lower courts but both are still detained.