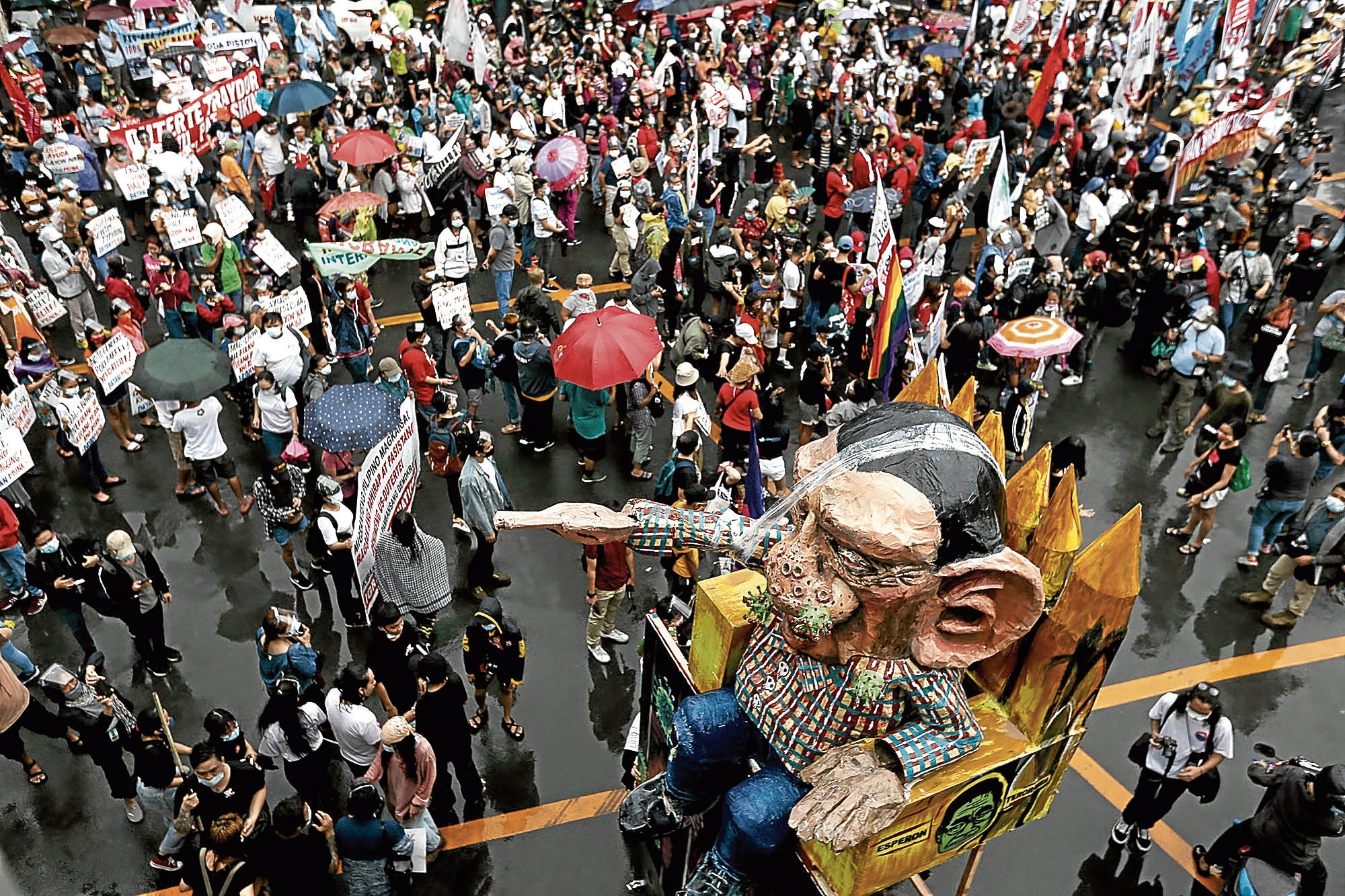 MANILA, Philippines — A female journalist and six union organizers were arrested on charges of illegal possession of firearms and explosives in a series of police operations at dawn on Thursday that drew condemnation from militant groups as the nation marked International Human Rights Day.

Their associates had earlier expressed concern that they were “abducted” by policemen.

The police missions were “in compliance with the directive of the Director [of] CIDG, (Police Maj. Gen. Joel Napoleon Coronel) of intensifying police operations against loose firearms and criminal gangs,” Bruno said.

The seven suspects are to be charged with violation of the Comprehensive Firearms and Ammunition Regulation Law (Republic Act No. 10591) and the Illegal Possession of Explosives Law (RA 9516).

Their arrests have prompted concern and outrage over the conduct of police operations on the heels of the arrest of other activists and labor leaders earlier.

On Dec. 2, peasant organizer Amanda Socorro Echanis was taken in Cagayan province and detained with her month-old child. Two days later, police collared labor leader Jose Bernardino, whom they claimed to be a ranking member of the communist New People’s Army, in Pampanga province.

Velasco, a trade union organizer for Defend Jobs Philippines, was arrested at his home in Barangay Lagro, Quezon City, on what his group said were “trumped-up charges” of illegal possession of firearms and explosives.

According to his partner, Diane Zapata, the policemen made them lie on the floor. She later posted “Help!!!’ RAid at house now!!!” on social media, updating with a two-minute video recording of CIDG agents conducting their search.

Remarks by Zapata in the video suggest that weapons had been planted at their home.

Zapata said the police took Velasco with them when they left.

When she asked where they were taking him, “They told me they needed to bring [him] in for a swab test, and then they left me,” she said in another video on Facebook.

“I drove along the entire stretch of Commonwealth (Avenue) looking at places where [they] could have possibly brought him,” she said. “I don’t know where he is right now, it’s Human Rights Day.”

Later in the day, Defend Jobs was able to locate Velasco at Camp Karingal, where he is currently detained.

The group said his arrest “follows the reported surveillance of our head office in Quezon City on the night of Dec. 3.”

“We cry foul over Velasco’s arrest being done in time [for] Human Rights Day,” the group said. “We slam the planting of … firearms and explosives [in] Velasco’s possession as evidence.”

Salem and Esparago were arrested in their condominium in Mandaluyong City. Her arrest also raised suspicions from her media associates that she was kidnapped by authorities, while Esparago’s arrest, on the other hand, was not immediately reported. It was not clear from the initial police updates how the two were related.

Only later in the day did family and colleagues learn that Salem was in the CIDG’s custody.

The National Union of Journalists of the Philippines demanded her release as it expressed outrage at her arrest on International Human Rights Day.

The People’s Alternative Media Network (Altermidya) said her “abduction … was another proof of the dangers of the administration’s vile practice of Red-tagging.”

At a recent Senate hearing on Red-tagging, the National Task Force to End Local Communist Armed Conflict linked “Manila Today,” the news site where Salem is editor, to the communist movement.

Astudillo, Cruz, and Gregorio were arrested in a condominium in Quezon City. Police claimed to have recovered five grenades, three .45-caliber pistols, two .9mm pistols, one .38-caliber revolver, and several rounds of ammunition.

Demate was arrested at his home in Manila. Recovered from him were a .45-caliber pistol, an M16 and a magazine, a grenade, 29 rounds of 5.56mm ammunition, and seven rounds of .45-caliber ammunition.

The warrants for the arrest of Velasco, Salem, and the others were all issued by Executive Judge Cecilyn E. Burgos-Villavert of Regional Trial Court Branch 89 in Quezon City.

Last year, Villavert issued four warrants for police raids on the homes and offices of several activists, which led to the arrest of more than 60 of them.

Defend Jobs said Velasco’s arrest followed a similar pattern in the arrests of the other activists.

Human rights groups marched to Malacañang on International Human Rights Day and warned that President Rodrigo Duterte may increase his attacks on activists.

Duterte “seems to be gearing up for a more brutal assault on people’s rights and dissent with the passage of his terror law,” said Karapatan secretary general Cristina Palabay, referring to the Anti-Terror Law of 2020 enacted in July and currently being challenged in the Supreme Court. —WITH A REPORT FROM NESTOR CORRALES