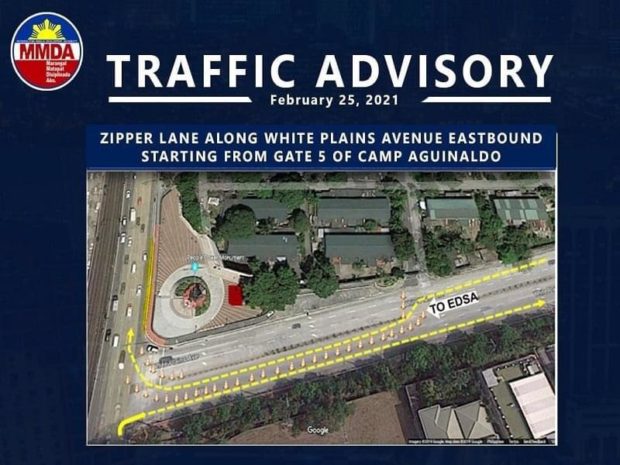 The Metropolitan Manila Development Authority will open a zipper lane along the eastbound direction of the White Plains Avenue in Quezon City on Thursday, February 25, 2021, for the commemoration of the 35th Edsa People Power Revolution. (Courtesy of MMDA)

MANILA, Philippines — The Metropolitan Manila Development Authority (MMDA) will open a zipper lane along the eastbound direction of the White Plains Avenue in Quezon City on Thursday for the commemoration of the 35th Edsa People Power Revolution.

The zipper lane or counterflow scheme will be opened in front of Camp Aguinaldo Gate 5 and will accommodate the volume of vehicles going to Edsa, the MMDA said in a statement on Tuesday.

“A simple and short program will be held at the People Power Monument at 8 am but there will be no road closure,” the MMDA said.

According to the agency, plastic barriers and traffic cones will also be installed to guide the motorists on the use of the zipper lane along White Plains and at the sidewalk along Edsa in front of the People Power Monument.

The MMDA added it will also deploy traffic marshals to manage the traffic flow along the White Plains and other areas of concern as early as 4 a.m.

Road clearing operations will likewise be conducted to remove vehicles illegally-parked at the areas of concern, including the Temple Drive and Edsa Shrine.