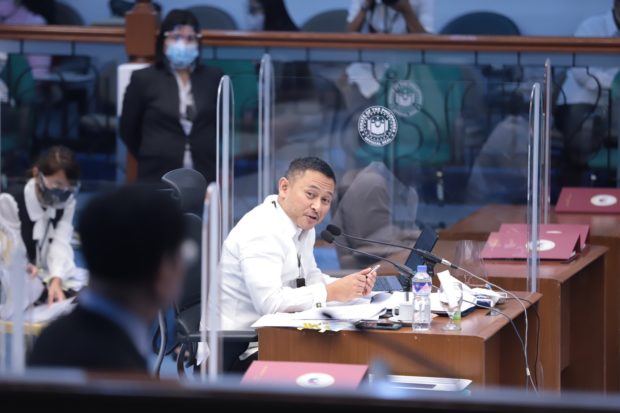 ANGARA DEFENDS BILL EXPEDITING VACCINE PROCUREMENT:  Sen. Sonny Angara, chairman of the Committee on Finance, answers questions from colleagues during the hybrid plenary session Monday, February 22, 2021, as he defends Senate Bill No. (SBN) 2057, a measure seeking to expedite the procurement and administration of vaccines for the protection against COVID-19. (Henzberg Austria/Senate PRIB)

MANILA, Philippines — Some 1.5 million doses of China’s Sinovac vaccine being procured by the government are expected to be delivered to the country before the end of March, senators learned Monday.

This is on top of the 600,000 Sinovac doses donated by China and which are set to arrive in the country this week.

During plenary deliberations on the proposed Covid-19 Vaccination Program Act of 2021, Senator Nancy Binay inquired on the date of the signing of a supply agreement with Sinovac following its recent approval of an emergency use authorization (EUA) from the Food and Drug Administration (FDA).

“It’s around two weeks from now is the answer I’m given,” Senator Sonny Angara, sponsor of the bill, told his colleagues after conferring with the government officials, including vaccine czar Carlito Galvez Jr., who are present in the session hall.

Binay then asked when the Sinovac vaccine doses can be delivered after the signing of the supply agreement.

In response, Angara said he was told that the vaccine maker “can deliver in March the 1.5 million that we mentioned in earlier interpellations.”

The FDA recently approved the EUA of the vaccine developed by Sinovac, the third vaccine maker to receive such an authorization in the Philippines.

However, the FDA said it does not recommend it to be administered on healthcare workers and senior citizens, who are the top priority population for the government’s vaccination program.

FDA Director General Eric Domingo explained that the efficacy rate of Sinovac’s vaccine on healthcare workers stands at 50.4%, which makes it not the best vaccine to be given to medical frontliners who are exposed to Covid-19 patients.

The Sinovac vaccine should also only be administered to clinically healthy individuals aged 18 to 59 years old, making it not suitable for senior citizens.