Auring expected to make landfall in E. Samar; Signal No. 1 in 17 areas — Pagasa 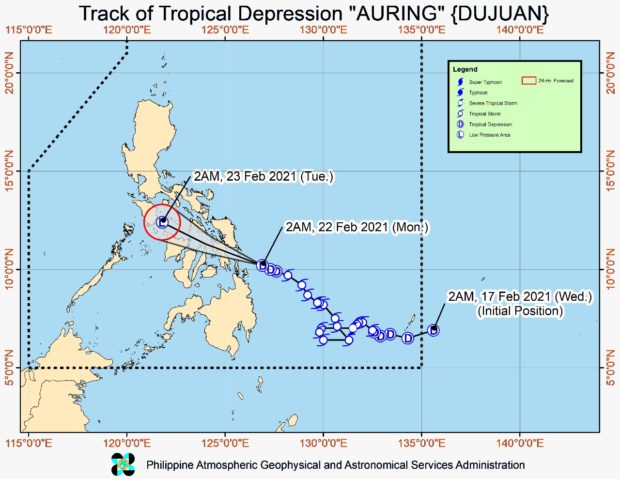 MANILA, Philippines — Seventeen areas remain under Tropical Cyclone Wind Signal (TCWS) No. 1 on Monday morning as Tropical Depression Auring veered north-northwest and is forecast to make landfall over Eastern Samar within the next six to 12 hours, the Philippine Atmospheric, Geophysical and Astronomical Services Administration (Pagasa) said.

The eye or center of Auring was last spotted 205 km east-northeast of Maasin City, Southern Leyte or 85 km east of Guiuan, Eastern Samar, according to the severe weather bulletin issued by Pagasa at 8 a.m.

The weather disturbance is moving at 20 kilometers per hour (kph) and has maximum sustained winds of 45 kph near the center and gustiness of up to 55 kph.

Areas under TCWS No. 1, where winds of 30 to 60 kph may be expected for at least 36 hours along with intermittent rains within 36 hours, is raised in the following areas:

– Masbate including Ticao and Burias Islands

Pagasa said moderate to heavy rains are expected in the Bicol region, Northern Samar, Samar, Eastern Samar, Biliran, Leyte, Marinduque, Romblon, and Quezon, while light to moderate with at times heavy rains may prevail over Aurora and the rest of Visayas, Mimaropa and Calabarzon on Monday.

“Under these conditions, isolated to scattered flooding (including flash floods) and rain-induced landslides are still likely during heavy or prolonged rainfall especially in areas that are highly or very highly susceptible to these hazards as identified in hazard maps and in localities that received significant rainfall over the past couple of days,” Pagasa warned.

“Adjacent or nearby areas may also experience flooding in the absence of such rainfall occurrence due to surface runoff or swelling of river channels,” the weather bureau added.

Pagasa also said that in the next 24 hours, the combined effects of the northeast monsoon and Auring will bring “strong breeze conditions with occasionally higher gusts” over areas where TCWS No. 1 is in effect, as well as over Aurora, Quezon, Marinduque, Romblon, Oriental Mindoro, Batanes, Babuyan Islands, the northern portions of Ilocos Norte and mainland Cagayan, Cuyo Islands, Cagayancillo Islands, and the rest of Visayas and Bicol Region.

Pagasa earlier said that the tropical depression continues to weaken.