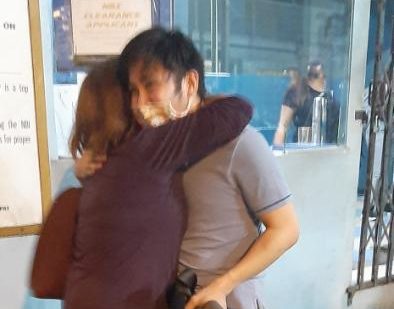 (FILE) Teacher Ronnel Mas received a hug from his mother Vida after an Olongapo court orders his release from detention. Photo from ACT Teachers Partylist

MANILA, Philippines — A Zambales acting provincial prosecutor has dismissed the complaint of inciting to sedition that was refiled by the National Bureau of Investigation (NBI) against public school teacher Ronnel Mas, who was arrested in 2020 over his social media post that offered a P50 million bounty to anyone who can kill President Rodrigo Duterte.

In a resolution dated Feb. 16, 2021, but was sent to reporters on Saturday, Acting Provincial Prosecutor Jose Theodoro Leonardo Santos dismissed the case for “lack of probable cause” after the NBI failed to secure a witness to prove that it was Mas who posted the tweet.

The prosecutor said the social media post was not “authenticated and verified.”

“The resolution must stand that the complainant failed to prove the identity of the perpetrator. The case is covered by the Rules on Electronic Evidence,” read the resolution.

Santos added that the NBI also failed to present other evidence that could be used to prosecute Mas.

FLAG lawyer Dino de Leon, Mas’ lawyer, said the dismissal of the case against his client showed that even ordinary people can stand up against human rights violations.

“The enablers of atrocities of this regime can only go so far, for so long as there are people who will stand up for the rule of law. Indeed, what this decision shows that ordinary people like teacher Ronnel can push back and can stand up against oppression, injustice, and violations of human rights,” said De Leon.

In June last year, Judge Richard Paradeza of Olongapo RTC Branch 72 granted the motion filed by Mas to quash the charge against him.

NBI agents arrested Mas in his house in Sta. Cruz, Zambales province, on May 11 last year and charged him with inciting to sedition related to cybercrime. He was detained in Manila for a week and was released after posting a P72,000-bail.

Mas later apologized for his tweet, saying it was just a joke.

The judge granted the motion of Mas’ lawyers who questioned the legality of his arrest. According to Paradeza, the NBI “inadvertently committed some lapses along the way [that were] detrimental to the constitutional rights of the accused.