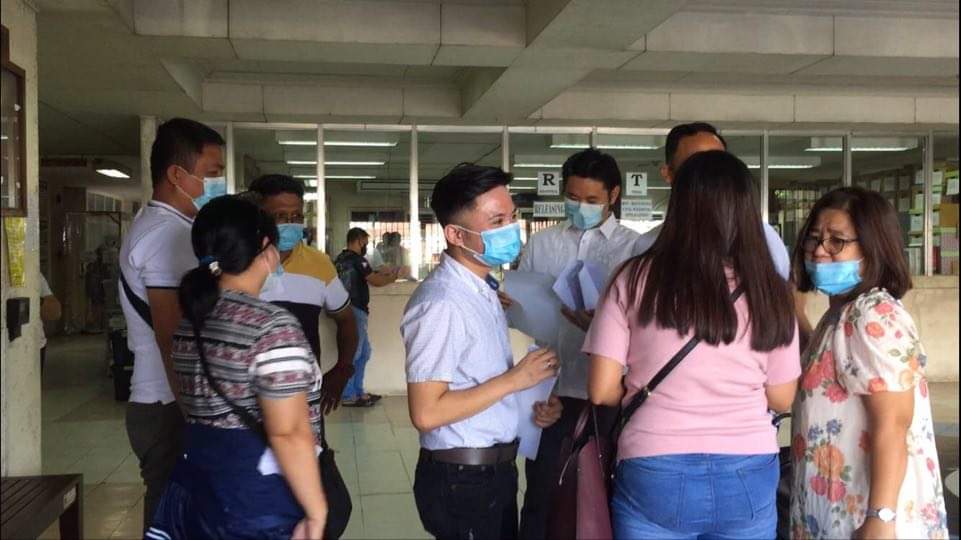 Ronnel Mas (center), 25, emerges from the courtroom after Judge Richard Paradeza of Regional Trial Court Branch 72 dismisses the charges against him. (Photo by Joanna Rose Aglibot)

MANILA, Philippines–The Olongapo City Regional Trial Court has dismissed the case lodged against Ronnel Mas, a public school teacher who was arrested after posting on social media a P50-million bounty to anyone who can kill President Rodrigo Duterte.

In a 15-page decision, Olongapo City RTC Branch 72 Judge Richard Paradeza has granted Mas’ motion to quash on the ground that it has not acquired jurisdiction over Mas because the warrantless arrest made by the National Bureau of Investigation is invalid.

A motion to quash is filed by an accused before arraignment. He challenges Information or charge sheet for defects apparent at face value. If granted, the case against the accused is dismissed. 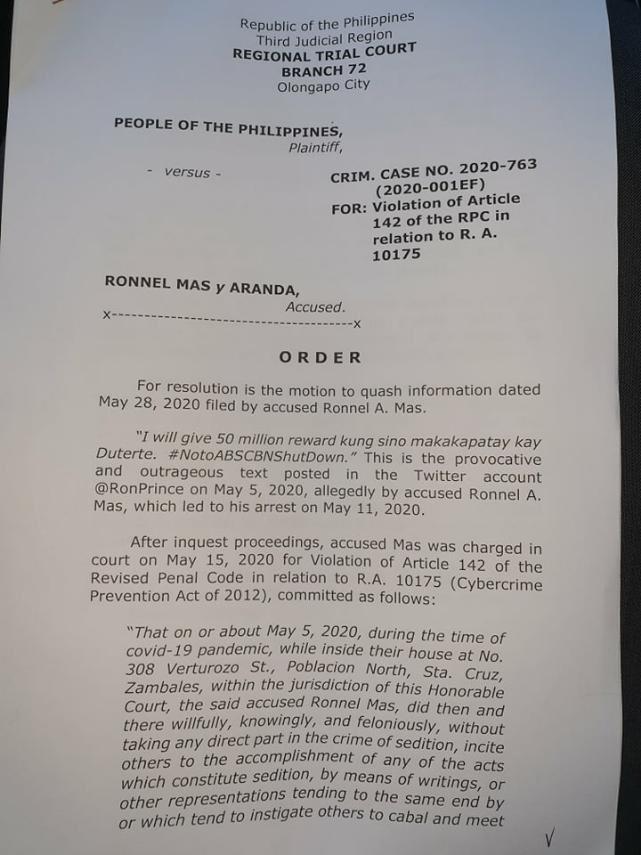 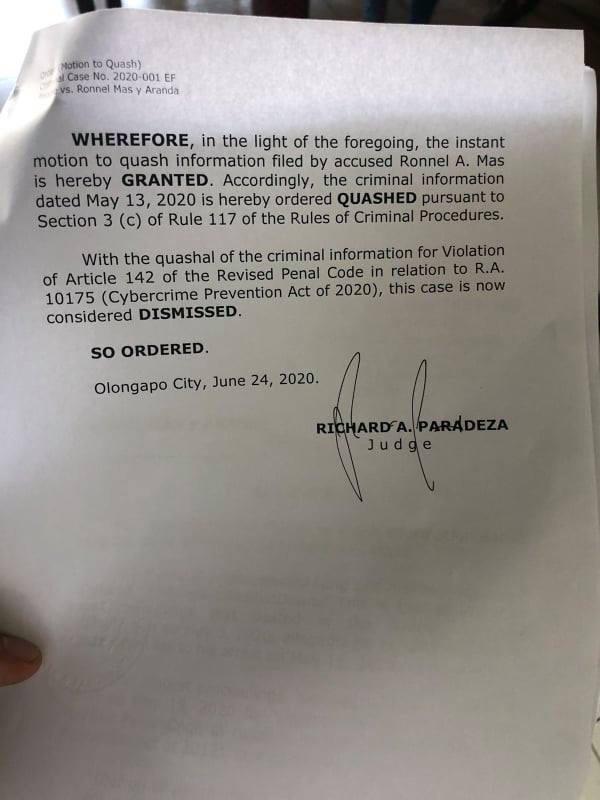 “Considering that accused Mas had timely raised objection to the legality of his arrest before arraignment, and with the findings of this court that accused Mas was indeed unlawfully arrested, this court failed to acquire jurisdiction over his person,” the court said.

The Court said the NBI “inadvertently committed some lapses along the way, detrimental to the constitutional rights of the accused.”

The Court said the post made by a certain @RonPrince_  that offered P50-million is “despicable and provocative” because it undermines lawful authorities and disturbs peace and order.

“The author/s of the said post should be made liable and punished to the fullest extent of the law,” said the court adding that the NBI’s immediate response is also “laudable and commendable.”

However, the court said the NBI should have observed the rules and respect the constitutional rights of the person suspected of posting the bounty offer.

“Even the worst criminals have constitutional rights too,” said the court.

According to the court, the NBI used as basis in arresting Mas the affidavit of a sole witness identifying Mas as the owner of the @RonPrince Twitter account.

The witness said he learned of the social media post of Mas after his brother-in-law showed him Mas’ photo and asked if Mas is related to his “kumare.”

From there, the NBI has managed to locate Mas at his place in Dagupan where he voluntarily surrendered which the court noted was not doing anything unlawful at the time of the arrest.

The court added that even the affidavit of the witness did not indicate any certainty that Mas is the owner of the @RonPrince account.

“It is crystal clear that when NBI operatives arrested accused who was not committing any criminal act that time, the operatives already violated the right of the accused against illegal arrest,” said the court.

“It is thus safe to conclude that the arrest of accused Mas is unlawful, and evidence gathered as a consequence of said unlawful arrest is inadmissible in evidence,” it added.

After his arrest, while on his way to Manila, inside the vehicle, the NBI interviewed him and asked why he made such an offer via social media.

The questioning was posted on Facebook and generated 960 reactions, 611 comments, and 856 shares.

The NBI operative asked Mas: “Would you like to apologize to the president and the people. You are asking an apology?”

[I am sorry Mr. President that I wrote that tweet. It is not my intention [to have you killed.]

In Manila, he repeated his confession and apology after the NBI asked him questions before members of the media.

Initially, a resolution issued by inquest prosecutors ruled that the NBI’s warrantless arrest of Mas was invalid but a review by prosecutors from the Department of Justice said the invalid warrantless arrest was “ultimately cured” because of an interview he gave to the media wherein he admitted he was the one who posted the tweet.

But the Olongapo Court said the supposed extra-judicial admission made by Mas was not included in the records submitted to them.

An extra-judicial confession, to be valid, the court explained that it should conform to constitutional requirements–right to remain silent, to have independent and competent counsel of their own choice or to be provided one if they cannot secure the service of one, to have a counsel present if the accused decide to waive his rights.

The authorities should also submit to the court the affidavit of the person who interviewed the accused.

“Unfortunately, this was not done, as said document is not available in the case. Absent of said affidavit, alternatively, the video clippings of the interview where the accused made the alleged extra-judicial admission certified authenthic should have been submitted. Sadly, no video clipping of the interview was made part of the record of the case,” said the court. With report from  Joanna Rose Aglibot, Inquirer Central Luzon