Signal No. 1 up in some Davao Region towns as Auring intensifies, stays longer above seas | Inquirer News
Close
menu
search

Signal No. 1 up in some Davao Region towns as Auring intensifies, stays longer above seas 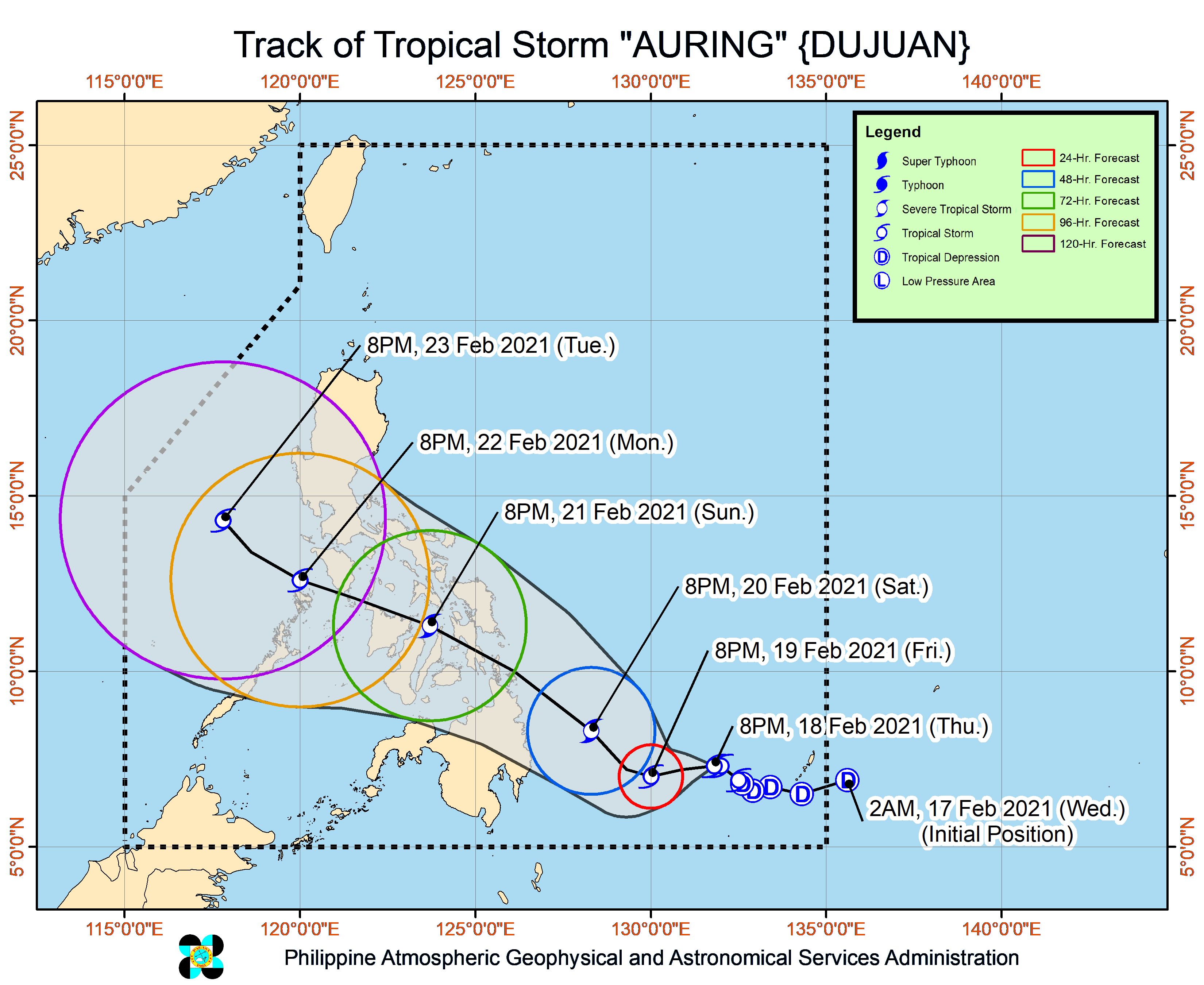 Pagasa said in its latest severe weather bulletin as of Thursday night that Auring was packing maximum sustained winds of 75 kilometers per hour (kph) near the center, and gustiness of up to 90 kph.

According to the weather bureau, Signal No. 1 has been raised Davao Oriental and Davao de Oro in anticipation of the strong winds from the cyclone, which may range from strong breeze to near-gale force winds.

But as of now, no strong winds are being felt over the provinces under a wind signal warning, as it is more of a warning to residents about the winds that may affect them in the next 36 hours.

“More localities in Caraga and Davao Region may be placed under TCWS #1 in the next bulletin. Based on current meteorological data, the highest level of wind signal that will be issued throughout the passage of ‘Auring’ is TCWS #2 (for potentially damaging gale-force to storm-force winds),” Pagasa said.

Latest satellite images showed that Auring was last seen 605 kilometers east of Hinatuan, Surigao del Sur as of 10:00 p.m. — which means it inched closer to Hinatuan by just around 40 kilometers from 4:00 p.m of Thursday.

It is seen to stay over waters east of Mindanao for a longer time — until Saturday night — which may boost Auring’s strength, as Pagasa still predicts a severe tropical storm scenario in the next 48 hours.

Forecast track showed that Auring would move west until Friday night; after that, it would make a northwest nudge, which may result in Auring hitting the northern tip of Caraga Region by Sunday.

By Sunday night, it would have crossed the landmass of Cebu province, proceeding to the north of the Panay province before moving between waters of northern Palawan and western Mindoro on Monday night.

Despite spending a longer time above seas and potentially crossing waters in its track, Pagasa said that a typhoon scenario remains less likely.

During the same period, light to moderate rains with at times heavy rains on the other hand may prevail in Central Visayas, the rest of Northern Mindanao, Northern Samar, Lanao del Sur, Cotabato, and Davao City.

Pagasa again warned that flash floods and landslides are possible in low-lying areas and those near mountain slopes, especially if rains have occurred in these areas in the past few days.

The gale warning place for the country’s entire eastern coast is still in place, which means sea travel is temporarily banned as of now.

The gale warning also extends to Luzon’s northern and western waters — from Cagayan including Babuyan Islands, Batanes, Ilocos Region, and down to Central Luzon.