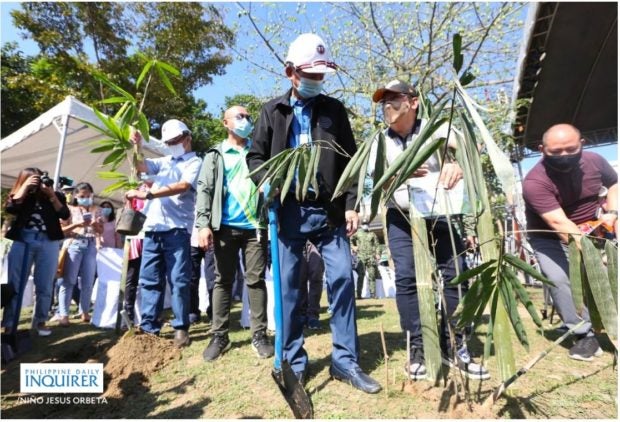 MANILA, Philippines — The dredging operations being done on Marikina River has revealed that an area as vast as 27 hectares had been reclaimed from the river without necessary permits, the city’s local government unit said Wednesday.

According to a statement from Marikina City’s Public Information Office (PIO) on Wednesday, the Department of Environment and Natural Resources (DENR) found out that there were 25 lot parcels that are either partially or completely encroaching on the Marikina River.

The dredging activity is one of the initiatives launched by the local government, DENR, and the Metropolitan Manila Development Authority (MMDA) in an effort to restore the old glory of Marikina River, and allow floodwaters to flow freely again along its stretch before waters go down to the Manggahan floodway.

“Based on existing land records, the DENR found out that 25 lot parcels with a total area of 27 hectares (271,625 square meters) were reclaimed without necessary permits, either partially or completely encroaching into the Marikina River,” the Marikina PIO said.

“The said portions of the river have been illegally reclaimed, reducing drastically the ability of the waterway to contain excess rainwater during typhoons, DENR noted, adding that the structures have been found violating Presidential Decree 1067 or the Philippine Water Code,” it added.

Earlier, Marikina Mayor Marcelino Teodoro, DENR Secretary Roy Cimatu, and MMDA Chairperson Benhur Abalos Jr., and other officials from the Department of Public Works and Highways (DPWH) inspected a dredging operation in one of the identified areas in Marikina’s Barangay Olandes. 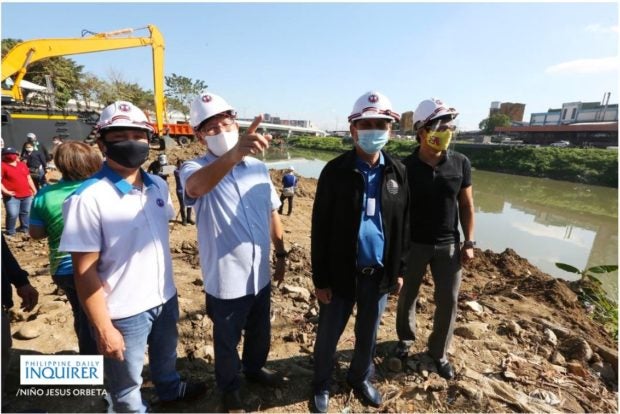 Teodoro said that the dredging activity is necessary for the river to achieve DPWH’s water velocity goal of at least four (4) meters per second — which would prevent flooding in low-lying areas and communities near the river.

“Dredging will be done to widen the river, to deepen it, to get the correct ratio of the widening and the deepening of the river in order to improve the water carrying capacity of the Marikina River, and thus improving its water current velocity,” the mayor said.

“Being a downstream river, a catch basin, a valley, it is natural that Marikina will be flooded, but the idea really is to mitigate through this activity by widening and deepening the water channel,” he added.

Just like the effects of “Ondoy,” Typhoon Ulysses’ flood waters took several weeks to recede in some communities, particularly in Provident Village, prompting the local government to suspend classes and declare a state of calamity.

While Ulysses was the last in a series of strong cyclones within a month’s time — including Typhoon Quinta and Super Typhoon Rolly — a lot of the blame was placed on the Marikina River’s tendency to overflow quickly, and human activities that have degraded the river’s watershed.

This is not the first time Marikina’s local government opened up the issue of dredging the river.  Last November 23, Teodoro told the Philippine Daily Inquirer that he would file an administrative complaint against BF Corp. for allegedly pursuing a reclamation project without an environmental compliance certificate (ECC) from DENR.

Regarding the dredging operations, Teodoro assured Marikina residents that the local government will procure other equipment to make the dredging activities faster.

“As what we have been emphasizing, this is not simply a dredging activity on the part of the DPWH, but this is a Marikina River restoration activity, which will not be done only today or in the next 65 days but will be a sustainable activity,“ Teodoro said.

“We have discussed yesterday in the office of secretary that the local government is also acquiring some heavy equipment, dredgers, that can be used to continue the dredging activity,” he added.