Lacson fires back at Duterte: Senate has say in VFA 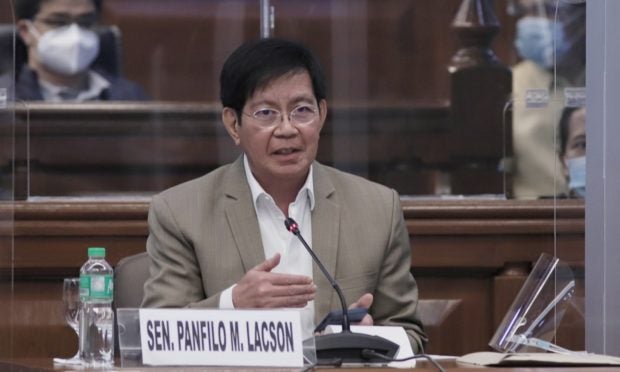 MANILA, Philippines — Senators have a say in the Visiting Forces Agreement (VFA), Sen. Panfilo Lacson said on Tuesday, after being told by President Rodrigo Duterte that he had “nothing to do” with how the government handled negotiations to keep or scrap the controversial defense deal with the United States.

“Mr. President, read the 1987 Constitution. A senator has something to do with international agreements,” Lacson told Duterte in a post on Twitter.

Lacson cited Section 12 of Article 7 of the Constitution, which states that “[n]o treaty or international agreement shall be valid and effective unless concurred in by at least two-thirds of all the members of the Senate.”

He also mentioned a resolution filed by 14 senators, including himself, maintaining that the same two-thirds vote to ratify an international agreement is needed to terminate the accord.

“That said, there is a pending petition in the [Supreme Court] in this regard and the issue has not been settled. All the more that as a senator, I have something to do with the President’s threat to terminate the VFA if the US does not pay up,” Lacson said in a separate message to reporters.

He said every Filipino citizen was free to express disappointment at Duterte’s “harsh, undiplomatic remarks” about bilateral agreements such as the VFA.

“Not anyone, even he ( Duterte), can curtail that basic right,” Lacson said.

Lacson was responding to Duterte’s outburst in a televised speech on Monday night over criticism of his demand that the United States increase the Philippines’ share of US military aid to $16 billion, comparable to the counterterrorism assistance it poured into Pakistan from 2001 to 2017.

“Dear Sam . . . Just to clarify, please be informed that we are not a nation of extortionists; and more so we are not greedy. Err . . . not all,” Lacson said in a tweet on Saturday, which has since been deleted, in reaction to Duterte’s demand.

“Senators have no function at all in the matter of agreements here. It is vested in the President, and it does not need any concurrence from Congress,” Duterte said in his speech late Monday.

Signed in 1998, the VFA allows US forces to come to the Philippines for joint exercises with Filipino troops. Duterte ordered the agreement abrogated last year, but suspended action because of the coronavirus pandemic and “heightened superpower tensions.”

Duterte said the power to abrogate the VFA rested solely with the President.

“I may accept your comments, but please use a language that will promote your person or human being,” Duterte said, adding that Lacson had been posting comments on social media “without really finding out whether [he is] a part of it or not.”

In his response on Tuesday, Lacson said the Constitution gives the senators a say in the Philippines’ international agreements, such as the VFA, “especially if these affect the country’s long-term national interest and security.”

“I may not be a lawyer like the President. But last time I read the Constitution, a senator has something to do with international agreements,” said Lacson, head of the Senate committee on national defense.

Noting that Lacson had deleted his tweet, Duterte directed much of his ire at Vice President Leni Robredo, who said on Sunday that the President’s remarks could be misconstrued as extortion.

“It’s embarrassing,” Robredo said in her weekly radio show. “It’s like extortion. [It’s like we’re crooks] — if you want this, pay up.”

‘America owes us a lot’

“How can you say extortion? America owes us a lot. It has not paid us, and then you will say extortion?” Duterte responded on Monday night.

“How can that be extortion when you’re asking for a payment? Extortion? You’re asking payment for your country, that’s extortion?” he said.

The Philippines should be provided with arms that would place it on equal footing with other countries, he said.

But the United States had given the Philippines nothing, he said, adding that US troops would bring weapons and equipment to the Philippines for war games but take these home after the exercises.

He said the United States had a lot of arms stored in the Philippines, it was close to having a military base in the country.

“And do you know that they are slowly converting Subic into an American base?” Duterte said.

The United States will make the Philippines a military outpost and if it goes to war, the country will be dragged into the conflict and Palawan will be hit first, he said.

Duterte said Robredo knew nothing about US activities in the Philippines so she should not speak about these.

He said that being a lawyer, Robredo should be aware that foreign policy rested with the President.

“Every time she opens her mouth, she really forgets that she’s a lawyer, and being a lawyer she should know that the Constitution says that that is my function. It is not their function,” he said.

“So you, Ma’am, I’m sorry to say, you are not really qualified to run for President. You do not know your role in this government,” he said.

Responding on Tuesday, Barry Gutierrez, spokesperson for Robredo, said the Vice Presiden’s record “speaks for itself.”

“It’s been obvious since Day 1 that Robredo is ready,” Gutierrez said in a radio interview.

Gutierrez lamented Duterte’s language, saying it was “sad that we keep circling back to such rhetoric whenever the Vice President attempts to give suggestions.”

Whenever Robredo responds to issues, she is attacked, he said.

“[They] always respond like that. Instead of trying to meet us at the level at which the issue is supposed to be discussed, we are only met with badmouthing and criticism,” Gutierrez said.