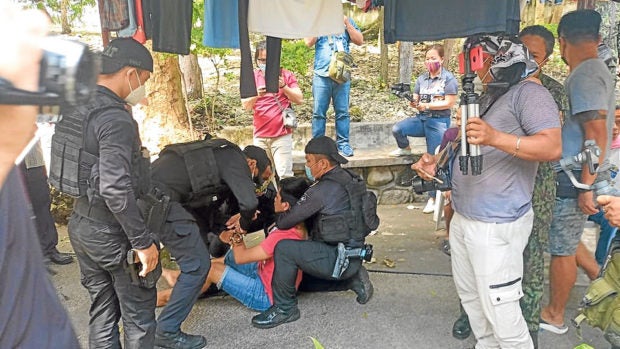 MONDAY RAID Policemen in full battle gear subdue and cuff a man at the University of San Carlos retreat house in Cebu City, where they also arrested two volunteer teachers, five “lumad” teachers, and 19 Manobo minors who they claimed they were rescuing from communist “indoctrination and recruitment.” —NESTLE SEMILLA

MANILA, Philippines — The Commission on Human Rights (CHR) is investigating the police “rescue” of 19 Manobo children from the University of San Carlos (USC) retreat house in Cebu City, which rights and indigenous groups say was a pretext for a raid.

The CHR’s action followed calls by lawmakers for an independent probe into Monday’s supposed rescue operation on the USC campus in Barangay Talamban, which saw several children and teachers screaming as they were dragged out of a room and handcuffed by police officers.

Nineteen minors, two volunteer teachers and five “lumad” (indigenous) leaders were taken by the police, according to Save Our Schools Network (SOSN), which is composed of nongovernmental organizations and other groups advocating for children’s right to education.

“Given the different claims involving the incident, our interest is to pin down the truth and look forward to the cooperation of all parties involved,” said CHR spokesperson Jacqueline de Guia.

Police said they launched the operation after six parents from Talaingod, Davao del Norte province, sought their help, claiming that their children were being recruited to become armed combatants.

According to SOSN, the 19 Manobo minors fled their homes in Davao del Norte because of harassment after the lumad were tagged as communists by the military, and went to Cebu City to continue their education.

SOSN claimed that the minors’ parents had authorized the volunteer teachers in notarized copies to allow the children to join the “bakwit” (evacuees) school, a learning center for evacuees in areas with heavy military presence in Mindanao.

The minors were placed in the custody of the Department of Social Welfare and Development.

The teachers—Chad Ramirez Booc, 27, and Roshelle Mae Porcadilla, 21—and five lumad leaders would be charged with serious illegal detention, kidnapping and violation of Republic Act No. 9208 or the Anti-Trafficking in Persons Act of 2003, according to Brig. Gen. Ronnie Montejo, police director for Central Visayas.

According to Tug-Ani, the official publication of the University of the Philippines (UP) Cebu, Booc is a UP Diliman graduate who volunteered for the lumad school Alcadev and is one of the 26 petitioners against the Anti-Terrorism Act of 2020 in the Supreme Court.

Montejo said the minors had been staying in USC’s retreat house since 2018, away from their parents, to undergo “indoctrination and recruitment” by a communist group and join rallies against the government.

He said the minors were supposed to be taken to Davao City to study in 2018.

Their parents, however, became worried because their children had not returned home since, he added.

SOSN uploaded on Facebook a video of the supposed “rescue operation” showing the lumad students and teachers screaming as they were dragged out of the retreat house and handcuffed by police officers.

In a statement, the Society of the Divine Word (Societas Verbi Divini or SVD) said the presence of lumad on campus was in response to a call of the Archdiocese of Cebu’s Commission on Social Advocacies to have a school program for evacuees there.

“There’s no need for a rescue operation because the presence of lumad in the retreat house was for their welfare and well-being, and all throughout, they were nurtured, cared for and treated with their best interest in mind,” the priests said.

They said the SVD hosted a delegation of 42 students accompanied by five teachers and three community elders at the SVD-owned retreat house on March 11, 2020. Four other educational institutions in Cebu hosted them earlier.