U.S. Senate acquits Trump as Republicans save him in impeachment again 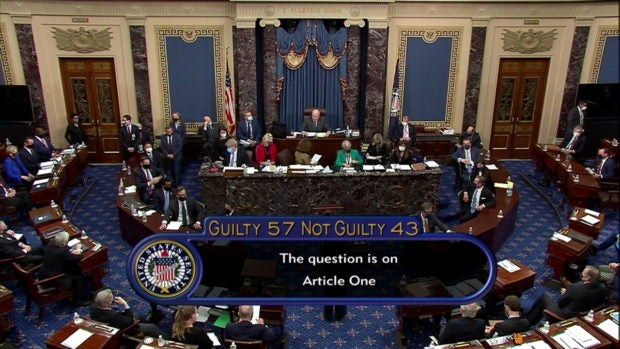 The U.S. Senate votes to acquit former U.S. President Donald Trump by a vote of 57 guilty to 43 not guilty, short of the 2/3s majority needed to convict, during the fifth day of the impeachment trial of the former president on charges of inciting the deadly attack on the U.S. Capitol, on Capitol Hill in Washington, U.S., February 13, 2021. U.S. Senate TV/Handout via Reuters

WASHINGTON  – The U.S. Senate acquitted Donald Trump on Saturday in his second impeachment trial in a year, with fellow Republicans blocking conviction over the former president’s role in the deadly assault by his supporters on the U.S. Capitol.

The Senate vote of 57-43 fell short of the two-thirds majority needed to convict Trump on a charge of incitement of insurrection after a five-day trial in the same building ransacked by his followers on Jan. 6 shortly after they heard him deliver an incendiary speech.

In the vote, seven of the 50 Senate Republicans joined the chamber’s unified Democrats in favoring conviction.

Trump left office on Jan. 20, so impeachment could not be used to remove him from power.

But Democrats had hoped to secure a conviction to hold him responsible for a siege that left five people including a police officer dead and to set the stage for a vote to bar him from ever serving in public office again.

Given the chance to hold office in the future, they argued, Trump would not hesitate to encourage political violence again.

Trump’s attorneys argued that his words at the rally were protected by his constitutional right to free speech and said he was not given due process in the proceedings.

Republicans saved Trump in the Feb. 5, 2020, vote in his first impeachment trial, when only one senator from their ranks – Mitt Romney – voted to convict and remove him from office.

Senate Majority Leader Mitch McConnell, who voted “not guilty,” offered scathing remarks about the former president after the verdict.

“There is no question that President Trump is practically and morally responsible for provoking the events of the day,” he said. “The people who stormed this building believed they were acting on the wishes and instructions of their president.”

The drama on the Senate floor unfolded against a backdrop of gaping divisions in a pandemic-weary United States along political, racial, socioeconomic and regional lines.

The trial provided more partisan warfare even as Democratic President Joe Biden, who took office on Jan. 20 after defeating Trump in the November election, called for healing and unity after his predecessor’s four turbulent years in power and a caustic election campaign.

Seventy-one percent of American adults, including nearly half of all Republicans, believe Trump was at least partially responsible for starting the Capitol assault, but only about half of the country thought Trump should be convicted of inciting insurrection, according to an Ipsos poll conducted for Reuters.

Trump, 74, continues to hold a grip on his party with a right-wing populist appeal and “America First” message. The wealthy businessman-turned-politician has considered running for president again in 2024.

But the Senate still has never convicted an impeached president.

Democrats forged ahead with impeachment despite knowing it could overshadow critical early weeks of Biden’s presidency.

The House approved the single article of impeachment against Trump on Jan. 13, with 10 Republicans joining the chamber’s Democratic majority.

That vote came a week after the pro-Trump mob stormed the neoclassical domed Capitol, interrupted the formal congressional certification of Biden’s victory, clashed with an overwhelmed police force, invaded the hallowed House and Senate chambers, and sent lawmakers into hiding for their own safety.

Shortly before the rampage, Trump urged his followers to march on the Capitol, repeated his false claims that the election was stolen from him through widespread voting fraud, and told them that “if you don’t fight like hell, you’re not going to have a country anymore.” 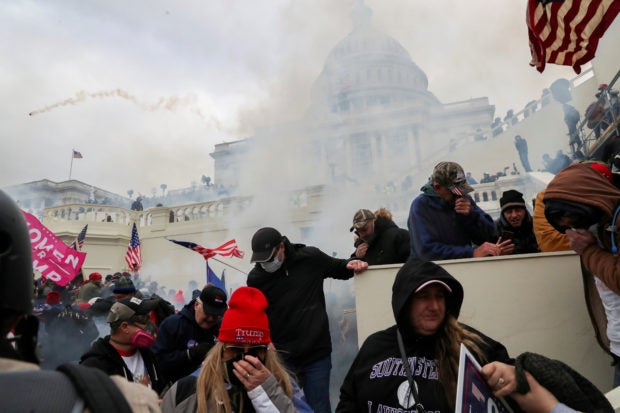 Supporters of U.S. President Donald Trump cover their faces to protect from tear gas during a clash with police officers in front of the U.S. Capitol Building in Washington, U.S., January 6, 2021. REUTERS/Leah Millis/File Photo

During the trial, nine House lawmakers serving as trial managers, or prosecutors, urged senators to convict Trump to hold him accountable for a crime against American democracy and to prevent a repeat in the future.

They played searing video of rioters swarming inside the Capitol and making violent threats toward politicians including House Speaker Nancy Pelosi and then-Vice President Mike Pence.

The House managers said Trump summoned the mob to Washington, gave the crowd its marching orders and then did nothing to stop the ensuing violence.

The defense lawyers accused Democrats not only of trying to silence Trump as a political opponent they feared facing in the future but of attempting to criminalize political speech with which they disagreed and aiming to cancel the voices of the tens of millions of voters who backed him.

Trump’s lawyers argued the trial was unconstitutional because he had already left office. The words Trump used, they argued, were no different than those regularly employed by Democrats.

In his previous impeachment trial, the Senate voted to acquit Trump on two charges – abuse of power and obstruction of Congress.

That impeachment arose from Trump’s 2019 pressure on Ukraine to investigate Biden as he sought foreign aid to sully a domestic political rival.

A common theme in the charges at the heart of the two impeachments was Trump’s abandonment of accepted democratic norms to advance his own political interests.

The U.S. Constitution sets out impeachment as the instrument with which the Congress can remove and bar from future office presidents who commit “treason, bribery or other high crimes and misdemeanors.”

Impeachment, once a rare occurrence, has become more commonplace during America’s era of poisonous political polarization in recent decades. In the 209 years after the first U.S. president, George Washington, took office in 1789, there was only one impeachment.

Richard Nixon resigned in 1974 rather than face impeachment over the Watergate scandal.

Trump’s acquittal does not end the possibility of other congressional action against him such as a censure motion.

Republicans seemed dead set against an idea floated by Democrats of invoking the Constitution’s 14th Amendment provision barring from public office anyone who has “engaged in insurrection or rebellion” against the government.

The impeachment proceedings also can be viewed in the context of a battle for the future of the Republican Party.

Some Republicans – mostly moderates and establishment figures – have voiced alarm at the direction Trump has taken their party.

Detractors have accused Trump – who had never before held public office – of undermining the institutions of democracy, encouraging a cult of personality and pursuing policies built around “white grievance” in a nation with a growing non-white population.