MANILA, Philippines —  When she was just 32 and a rising star in the business process outsourcing company where she works, “Rona” was offered a higher-paying position that would relocate her to its US headquarters.

While she seized every opportunity for career growth coming her way in the past, Rona, now a supervisor at 34, said she had to decline because she was taking care of her mother, a widow with leukemia.

Rona, who is single, and her older brother, who is married, take turns to accompany their mother to chemotherapy.

“I’m thankful I got a stable job so it helps with Mama’s chemo expenses,” she said.

Her father died due to lung cancer almost two decades ago. She could not bear leaving her mother alone, especially in such frail condition.

“Perhaps I made the right decision because I’m mostly working and staying at home with Mama during this scary pandemic. I hope we can all get through this,” she said.

Rona’s mother is lucky her daughter decided to stay and take care of her. But more elderly women in the Philippines face a greater risk of having more difficulties when they get sick in old age as the number of Filipino families providing support to elders is getting smaller, according to a study by the Manila-based Asian Development Bank (ADB).

The ADB paper, “Gender Differences in Access to Health Care Among the Elderly: Evidence from Southeast Asia” published on Feb. 12, noted that “intergenerational transfers from adult children to their older parents have fallen over time in the Philippines and in other Asian countries as children have found it less necessary to provide such support, and older persons have lowered their expectations of receiving such support.”

The authors, ADB deputy chief economist Joseph Zveglich Jr. and Rutgers University professor Yana van der Meulen Rodgers, said this changing behavior among Filipinos, whose culture fosters tightly knit family ties and taking care of the elderly in extended families, was first reported in “Ageing and Health in the Philippines” by the Economic Research Institute for Asean and East Asia (Eria) in 2019.

The ADB paper cited findings from the 2019 Eria study, which said the number of older Filipinos who received financial support from their children fell to 62 percent in the 2018 Longitudinal Study of Ageing and Health in the Philippines from 85 percent in the 2007 Philippine Study of Aging.

Also, Eria said the number of elderly Filipinos who planned to get monetary support from their children declined to 36 percent in 2018 from 40 percent in 2007.

It said, however, that there were “no substantial gender differences in disability” between older men and women.

Rona’s mother, Myra, spent most of her time as mother and wife, taking care of her children and the household. She sometimes sold “PX” goods and hosted Tupperware parties to earn some money in the 1990s, especially when her husband was fighting the Big C.

Mother and daughter agreed to share their story on condition that their real identities are not disclosed.

After her husband died, Myra took informal jobs in their neighborhood like sweeping sidewalks and washing laundry. Her son and daughter, smart as they were, snagged scholarships and later were able to support her financially. 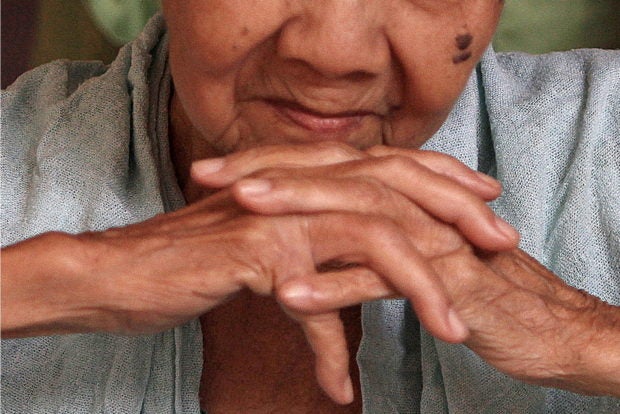 Without a pension, Myra, 62, would have had a hard time in her own battle against leukemia without her children’s help.

The ADB said the Philippines would be an “aging society” with over 10 percent of the population above 60 by 2030.

As a response, the government implemented some measures to protect the health and economic security of the elderly, including the 2019 universal health care law (UHC), the ADB study said.

The UHC guarantees “equitable access” for all Filipinos to quality and affordable health-care services, including medical tests and consultations. It also provides all Filipinos with health insurance under Philippine Health Insurance Corp.

Of that amount, P44.5 billion was spent by those with illnesses considered comorbidities, including immunocompromised diseases like cancer, HIV/AIDS, diabetes, chronic cardiovascular ailments and chronic respiratory illnesses.

About 15.7 percent of current health expenditures were spent by the elderly for the treatment or management of illnesses that are related to severe and critical cases of COVID-19, the PSA said.

Before the UHC, elderly Filipinos relied on their children for old-age support, including health expenses, said the ADB study, which also included Cambodia and Vietnam.

For the ADB, “uncovering the reasons for fairly low take-up of formal health-care services and gender differences in access to care is crucial to designing policies to better meet the needs of older persons in Asia, especially in light of the increased risks of getting sick during the COVID-19 pandemic.”

In its 2019 report, which was often cited in the ADB paper, Eria recommended harmonizing and streamlining the policies under the UHC and the Senior Citizens’ Act of 1992 to put preventive measures on ageing issues at the forefront.

Eria, as quoted by the ADB, said the current policy response was “heavily concentrated on health, predominantly on providing curative services and lessening the burden of health-care cost.”

But it said policies should promote “healthy and active ageing” through programs to prevent chronic illnesses of the elderly that would require long-term care.

Eria also suggested revisiting the country’s pension system to allow the elderly to be financially independent, which would require Filipinos to pay for government pension while they are still economically productive. Including financial literacy in the basic education curriculum would instill long-term planning and financial preparation for old age, it added.

It said women should be encouraged to work and contribute to their own pension to lessen future reliance on their children.

“In the Philippines and Vietnam, having young children is associated with a lower likelihood of seeking treatment, probably due to the time constraints involved in caring for young children,” the ADB said.

It said Filipino and Cambodian women were “more likely to seek treatment than men,” while “the gender difference is reversed in Vietnam where stigma and discrimination associated with some diseases may more strongly deter women.”

In these three countries, “the probability of seeking treatment rises with age more sharply for women than men” although the gender difference was not significant for the elders in the study’s subsamples.

The ADB’s findings on the Philippines were based on demographic and health surveys among more than 27,000 households by the PSA and the global advisory and digital services provider ICF International Inc. in 2017.