MANILA, Philippines — The mayors in the National Capital Region (NCR) are opposing the decision of the COVID-19 response task force to allow the reopening of some indoor leisure establishments, including cinemas and arcades, according to Metro Manila Council (MMC) chair Edwin Olivarez.

Olivarez, who is also mayor of Parañaque City, on Saturday said the mayors had “reservations” about some provisions of the latest resolution of the Inter-Agency Task Force for the Management of Emerging Infectious Diseases (IATF), the temporary government body in charge of responding to the COVID-19 pandemic.

He said these provisions did not go through “proper consultations” with NCR’s local executives.

“Cinemas are enclosed spaces, and you spend more than one hour in an enclosed and air-conditioned area,” Olivarez said in a radio interview to explain why they opposed the easing of these particular restrictions under the general community quarantine (GCQ).

“We will express our reservations and probably appeal the reopening of cinemas to the IATF,” Olivarez said.

Health experts say that SARS-CoV-2, the virus that causes the severe respiratory disease, is more easily transmitted in enclosed areas, especially those that are poorly ventilated.

“We have apprehensions about opening establishments in enclosed spaces, especially those that are fully air-conditioned, based on our consultations with health experts and our own epidemiology units,” Olivarez said. “But reopening of open spaces, such as parks, we have no objection to those.”

Olivarez said that he was in talks with Benhur Abalos, the Metropolitan Manila Development Authority (MMDA) chair, and that the MMC would relay its objections to the IATF.

The MMC, the policy-making body of the MMDA, is composed of the 17 mayors in Metro Manila as well as representatives from national government agencies.

The IATF’s Resolution No. 99 issued on Feb. 11 allowed the reopening of cinemas in GCQ areas, including Metro Manila, starting Feb. 15, subject to guidelines from the Department of Health and local government units (LGUs).

Olivarez, however, said the resolution would not yet take effect on Monday, as the local governments have yet to draft their implementing rules through ordinances in consultation with the IATF. 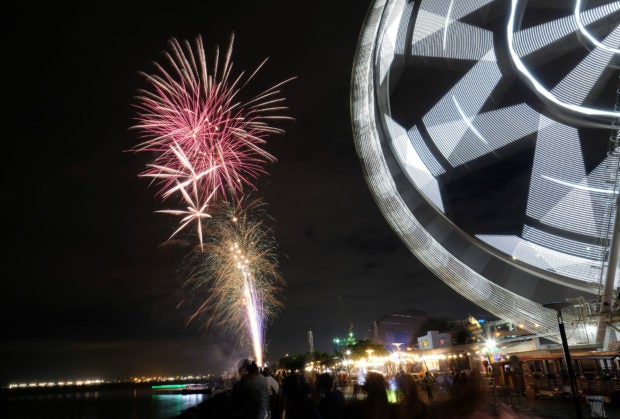 FIRED UP FOR RECOVERY Fireworks serve up a pre-Valentine’s Day spectacle for a thinner-than-usual crowd outside SM Mall of Asia in Pasay City on Saturday night. More businesses in Metro Manila can reopen next week but local governments are still apprehensive about lifting restrictions on movie houses and other enclosed leisure venues. —GRIG C. MONTEGRANDE

He said he was “personally OK” with people gathering in DOT-accredited establishments, including MICE, as long as these accommodate only 30 percent of their capacity.

The mayors also objected to the reopening of arcades, Olivarez said, noting that children were not even allowed to go outside their residences under GCQ.

LGUs in NCR currently allow only persons age 18 to 65 to go outside their homes.

According to Olivarez, they may recommend lowering the age requirement for individuals who may be authorized to go out of their residences from 18 to 15.

He would also recommend maintaining GCQ until the end of March. “Vaccines would be rolled out soon. I am appealing that we wait for the public to be vaccinated first before further relaxing the quarantine status in NCR,” he said.

The MMC will meet either this Sunday or early next week to discuss their recommendation to the IATF on the proposed quarantine status of Metro Manila starting March 1.

Reacting to the latest IATF regulations, Rep. Salvador Belaro Jr. of 1-Ang Edukasyon party list said the government should reopen colleges and universities in localities with low risks of coronavirus transmission instead of encouraging children to visit malls to reopen the economy.

“Daily life in many of the provincial cities and towns revolve around campuses. If the goal is to reopen the economy, let the college students go back to school first,” Belaro said in a statement on Saturday.

Belaro said college students were adults who were allowed to go out of their residences, but junior and senior high school students, and grade school pupils are minors who “should not be roaming around yet.”

If they are allowed to reopen, colleges and universities must strictly enforce the minimum health standards to prevent infections, including the proper wearing of masks and face shields.

He noted that malls were self-contained economic ecosystems encased in buildings with recirculated air. In contrast, stores and shops around universities and colleges are mostly open air, he said.

He said eateries, barber shops, photocopying stalls, sari-sari stores and internet shops are “hubs of the common folk and thousands of college students” who stand to benefit from the reopening of these schools in low-risk areas.

“These common folk are from the low income and poor who are most adversely affected by the pandemic and community quarantines. They need the colleges and universities to reopen,” Belaro said.

Prior to reopening, however, authorities must first inspect school dormitories, Belaro said. Crowded common rooms are “risky,” he said, suggesting that dorms should operate at a maximum capacity of only 50 percent. —WITH A REPORT FROM JULIE M. AURELIO