Senators were distressed that no supply contract for the purchase of COVID-19 vaccines has been signed so far due to snail-paced government negotiations with drug manufacturers, while Congress leaders pushed a bill to allow local governments to make advance payments for shots beyond the spending limits set by the procurement law.

Senate Minority Leader Franklin Drilon on Friday said the absence of a completed supply agreement months after vaccines became available was “a cause of concern” that explained why Filipinos were unhappy with their government’s COVID-19 response as shown in a recent survey among Southeast Asians.

“Our vaccine procurement strategy deserves a second look,” he told the Inquirer.

Sen. Risa Hontiveros said the situation was “incredibly distressing, and it is creating public confusion and anxiety.”

“When will the vaccination program truly start? Other countries have rolled out their vaccination program, and they have inoculated millions, but we are still in the middle of negotiations for a final supply agreement,” she told the Inquirer.

During a Senate hearing on Thursday, Carlito Galvez Jr., the chief implementer of the COVID-19 task force and head of the national vaccination program, disclosed that no supply agreement had been sealed between the Philippines and any of the vaccine manufacturers. 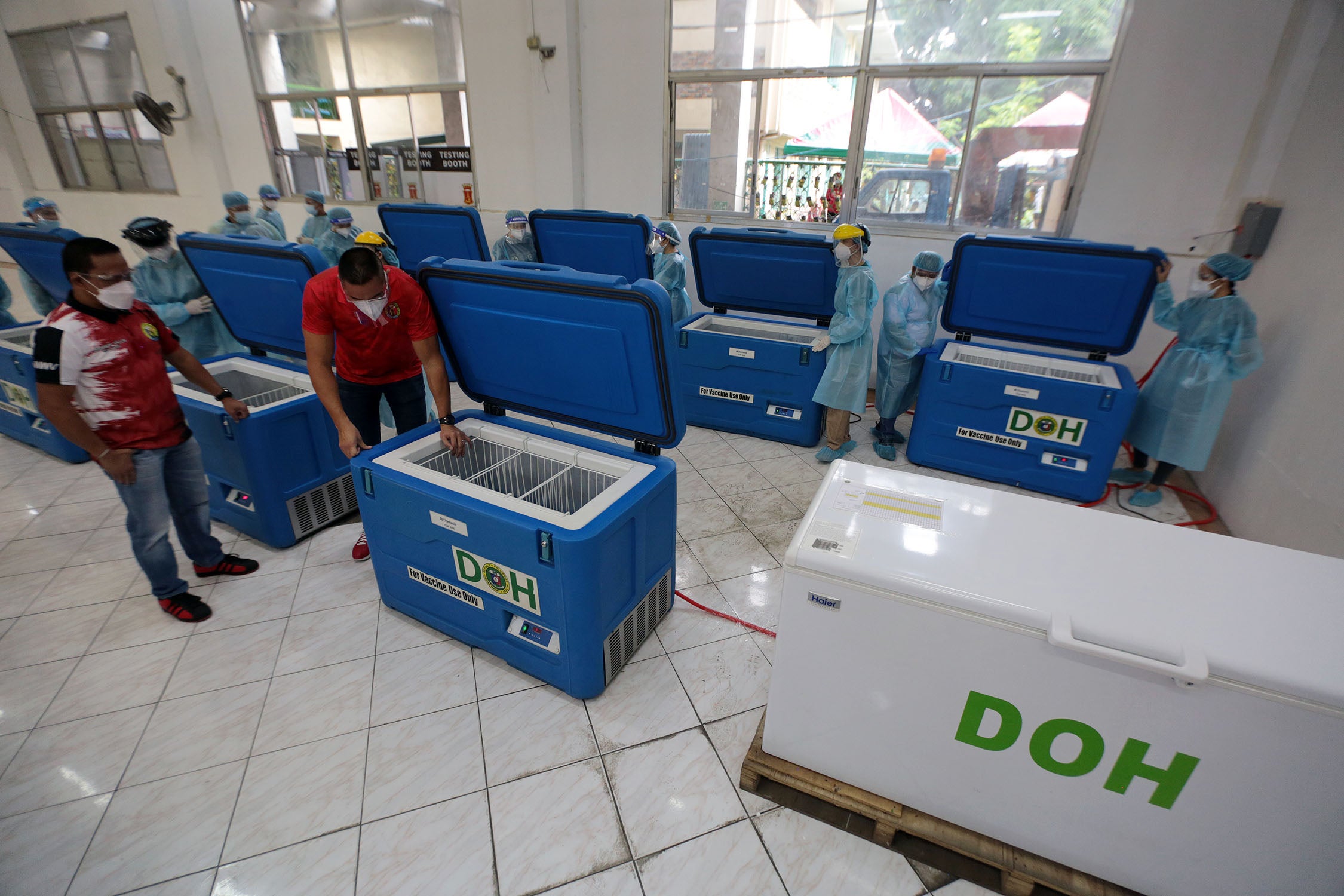 GETTING READY San Juan City Mayor Francis Zamora (center) inspects a cold storage bin where COVID-19 vaccines would be kept. Senate and House bills allow local governments to procure their own vaccines and make advance payments of up to 50 percent of the contract price. —GRIG C. MONTEGRANDE

“We do not have any supply agreement yet, we are still accomplishing it,” Galvez said. “The firm agreement that we have is through the term sheet. We have more or less 108 million doses we have been negotiating,” he said.

“Other than the donated vaccines which are scheduled on Feb. 23 to arrive and also the Pfizer [vaccine] of 117,000 doses expected to arrive as soon as all the documents have been completed and have been submitted to COVAX and we’re just waiting for the final draft,” Duque said.

“The Feb 23rd arrival of the Sinovac vaccines will amount to about 600,000. These are so far the indicative volumes that will be used for our initial rollout. But in terms of the supply agreement, there has been no signed supply agreement,” he added.

Presidential spokesperson Harry Roque said there was no reason to be concerned even if no supply agreement had been signed because a term sheet “is a perfected contract to supply and to buy.”

According to him, a supply agreement is the “contract of sale.”

Lawmakers were concerned that in the absence of supply agreements, the Philippines would fall far behind other countries in Southeast Asia in inoculating their citizens. Singapore and Indonesia had started their mass vaccinations.

A private sector and local government initiative had sealed the deal for the delivery of 17 million doses of the AstraZeneca vaccine as early as May.

“That is done, and its paid for,” business leader Joey Concepcion told the Inquirer.

Of the 17 million shots, around 15 million would go to local governments. Under the tripartite agreement among the national government, the private sector and AstraZeneca, half the remainder would be donated to the government and the other half would go to private companies.

Under Zubiri’s Senate Bill No. 2042, provinces, cities and municipalities may directly purchase these vaccines and “secure other goods and services necessary for their storage, transport and distribution.”

“For these purposes, provinces, cities and municipalities may advance payment of not more than 50 percent of the contract price if required by the supplier, manufacturer, distributor, contractor or consultant,” according to the bill.

In a statement on Friday, Zubiri said around 70 local governments were negotiating with vaccine suppliers and needed to make advance payments. “Otherwise,” he said, “we will lose the allocation.”

“They are requesting that they also be exempted from the requirement of purchasing of goods and services from suppliers with the lowest bid. This is not possible with the COVID-19 vaccine as it is supply-driven. It is impossible because the lowest price is not always available,” he said.

In filing House Bill No. 8648, they said that “the speedy procurement and effective administration of vaccines” were the next crucial steps in fighting COVID-19.

The bill also creates an indemnification fund for vaccine recipients who may suffer side effects.

The Senate and House measures are strongly supported by Malacañang, which called for their immediate passage.

What is more important than the President’s urgent certification of the measures is his message that without them, the delivery of vaccines from the global procurement mechanism Covax facility could be delayed, Roque said.

The procurement law is a hurdle to speedy vaccine purchases from manufacturers who ask for advance payments of up to 50 percent.

Budget Secretary Wendel Avisado on Friday said he was backing moves similar to measures pending in Congress to remove the payment cap.

Republic Act No. 9184, or the Government Procurement Reform Act, allows advance payments of a maximum of only 15 percent of the cost of a government-financed project.

However, borrowings from multilateral lenders could be used for advance payments exceeding the cap as foreign-assisted projects were exempted from the law.

According to the implementing guidelines of RA 9184, Presidential Decree No. 1445 mandates advance payments only after prior approval of the President, but he could also direct an adjustment in the ceiling “to address contingencies arising from natural or man-made calamities in areas where a “state of calamity” has been declared.

The President’s nationwide state of calamity declaration last year due to the pandemic was extended to September this year.

To make advance vaccine payments, the Department of Finance renegotiated two loans covering COVID-19 emergency response so that these could also include vaccine procurement and distribution—$125 million from the Asian Development Bank (ADB) and $100 million from the World Bank.

As the Philippines needed to settle $50 million in advance payments last month for as many as six vaccine supply agreements, the ADB and the World Bank realigned $25 million and $30 million, respectively, from these loans for mass vaccination.

Documents dated Feb. 11 seen by the Inquirer showed that a $500-million loan for the additional financing needs were expected to be approved by the World Bank’s board on March 11.

Finance Undersecretary Mark Dennis Joven was quoted by the Department of Health as saying that “the Philippines is currently in the process of securing a total of $425-million loan from the ADB purely for vaccinations alone, including logistics and manufacturing.”

A representative of the ADB’s Philippine office clarified that the amount mentioned by Joven meant a fresh $400-million loan under the lender’s regional scheme called Asia-Pacific Vaccine Access Facility, on top of the $25 million in realigned financing from the Heal COVID-19 project. —WITH REPORTS FROM LEILA B. SALAVERRIA, BEN O. DE VERA, ROY STEPHEN C. CANIVEL AND JULIE M. AURELIO