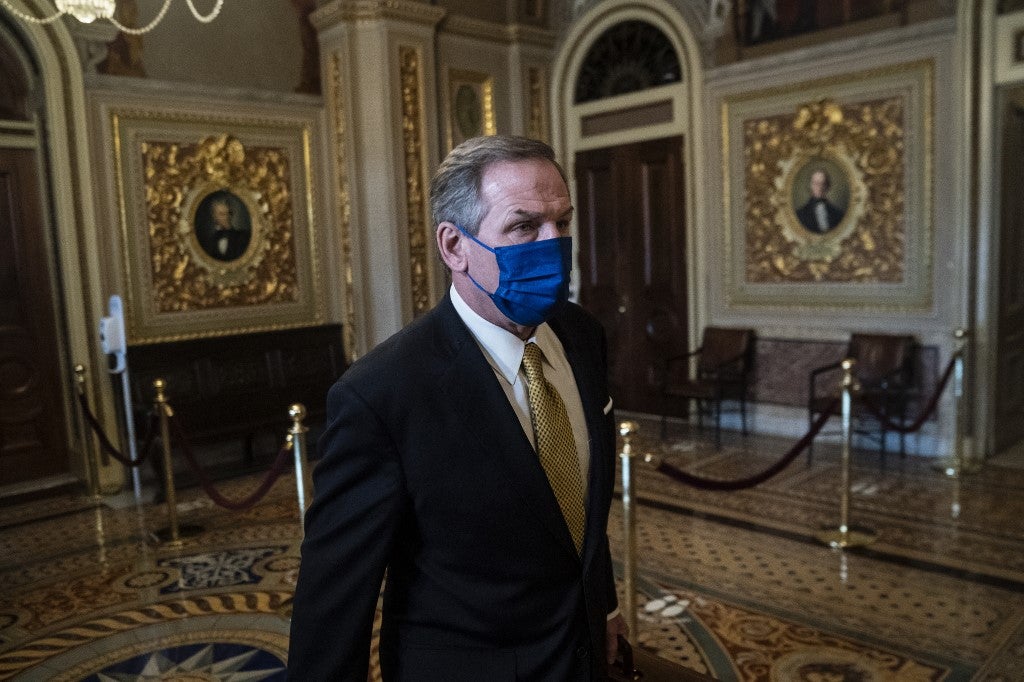 “The article of impeachment now before the Senate is an unjust and blatantly unconstitutional act of political vengeance,” attorney Michael van der Veen said.

“The Senate should promptly and decisively vote to reject it.”

Trump’s lawyers wrapped up their case after just three hours.

Senators, who act as jurors in impeachment trials, were next due to question the two sides, with a verdict expected to come by the weekend at the latest.

The impeachment team argues that Trump deliberately stoked national tension after losing reelection to Joe Biden on November 3 with a campaign of lies claiming there had been mass voter fraud.

On January 6 he staged a fiery rally near the White House, calling on the crowd to march on Congress, which was in the process of certifying Biden’s victory.

The mob then charged the Capitol building, disrupting the certification. Five people, including a police officer and a woman shot during the unrest, died as a result of the mayhem.

Impeachment managers say Trump, who has never expressed remorse for his encouragement of the violent crowd, is so dangerous he should be barred from holding office again.

It would take a two-thirds majority to convict, meaning 17 Republicans would need to join the Senate’s 50 Democrats. This is highly unlikely.

However, if even a handful of Republicans vote to convict, it would be a historic mark against Trump, fueling civil war within his party over whether to pursue his populist, divisive vision or return to more moderate values.

The former president’s lawyers argued that his speech on January 6 telling supporters to “fight” was merely rhetorical.

They also argue that the trial itself is unconstitutional because Trump is now out of office and that Democrats’ true aim is to remove him from the political scene.

“Let us be clear: this trial is about far more than president Trump,” defense lawyer Bruce Castor said.

“It is about canceling 75 million Trump voters, and criminalizing political viewpoints. That is what this trial is really about.”

Seeking to turn the table on the Democrats’ use of video evidence to link Trump to the mayhem, defense lawyers played their own compilations showing Democratic lawmakers at different times using the word “fight.”

Democratic senators, along with President Joe Biden and Vice President Kamala Harris — when they were on the 2020 campaign trail — were among those shown using the word in speeches and on television.

Trump’s lawyer David Schoen addressed the senators and House members in charge of prosecuting the case against Trump, suggesting that “every single one of you” had also used the word in political discourse.

“That’s OK, you didn’t do anything wrong. It’s a word people use,” Schoen told them. “But please, stop the hypocrisy.”

The video footage at the heart of the impeachment managers’ case showed the crowd in the Capitol on January 6 hunting down opponents of Trump as senior figures, including then vice president Mike Pence, fled for safety.

Schoen mocked the video as “an entertainment package” and said Trump could not possibly be held responsible for the actions of the demonstrators.

But lead impeachment manager Jamie Raskin pointed out that the Republican leader had been encouraging extremism even in the lead-up to Election Day by constantly undermining public faith in the election process.

“This pro-Trump insurrection did not spring out of thin air,” Raskin said. “This was not the first time Donald Trump had inflamed and incited a mob.”

He said it was imperative the Senate convict Trump and bar him from running for the White House again in 2024 or face the risk of the same kind of behavior being repeated.

“Would you bet the future of your democracy on that?”

Earlier, Biden told reporters at the White House that he was “anxious to see what my Republican friends do, if they stand up,” when it comes to the verdict.

There was little sign of an impending breakdown in the Trump firewall, but the verdict will make many in the party uncomfortable whichever way it goes.

Republican Senator Bill Cassidy of Louisiana said evidence shown by House managers was “powerful,” but “how that influences final decisions remains to be seen.”

Other Republican senators have clearly already made up their minds and do not intend to break with Trump, who has threatened to derail their careers should they back impeachment.